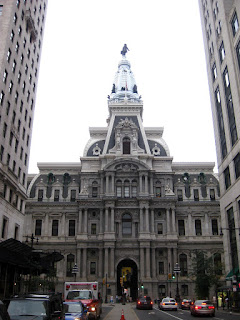 There’s only one thing I don’t love about the East Coast Black Age of Comics Convention...and that’s the seven-plus-hour drive across Pennsylvania to Philadelphia. Naturally, I’ve considered flying to the event, but I’m trying to limit my air travel these days. I have grown weary of the connecting flights that extend the time it takes to get from A to B. A nervous flier at best, I’m uncomfortable in those cramped seats. I’ve seen too many examples of bullying and incompetence from airlines and government agencies. Thus is the sad example of a President Donald Trump.

In the past, I've left my home in Medina Ohio at some ridiculously early hour on Friday to get to my Philadelphia hotel early enough to relax and freshen up for that evening's ECBACC reception. This year, because Sainted Wife Barb, who is much smarter than I am, was traveling with me, we planned to drive about two-thirds of the way on Thursday night and finish the trip the following morning.

We left home about four Thursday afternoon so Barb could put in a full day at her job and I could finish a column. We also had to deliver laundry to the care facility where Barb's mother now lives. We got on the Ohio Turnpike around five.

Our Thursday night destination was the Clarion Hotel and Conference Center in more or less Harrisburg. The place was actually located in New Cumberland. We made decent time on our drive there, but we didn’t arrive until after the hotel restaurant closed. That and the lack of room service were minor annoyances.

The major annoyance was when we walked into a room and it was less a room and more a sauna. The heat was oppressive and we could not get the thermostat to respond to our desperate need to not have our blood boil in our bodies and emerge through our ears and elsewhere as steam. I went to the phone to call the front desk and ask them to save us before we melted.

Speaking of annoyance, that was the immediate reaction of the front desk clerk when we told him about the problems. He said he could come to the room and adjust the thermostat, adding that the person in the room before us wanted it set for heat. And, yes, I’ve never heard of a hotel thermostat that could only do one or the another. I also asked the clerk is he was going to install a phone in that room. With a final flourish of annoyance, he gave us another room. There was much rolling of eyes on my part.

Despite this introduction to the hotel, it was a very nice place. The bed was comfortable. The grounds were attractive. There was a free hot breakfast buffet that was outstanding. I complimented the woman who was keeping it well stocked. 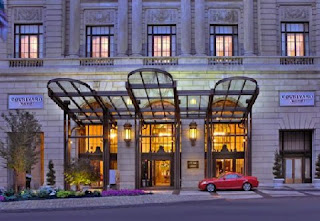 We made decent time driving the rest of the way to Philadelphia and the Courtyard Marriott where we would be staying. Located on North Juniper Street, the hotel is one of three Marriott hotels in a row. Talk about owning the block...or three.

The Courtyard was a beautiful place with nice rooms. Not only was it relatively close to where the ECBACC events would be held, but it was across the street from the wondrous Reading Terminal Market and in close proximity to the Philadelphia City Hall (shown at the top of today's blog) and many other areas of interest.

Once we were unpacked, Barb and I decided to do some sightseeing. Barb has never been to Philadelphia before and I had never visited long enough to see any of the sights. 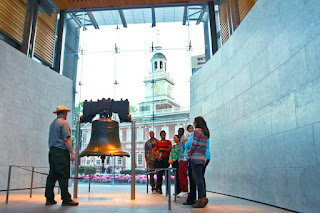 Our first destination was the Liberty Bell Center at 6th and Market Streets, just a short walk from our hotel. Admission to the center is free, though we did have to wait a reasonable amount of time before we could enter the center. However, there were exhibits we could check out while we were waiting and a special performance.

Right behind us in the line was a group of students. They had their own tour guide, an African-American man who seemed to be around my age or maybe a tad older. He was animated, funny and informative as he related facts and stories about the dawn of American democracy. The man was a natural storyteller. I don’t know if those students appreciated him, but Barb and sure did. Inside the Center, after we’d seen the Liberty Bell, I went up to the man, told him he was a delight and thanked him. This pleased him greatly.

From there, we went to the Independence Visitor Center. It was just across the street and filled with exhibits. However, as we only had a limited amount of time, we only stayed long enough to buy tickets for the Big Bus Philadelphia Tour. 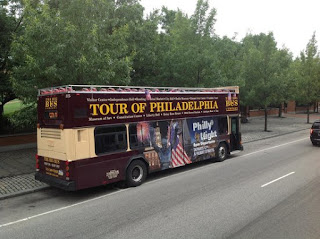 The “Big Bus” was a double-decker bus that made 27 stops along its route. You could get off anywhere on the route and then get back on when the next bus rolled to the stop. The stops included the Betsy Ross House, the United States Mint, Ben Franklin’s Grave, the great Chinatown area (which we definitely want to visit on some future visit) and the “Rocky Steps” made famous by the Sylvester Stallone movie. Our tour guide was personable and presented facts and trivia in an entertaining manner. He even pointed out the headquarters of the Philadelphia Police Department, which was often filmed for Cold Case, a TV show Barb and I used to watch.

The only negatives to the bus tour: we hit traffic jams more than once...and we were sitting on the top of the bus in temperatures that never dropped below ninety degrees. That second one was all on Barb, but, despite the brain-boiling heat, I had to admit the views were spectacular. 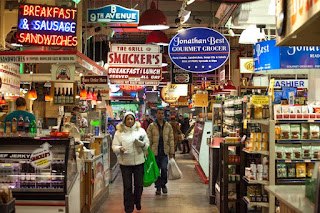 We stayed on the bus through the 27 stops and beyond, getting off at the Reading Terminal Market. The Reading Railroad opened this  Philadelphia landmark in 1893. Back then, the place had nearly 800 spaces for vendors and was praised as the greatest food market in the world.

The Market suffered when the Railroad went bankrupt in 1971. By the end of the decade, only 23 merchant stands were opened. This would not be the case for long.

The Market turnaround started in the 1980s. It has been rebuilt to strict historical preservation standards. It is now home to nearly eighty independent small businesses featuring bakeries, beverages, books, crafts, dairy and cheese, housewares, meats and poultry, produce, restaurants and specialty foods. You could spend days in the Market and only begin to sample all it has to offer. Honestly, everything looked delicious, even foods I would never ever think of eating like lobsters and pigs feet.

Barb and I had a late lunch that Friday afternoon. She enjoyed the Philly cheesesteak from Spataro’s Cheesesteaks while I dined on a cheeseburger from Hunger Burger. The latter donates part of every sale to community programs. On our way out, we bought bananas and grapes from Iovine Brothers Produce. All in all, great food at very reasonable prices.

We went back to our hotel room to relax for a bit and get ready for the ECBACC reception and kick-off at the TECH Freire Charter School on nearby North Broad Street. The evening event included the 2016 Glyph Comics Awards and the presenting of several Pioneer Lifetime Achievement Awards. Come back tomorrow and I’ll tell you all about that exciting evening.

Posted by Tony Isabella at 6:47 AM