THIS AND THAT ON A THURSDAY 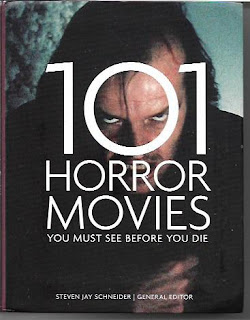 101 Horror Movies You Must See Before You Die [Apple Press; $14.93] is a pocket-size chronological guide to some of the best and most influential fear films of all time. It starts with an introduction by general editor Steven Jay Schneider, then moves on to 1919's The Cabinet of  Dr. Caligari and 100 more films, concluding with 2014's It Follows.

Each brief chapter is four pages long: movie poster, two pages of history and commentary on each film and a scene from the subject at hand. It’s a suitable road map for exploring horror movies through the decades...and perfect for reading when you only have a few free moments at a time. The book’s forty reviewers do a fine job telling the reader enough about the movies to allow said readers to decide if an individual film is something they might enjoy. If there’s ever comes a time in my life when I actually have the time to watch more horror movies, I’ll be using this as a guide.

By the way, if you’re going to take my “pocket-size” description to heart, you’d best make sure you have a big pocket. The 416-page book measures approximately five by six inches and is about an inch and a half thick. That’ll make your pants sag.

I liked this book so much I also purchased 101 Action Movies You Must See Before You Die and 101 Sci-Fi Movies You Must See Before You Die. The only downside to these fine little tomes is that they are putting a lot of pressure on me to either watch a lot of movies or stay alive for many more years to come. Given my druthers, I’ll take the second option. 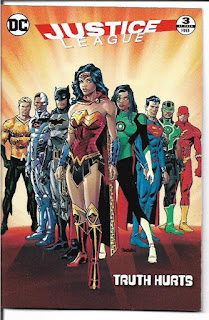 I didn’t realize that the Justice League had teamed up with General Mills breakfast cereals until I spotted a specially-marked box of Honey Nut Cheerios with that cereal’s spokes-bee dressed as Batman. Inside the box was a 28-page, 4 inches by 6 inches comic book, one of four in the series.

While trying to stop a volcano from destroying an island, the eight heroes suddenly turn on one another. The cause of their enmity is the “Stream of Ruthlessness,” a revelation rather clumsily revealed near the end of the story. The “B” plot - and I do appreciate that this tale was not only done-in-one but actually had a “B” plot that connected to the current adventure - had Wonder Woman remembering a few unhappy memories from her youth and realizing how important real friendships can be. It’s not a great story, but it was still entertaining.

Some quick research shows issues of this mini-comics mini-series were also in boxes of Cocoa Puffs, Trix, Multi-Grain Cheerios and Lucky Charms. Except for the Multi-Grain Cheerios box which shows Wonder Woman, the other boxes all have their mascots dressed like DC heroes. The backs of the five boxes combine to form a five-part  mural of the Justice League. This all rates very high on my “cool meter." I’ll be keeping an eye out for the other boxes and comics in this promotion. 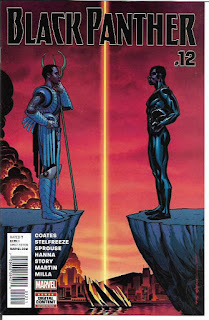 I read Black Panther #9-12 [Marvel; $3.99] recently, which brings me close to being current on the series. What intrigues me most is the continuing evolution of Wakanda as T’Challa and allies face a rebellion and the much larger challenge of creating a new Wakandan society, one that protects and serves all its people. If it works out in a comic book, maybe we can apply its lessons to a USA that is currently ruled by some of the most evil people in our nation. But I digress.

Sadly, I can’t say that same for Black Panther: World of Wakanda [also $3.99 per issue], which seems to be devoted to exploring the back stories of what has happened in the lead Black Panther title. It’s not that this spin-off is poorly written or drawn. The writing and art are fine. It just doesn’t excite me. I would much rather it featured stories showing what’s going on right now in the Wakanda that isn’t front and center in the main series. 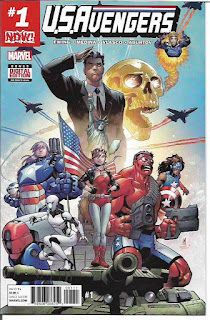 U.S.Avengers [Marvel; $3.99] is one of those goofy super-team books that could drive you mad if you think too much about it. Understand I accept some responsibility for this because I wrote the original Champions, the current version of which is a much better book than the one I wrote back in the 1970s.

“Goofy” doesn’t mean “bad” to me. As near as I can piece together from U.S.Avengers #1-4 and Wikipedia, the timeline for this group goes something like this:

Amazingly wealthy mutant Roberto da Costa (aka Sunspot) bought out the villainous Advanced Idea Mechanics and turned into the force-for-good Avengers Idea Mechanics. It has now merged with the U.S. government to become American Intelligence Mechanics. Oh, yeah, and da Costa changed his super-hero identity to Citizen V because why not take the name of an ex-Nazi who was posting as a good guy when he created the Thunderbolts? Ow, my head hurts.

Written by Al Ewing, who is a fine writer, and drawn by the equally fine Paco Medina (pencils) and Juan Vlasco (inks), this goofy book is quite entertaining. It’s not going to be on my top ten list, but I’m enjoying it.

Besides Citizen V, the team consists of Iron Patriot (yet another hero using the name of a villain), Red Hulk (a new version with a hilarious mustache and a one-hour power limit), Cannonball (former New Mutant, former X-Force member, former Avenger, I think), the unbeatable Squirrel Girl (who I adore but who probably shouldn’t be the member of any team), and Enigma/Pod (whose history is way too convoluted for me to follow at the moment). As General Robert L. Maverick, Red Hulk was the commander of a government project that turned a soldier into American Kaiju. We need to see more American Kaiju in Marvel’s comic books and movies and TV shows and cartoons and novels and even radio dramas.

Though I’m sometimes confused while reading U.S.Avengers, I’m still getting a kick out of the book. I’ll keep reading it.

Posted by Tony Isabella at 8:03 AM