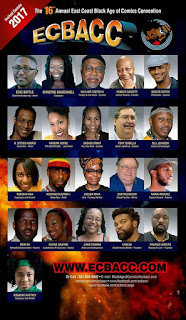 The East Coast Black Age of Comics Convention (ECBACC) is one of my favorite events of the year. This year, I’m even more excited than usual because Sainted Wife Barb will be coming to the convention, because I’ll be able to introduce her to my long-time friend Don McGregor, because I’ll be meeting Don’s wife Marsha for the first time and because I’m receiving a Pioneer/Lifetime Achievement Award from the convention. I’m also more overwhelmed than ever before on account of there’s so much going on in my life that I haven’t had a chance to do much preparation. Yow!

Let’s start with the basics:

ECBACC kicks off on Friday, May 19, with its opening reception and awards presentation at TECH Freire Charter School, 2221 N. Broad Street in Philadelphia, Pennsylvania. The reception runs 6:30 pm to 9 pm. Besides receiving an award, I’m scheduled to present a Glyph Award for Best Artist.

The convention itself is a one-day effect taking place on Saturday, May 20, from 11 am to 7 pm at TECH Freire Charter School. Besides having a table at the convention, I’ll also be doing other event-related stuff.

McGregor and I are at ECBACC because, according to Michael Davis, a master of the universe, we are “two of the best Black writers in the industry.” If Michael says it, it’s word.

ECBACC is more than a convention. It’s a community of creators and educators and fans. I am constantly encouraged and humbled by the support I have received from this community.

At the opening reception, there will be five recipients of the ECBACC Pioneer/Lifetime Achievement Award.

Billy Graham (1935-1999), who was the most prominent and one of the very few African-American creators working in the comics industry in the late 1960s and early 1970s.

Don McGregor, one of the most groundbreaking writers of the 1970s and beyond. His work on the Black Panther, Killraven, Detectives Inc, Sabre and many other comics showed a commitment to diversity that has seldom been equaled.

Tony Isabella. Who you probably have heard of, what with reading this blog and all.

M. Akil Dukon. Filmmaker, director, producer, editor and media arts educator. If memory serves, at last year’s event, she showed us a bit of her feature-length Invisible Universe documentary about the history of representations of black people in science fiction and movies.

This award is the most significant award I’ve ever received. I am honored to be included among these extraordinary creators. When I accept this award, I will also be accepting the responsibility to continue and expand upon the work I’ve done to date.

The Glyph Awards highlight “the best in comics made by, for and about people of color from the preceding calendar year. It strives to honor those who have made the greatest contributions to the comics medium in terms of both critical and commercial impact.” In years past, the nominations list has served as my reading list for the rest of the year. Looking at the nominees, that will certainly be the case this year.

Saturday will be a busy day for anyone who attends ECBACC, be they guest or fan. The main area is a “comic book marketplace,” but it will offer much more than comic books. Visitors to the convention will see art, crafts, videos and other creative works. At my table, you will find Black Lightning Volume One and other books and comics I’ve written. I’ll be signing Isabella-written stuff for anyone who requests it. I’ll answer your questions on my work and on comics in general, though there will be some questions I can’t answer due to non-disclosure agreements. While I can’t read unpublished stories, I’ll be happy to look at artist portfolios.

There will be panel discussions on a variety of subjects. I’ll be on a creators panel discussing the science of storytelling. Regina Sawyer will be the facilitator of the panel. Besides her and I, the panel includes artist N. Steven Harris and author Robert Garrett. We will attempt to answer questions like:

Is there a science to storytelling? How do these professionals use images and words to convey their ideas?

Thrilling AfriCoz cosplay will be on view throughout ECBACC. This  is always one of the coolest aspects of the event and, this year, I have been asked to serve as a judge alongside Garrett, creator Jamar Nicholas, artist/digital painter Sheeba Maya and writer and creator Uraeus. Shenkarr Davis is the facilitator.

ECBACC says: “Many may Coz but only a few will AfriCoz!” 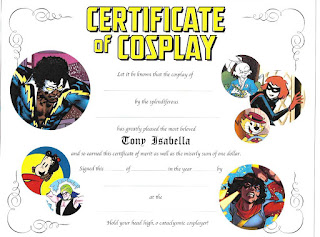 Speaking of cosplay, as I will do at every convention I attend, I will be handing out my special “Certificate of Cosplay” to anyone who cosplays as one of the fifty-plus characters on my cosplaying list. You can find the details here.

Two of the coolest aspects of ECBACC are its Comic Book Workshops and its Kids Library Zone. The workshop programs will give future creators some hands-on instruction in the skills they will need to pursue their dreams. The library zone is designed to encourage and inspire young readers. One of these years I hope to find the time to sit in on both.

Speaking of hoping to find time...look at the incredible guest list for this year’s ECBACC. I’d love to chat with each and every one of them. I never want to stop learning...or reach a point in my life where I think I can stop learning. I always want to bring something new to my work.

As you’ve gathered, I’m looking forward to ECBACC. I’ve never come back from one of these conventions without feeling revitalized and ready to get back to work even harder. It’s more than a convention to me. It gives me encouragement and energy and the will to always go forward in every thing I do.

I hope some of my bloggy thing readers will be able to come to the convention and experience the glory and wonder that is ECBACC. It is unlike any convention you’ve ever attended. You will recognize that from the moment you walk into the event.

Posted by Tony Isabella at 7:19 AM