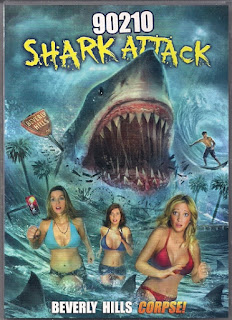 90210 Shark Attack [2014] hooked me with its title and its DVD box art. The title made me think this might be a silly shark movie that would be fun to watch. The box art with a giant shark knocking over a Beverly Hills sign made me chuckle. So I ordered the movie from Amazon and watched it within days of its arrival.

90210 Shark Attack has a decent story swimming around in its brief 75-minute run time, but it never comes remotely close to turning the story into an entertaining film. Let me give you the Tony Isabella version of the story:

One of the students in a special oceanic anthropology session has a secret. Her professor and classmates know her missing father was both a scientist and a con man who often cheated and stole from the people he studied. He got his hooks into a tribe that worshiped a shark god and they showed him the waters in which their god lives. He then brought a group of wealthy “sportsmen” to the place so they could hunt and kill the shark.

The tribe was angry and cursed the scientist’s young daughter. She can turn into a great white shark. She may have killed her father. She definitely has issues with her cruel classmates...and with her professor, who she learns is planning to exploit the girl’s tragic life story for a book and movie.

That could have been a good movie, but it’s not 90210 Shark Attack. I’ll get to that in a moment.

The horror began as soon as the DVD started, even though the actual movie was close to two dozen trailers away. In a moment of madness, I decided to watch those trailers before the movie...and almost all of those movies shared the same elements.

All the movies were from Rapid Heart Productions, which I assume is a name derived from the artery-stopping fear a viewer experiences on realizing this viewing session will not end well.

Most of the movies were filmed in and around the same house, which I assume is because it was either owned by someone from the company or an abandoned property that the filmmakers could sneak into for the no more than a day-and-a-half of shooting these movies likely needed. Two days tops.

All of the movies were directed by David DeCoteau, who used to work for Roger Corman. DeCoteau has a impressively long history in “B” and lesser grade movies. It appears he made these Rapid Heart films from 2011 to 2014. He is kind of sort of like my beloved The Asylum if The Asylum was just one strange man who made lousy amateur movies for only his own pleasure.

I don’t usually ascribe personal issues to a creator’s work, but I found myself wondering if DeCoteau was a deeply closed gay men, a very lonely gay man, or a man who wants to be a cougar woman. I would tell him it gets better, but I’m not sure it will get better if he keeps making movies as lousy as 90210 Shark Attack.

Which brings us back to the movie itself...

Donna Wilkes plays the predator professor. She played a young woman in Jaws 2 (1978) and also appeared in other movies and TV shows up to 1991. Then she took two decades off from acting. She makes her marks and performs her lines, but it’s a decent performance only by comparison to the terrible performances of her cast mates.

Stephanie Shemanski plays shark-girl Alyssa. Her head and shoulders transform into the CGI head of a great white shark who then bites off the heads and necks of her victims. The same CGI effect is used for every killing.

Alyssa’s victims are the entire rest of the cast, who were surely grateful for an end to the misery of being in this movie.

Most of the victims are killed in or near a hot tub. We don’t see any actual shark-on-head-and-neck violence. The camera always cuts away. We see a little blood spatter and one conservatively framed headless torso. You could see more blood in a koi pond.

The movie ends abruptly as the final victim is about to get head-chomped. Alyssa confronts the deceiving Pamela and asks her to give her a kiss as she summons the CGI effect.

Let’s talk for a moment. If you skipped the paragraphs between the SPOILERS AHEAD and END SPOILERS, go back and read them. Because the only way my buying and watching this movie isn’t a colossal waste of my money and time is if I saved you, my beloved bloggy readers, from that dire fate. I do it for you.

I do it all for you.

Posted by Tony Isabella at 7:50 AM