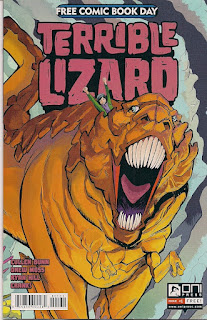 I read another batch of the free Free Comic Book Day comic books I got from my pal Bob Hoskins and the cool crew of Stormwatch Comics in West Berlin, New Jersey. Let’s get right to it...

There were three contenders for my Best FCBD Issue of the Week, but I had to go with Terrible Lizard #1 from Oni Press. Written by Cullen Bunn with art by Drew Moss and colors by Ryan Hill, this is an all-ages series about a girl and her tyrannosaurus.

The two of them meet cute. Dad is a scientist working on a temporal displacement project for the government. Jess is a lonely girl who has no friends because of the demands of her father’s work. Wrex is the tyrannosaurus who bonds with Jess because she’s the first human it meets when it’s dragged growling into our time and also because she’s the only human not trying to kill it.  After reading just the one issue, I love this series.

So...does Terrible Lizard meet my criteria for a good Free Comic Book Day issue? It sure does. It features quality material, it is complete accessible to new readers and, judging from my reaction to it, it will entice new readers to buy the comic book. My reaction was to immediately order the trade paperback.

The first runner-up was Mercury Heat from Avatar Press. Launching in July as a monthly, this sci-fi series is set on Mercury in the future. It’s written by Kieron Gillen with art by Omar Francia and, yes, I did say it was set on Mercury, which isn’t generally thought of a great planet for human life. Gillen explains it all in the 19 pages of notes that follow the 11 pages of story that leads off the giveaway. Now I’m not a scientist, nor am I a right-wing science-denying dickweed, but what I read was more than enough for me to willingly suspend my disbelief and enjoy this and any future issues of Mercury Head I might read.

Luiza Bora is the protagonist of Mercury Heat. She’s a tough woman who wanted to be a cop on Earth but was told she wasn’t suited for such work. Mercury isn’t nearly as picky.

Mercury Heat isn’t an all-ages book, but it’s perfectly accessible for teen and older readers. Luiza is a good character and she could be a great character. The writing and art are first-rate.  I’m not an avid reader of science fiction these days, but I saw enough in this free comic book that I want to read more. Let’s score this as a win for Avatar Press.

The second runner-up this week is Tales of Honor #0 from Top Cow. This issue features the 17-page “Bred to Kill” by Matt Hawkins and artist Linda Sejic. The story is set in something called the Honor Herrington Universe and, while a text page preceding the story does give a new reader a bit of a leg up into this universe, it doesn’t offer enough information. I had to turn to Wikipedia:

Honor...Harrington is a fictional character invented in 1992 by writer David Weber as the heroine of the eponymous "Honorverse", a universe described in a series of best-selling military science fiction books set between 4003 and 4025 AD.

Harrington is an officer in the Royal Manticoran Navy (RMN), the space navy of the Star Kingdom of Manticore, an interstellar monarchy that counterbalances its relatively small size with superior space combat technology and capability. She has a genius for tactical command, often overcoming significant odds in critical battles and frequently finding herself at the centre of significant military actions. Her dedication to duty and uncompromising performance results in receiving numerous awards and promotions, earning the respect of interstellar empires, and accumulating implacable enemies. She is a skilled martial artist and through her association with her treecat companion Nimitz, develops an empathic sense that assists her in understanding the emotions of those around her.

Even though Tales of Honor #0 didn’t meet all my criteria for what a FCBD issue should be, the story was sufficiently well-told and entertaining enough that it got me to seek out more information on the series myself. As with Avatar’s Mercury Heat, I’m interested in reading more of this character and her universe.

The Legendary Comics 2015 Preview is little more than a catalog of upcoming and existing titles. Some of those titles might interest me, but the nature of this preview doesn’t allow more than a quick sales pitch and a cover for most of the titles...and not much more for others. In my case, my interest comes from either familiarity and appreciation for the creators - Chris Robertson, Steven Grant, Mark Waid and others - or an existing regard for a property being turned into a comic book, such as Godzilla and Pacific Rim. I don’t know if a new reader would have that same level of interest. I have to write this giveaway as less than sufficient for the job at hand.

As always with FCBD giveaways, there are comic books which simply hold no or little interest to me. I can’t judge those with the same confidence I review other titles.

Boom! Studios Ten Year Celebration 2015 is a thick comic that has come-ons for ten different titles. Most of those are adaptations of cartoons or movies which I’ve never seen and will likely never see. Things like Adventure Time and The Regular Show. I know these are popular, but they have no attraction for me. I am familiar with and enjoy Mouse Guard, Peanuts and Garfield. Because I’ve heard great things about it from folks whose opinions I respect, I have a copy of Lumberjanes on its way to me. But I don’t think the two to four pages of each of these features offers enough of a come-on to get a new reader to check them out.

I’ve never been able to get into Sonic the Hedgehog or Mega Man, so this Archie giveaway comic did nothing for me. I also didn’t find it accessible to readers who aren’t already fans of the games or comic books, nor did I find the material included in the issue to be of high quality. As I have it previous years, I would have to rate this giveaway issue a fail.

I feel the same about the Street Fighter Super Combo Special from Capcom and Udon Entertainment. I don’t care about the video games. I didn’t find the material accessible or good. It may well delight those readers who are already into Street Fighter, but I can’t see it enticing any other readers.

I have never watched an entire episode of SpongeBob SquarePants, but I did enjoy reading SpongeBob Freestyle Funnies 2015 from United Plankton Pictures and Bongo Comics. The 22-page lead story was fun, as were the short back-up strips. I don’t see myself watching the cartoon or buying the comic book as a result of reading this issue - time and money are the issues here - but I could see a reader who had a passing interest in the show being won over by this giveaway comic. This FCBD comic succeeds.

I really wanted to like the Drawn & Quarterly FCBD 2015 SuperMutant Magic Academy/Step Aside Pops Combo more than I did. The premise of Jillian Tamaki’s SuperMutant Magic Academy seemed like it would be right in my wheelhouse, but the execution of the short gags left me unimpressed. The Step Aside, Pops gags from Hark! A Vagrant creator Kate Beaton were better but a very strange companion to the Tamaki pages. Ultimately, I think this FCBD giveaway would be confusing to most new readers. It’s not a complete fail, but it’s some distance from being a success.

That’s all for this edition of Free Comic Book Day Friday. I’ll be back tomorrow to talk about a new release from The Asylum. See you then.