THE AGE OF SELFISHNESS 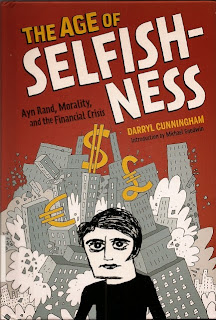 The Age of Selfishness: Ayn Rand, Morality and the Financial Crisis by Darryl Cunningham [Abrams; $17.95] landed on my reading pile via my local library system. Given the dire threat posed to the United States and the world by asses who think the psychotic, tyrannical Rand was some sort of economic and social visionary, I was looking for a book that might explain how anyone who wasn’t a bitter high-school boy could find not just merit in her blatherings but enough merit to make them the basis of public policy.

Here’s what Amazon had to say about the book:

Tracing the emergence of Ayn Rand’s philosophy of objectivism in the 1940s to her present-day influence, Darryl Cunningham’s latest work of graphic-nonfiction investigation leads readers to the heart of the global financial crisis of 2008. Cunningham uses Rand’s biography to illuminate the policies that led to the economic crash in the U.S. and in Europe, and how her philosophy continues to affect today’s politics and policies, starting with her most noted disciple, economist Alan Greenspan (former chairman of the Federal Reserve). Cunningham also shows how right-wing conservatives, libertarians, and the Tea Party movement have co-opted Rand’s teachings (and inherent contradictions) to promote personal gain and profit at the expense of the middle class. Tackling the complexities of economics by distilling them down to a series of concepts accessible to all age groups, Cunningham ultimately delivers a devastating analysis of our current economic world.

Here’s what I have to say:

Cunningham’s book is balanced, though the Rand groupies will never see it that way as he relates some of the awful manipulations she put her husband, lover and closest followers through. He tries to explain the financial criminality and crisis to his readers, doing a pretty good job of it. Some of the comparisons between the U.S. and European situations threw me a but, but a careful reading got me straightened away.

Cunningham doesn’t dismiss conservatism completely and, indeed, he shows where some of its positions could be useful. Unfortunately, in today’s United States where actual conservatives have had their name hijacked by avaricious billionaires, slobbering morons, vile racists and conspiracy-hugging lunatics, any positive applications of conservatism are unlikely to occur.

In the best of books, thinking about Rand and her acolytes can give you migraine headaches and sour stomachs, but, if one must explore her self-absorbed egotism and world view, The Age of Selfishness is the best guide I’ve found to date. I don’t know if “enjoyed” is the right word here, but I did find the book informative, interesting and well-done. I plan to seek out Cunningham’s other books in the very near future.

The bloggy thing has resumed sooner than I expected for the simple reason that writing it makes for a nice break from working on the “memoir” I’m currently writing. My ego is as healthy and maybe more healthy than the next guy’s, but considering and writing about my life is challenging and exhausting. The bloggy thing takes the edge off that.

Among the surprises you’ll find in my "memoir" will be a rare photo of myself and a famous entertainer. This photo has never appeared in print anywhere. The photographer gave me a copy of it many years ago, but that photo was destroyed in a basement flood. She’s making a new copy of it for me and allowing me to publish it in the book. I’m excited about this.

Readers of my Facebook page know that the Cleveland neighborhood in which I grew up has become very dangerous. There has been around a shooting a month for a few years now and the occasional fatality. A little over a week ago, there was a multiple shooting one block from my mother’s house. Four people were shot, one died, and two of the others were, at last report, in critical condition.

The good news is that Mom will be moving into a senior assistance facility very soon. The logistics will be a huge deal, but there’s enough family members to make it happen as smoothly as possible. If any problems should arise, they will be sorted out in the fullness of time.

Thinking about how my old neighborhood - the one from which I wrote all those letters to comic books and all those fanzine articles - has changed will certainly add a sobering note to my book. That change for the worse shows what happens when a city like Cleveland ignores its residential neighborhoods to build up the playgrounds of the wealthy and the powerful. I’ll have more to say on this when I launch my presidential campaign later this year. There may even be buttons and bumper stickers.

My health has been a wee bit shaky in recent months, which is not unexpected in a man of my advanced years who spends a huge portion of his waking hours at a keyboard. I’m making and going to medical appointments with the hope of insuring I’ll be around for a great many more years and books and conventions to come.

Looking ahead to the rest of this year, I’m currently finalizing my schedule of convention and other public appearances while planning the resumption of my garage sales in August. If the fates are kind, my online sales will return next month. Look for more news on all these things early next week.

In the meantime, come back here tomorrow for another hard-riding, rip-roaring installment of Rawhide Kid Wednesday. I reckon that’s the right thing to do...unless you’re just some kind of no account owlhoot.