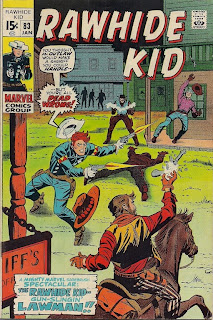 The Rawhide Kid is my favorite western comics character and one of my favorite comics characters period.  Something about the short of stature (but big on courage and fighting skills) Johnny Clay spoke to the short of stature (but big on comics-reading skills) teenage Tony Isabella.  After rereading the Kid’s earliest adventures when Marvel Comics reprinted them in a pair of Marvel Masterworks and an Essential Rawhide Kid volume, I wanted to reacquire every Rawhide Kid comic, reread them and write about them in this bloggy thing of mine. This is the 68th installment in that series.
The Rawhide Kid #83 [January 1971] could have been billed as “the story you demanded!” Because, as the cover by Larry Lieber and John Tartaglione shows, after countless reader requests, the Kid becomes a lawman!

“The Rawhide Kid, Lawman” (20 pages; but pages 12 and 13 are half-pages) was written and penciled by Lieber and inked by Tartaglione. In the lawless town of Deadrock, the Kid is making a quick stop to pick up supplies. He knows a town like this spells trouble that he can live without.

When reckless trail hands ride into town and almost run over a boy and his dog, Rawhide rescues the boy and then confronts the galloping lunkheads. They draw down on the Kid and he disarms four men with three shots. Because he’s that good and because there wasn’t room for a fourth sound effect.

The townspeople recognize the Rawhide Kid, but the mayor says that he doesn’t care if the Kid was Jack the Ripper. He thanks Rawhide for standing up to the cowpokes. Another citizen asks the Kid if he would consider hiring on as the town’s sheriff. No one but Rawhide is concerned the Kid is an outlaw with a price on his head.

CITIZEN: This could be a way to square yourself with the law!

CITIZEN: Besides, there’s no warrant out on yuh in this county! Yuh kin settle down here and still do what you do best...gunslingin’! Only now it’ll be to keep law and order!

The Kid accepts the job. The townspeople are thrilled they have “a first-rate peace officer who’ll make it safe for decent folks to walk the streets!"

The Kid vows to do his best and wonders if this marks the beginning to a new life for him:

What an ironic twist of fate! After all these years of dodging tin stars, I end up wearing one!

But maybe this badge will buy me the decent, respectable life that I’ve hankered after for so long! Maybe my days as a fugitive are ended forever!

The lawman job suits the Rawhide Kid. Within three pages, the Kid has become a popular figure in the town:

For the first time in years...folks are smilin’ at me...instead of eyeing me suspiciously and fearfully! It sure feels great!

The story cuts to Luke Clanton, who’s about to complete a five-year sentence for armed robbery. It was the Rawhide Kid who caught Luke and brought him to justice...and it’s revenge against the Kid that has obsessed Clanton all those years.

Normally, a Luke Clanton, even with a gang out of owlhoots, would not be much of a problem for the Rawhide Kid. But, as that bastard fate would have it, Nightwind, our hero’s horse, gets a roof caught in a gopher hole. The Kid does a header into the hard ground. When he comes to, his vision is blurred and he can hardly see anything.

The town doctor says Rawhide’s eyes are undamaged. His vision will return to normal in a few days. The Mayor tells the Kid he can stay with him and the missus while he heals.

Meanwhile, Clanton finds out the Kid is the lawman of Deadrock and heads there with his gang. The outlaws terrorize the townspeople. If the people don’t hand over the Kid within the hour, Clanton and his goons will level the entire town.

The Mayor says they can’t turn the Kid over to Clanton because the outlaws will kill our blinded hero. The townspeople says it’s the Kid or the town. Rawhide begs to differ:

Your only chance is to stand up to these gunmen! You can do it! You far outnumber them. I can’t see, but I can draw upon my own experience to tell you how to fight them! Together, we can win!
The townspeople don’t share Rawhide’s confidence. They give him to Clanton. But Luke doesn’t think his revenge will be complete if the Kid doesn’t know who he is...and the Kid doesn’t remember someone who was just one of the guns he’s tangled with all over the west. Clanton decides to take the Kid with them. He’ll hold him prisoner until Rawhide’s sight returns and then kill him.

Blurry of vision or not, Rawhide isn’t going to go out that easy. He attempts to escape, knocking over one outlaw only to be tripped by another. Fortunately, the fall restores the Kid’s sight. So he grabs a gun from one of his captors and, clearly not feeling very kindly, kills every last one of them.

The Kid reflects on the carnage: His name was Luke Clanton...and his thirst for vengeance is quenched at last! The ironic thing is that I don’t even remember him! He’s just another forgotten face from the turbulent past!

That soliloquy reveals so much about the life the Rawhide Kid has led that the reader can actually feel the young man’s pain.

Deadrock is jubilant over the Kid’s return and his taking out the Clanton gang. Until Rawhide tosses his badge to the ground:

I’ll defend folks who are worth defendin’...but not you!

The measure of a town is how it weathers a crisis! Some towns stand tall and proud when the goin’ gets rough! But, when trouble came to Deadrock, you folks looked the other way...and left a blind sheriff to the tender mercies of armed killers!

And so, I’ll just be pushin’ on! There’s nothing here for me any more! Nothing but a shattered dream...in a town of shame.

Like so much of Lieber’s excellent work on this title, “The Rawhide Kid, Lawman” has never been reprinted in the United States.

The rest of the page is a Marvelmania advertisement for “104 Marvel Art Masterpieces” from Marvelmania. The pictures are said to be of “favorite super-heroes, villains, best covers, comic art pages” and come in a variety of sizes from 2.5" x 4" to 8.5" x 11". The cost for the set, including postage and handling, was $2.

I never ordered or saw these items. If you bought them back in the day or acquired them since, I’d love to hear all about them. Send some scans if you can and I’ll share them with your fellow bloggy thing readers.

On the classified ad pages, the pitch for “100 stick-on stamps of the scariest Movie Monsters” is gone, but the usual comics dealers were still on hand: Howard Rogofsky, Passaic Book Center, Robert Bell, Grand Book Inc. and Clint’s Books. One dollar would still get you a sample copy of The Comiccollector fanzine.

The Marvel Bullpen Bulletins page is back this month. The lead item tells of a visit to the Bullpen by Marvelmania’s Mark Evanier and Steve Sherman. I’ve clearly confused my time line on this because I thought Mark and Steve (and myself) were all long gone from that organization by then.

Other items include impressionist Will Jordan entertaining at the first open meeting if the Academy of Comic Book Arts; Sol Brodsky leaving Marvel to start his own comics company (Skywald, though it wasn’t mentioned by name); John Verpoorten being promoted to Marvel production manager; Joe Sinnott returning to Fantastic Four as the title’s inker; Roy Thomas and then-wife Jeanie going to Rutland for the Vermont city’s annual Halloween parade; kudos for Marvel’s new Conan comic series from Harlan Ellison, Don and Maggie Thompson, Dick Lupoff, Glenn Lord, Ted White and August Derleth; and Bullpen welcomes to then-young artists Berni Wrightson and Rich Buckler. The last item reported Buckler working on a new strip by the name of Man-Wolf. Anyone know anything about that never-published strip?

In “Stan Lee’s Soapbox,” the Man talks about Marvel trying to stick to its every-story-complete-in-one-issue policy and not being very comfortable with it. The fans are asked for their thoughts.

The bottom of the Bullpen page has a small ad for Marvel Tales #29 and Daredevil Annual #2. The former has a new cover by Sal Buscema with inks by either Buscema or Verpoorten. It reprints Amazing Spider-Man #39 and #40 by Stan Lee, John Romita and Mike Esposito along with a Doctor Strange adventure by Steve Ditko and Stan Lee from Strange Tales #141.

This issue also features a full-page ad for Kid Colt Outlaw #151 with a new cover by Trimpe. Inside are three Kid Colt reprints from 1958 by Stan Lee, Jack Keller and Christopher Rule; Keller and an unidentified writer; and Lee and Joe Maneely. A fourth, non-series story is by artist George Woodbridge and an as-yet-unidentified writer.

The issue’s finale is its “Ridin’ the Trail with Rawhide” letters page. Rozina Jaworski of Jamaica Plains, Massachusetts wants to see the return of the Lynx from issue #76 and suggests the villainess go after the Kid with all-woman band of outlaws.

Roland Rangno (no address given) is a big fan of the “Tales of Fort Rango” series in Western Gunfighters. He suggests:

Why not have a cavalry attack squad like Sgt. Fury and the Howlers except in the eighteen hundreds? You could have Major Brett Sabre as the commanding officer and some of the men of the fort as his detail. They could be telegraphed from Washington to do special assignments such as chasing border bandits, breaking up a spy-ring which consists of deserters and stopping Indian raids on small villages. Also, once in a while, you could have them defending a small outpost. How are these for ideas?

Finally, Diane Nagura of San Francisco believes “it’s time for the fairer sex to be heard from in Western comics” and adds:

Rawhide Kid has the cool combination of action, suspense and a little romance which every girl needs.

That’s a wrap for this week’s “Rawhide Kid Wednesday” feature. I’ll be back tomorrow with a new “Television Thursday” column.

Posted by Tony Isabella at 6:29 AM