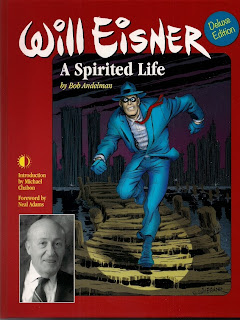 The true Golden Age of Comics is right now. It’s a time when fans can read many of the great and not-so-great comic books of decades past in print or electronic form. It’s a time when great new comic books and graphic novels are being created in every genre you can imagine and from all around the world. It’s a time when dedicated comics historians are working tirelessly to discover and preserve the history of the art form and its creators.

TwoMorrows Publishing of Raleigh, North Carolina is a treasure in this most golden of comics ages. The company publishes some of the best magazines of comics history - Alter Ego, Back Issue, The Jack Kirby Collector - and the informative Draw! (The Professional “How-To” Magazine on Comics, Cartooning and Animation). The publisher’s catalog include books on comics history and comics creators. In a competitive field, TwoMorrows more than holds its own with all of the other publishers doing such great work in this area.

Andelman spent three years interviewing Eisner for the first book.This edition adds hundreds of black-and-white and full-cover images to that work. There are new interviews with Drew Friedman, Howard Chaykin, Darwyn Cooke, Sergio Aragones, Michael Uslan and others, interviews “which clear the air on topics left unfinished by the first edition and add depth to the reader’s knowledge of Eisner’s body of work. There’s an introduction by Michael Chabon, followed by a foreword by Neal Adams.

What truly makes this expanded edition, just as it made the first edition, is Andelman’s quest to present a complete picture of Will Eisner, his works, his business savvy, his creative genius, and all the other elements and factors that made up the life of one of the greatest comics men of all time. I’m a little over a hundred pages into the book, savoring every chapter and interview, but I didn’t want to wait to recommend it to you. If you’re interested in comics history, if you’re a fan of Eisner’s work, this is a book you must add to your personal comics library.

I don’t know if an expanded edition of an existing work will still be eligible for next year’s comics industry awards, but, if it is, Will Eisner: A Spirited Life will get my votes. Why did it have to come out in the same year as the first in my series of kind of sort of memoirs? I knew I saw Joe Btfsplk hanging around my neighborhood last week!

Keep reading the bloggy thing for the latest on my kind of sort of memoir. Buy Andelman’s book today.

Modern Masters Volume 30: Paolo Rivera [$15.95] is a recent entry in the long-running TwoMorrows series of books focusing on some of the best and brightest artists working in comics today. Each book in the series offers a lengthy interview with its subject covering their background, career, inspirations and working methods, as well as enough examples of their work to fill an art gallery.

Rivera grew up in an art store. He paints, he pencils, he inks, he colors and he sculpts. Though I’m a story guy first and foremost, I was fascinated by how he goes about creating his amazing single images and his comic-book pages. It’s illuminating to see how much thought he puts into his work.

Eric Nolen-Weathington has written dozens of books like this one. He is one of the best interviewers in comicdom and his skills makes each of these books a keeper. You’ll not go wrong buying this book or any of the other volumes in the series.

Alter Ego is my favorite magazine about comics and Back Issue, its companion magazine, is high on the list as well. The May issues of these titles were a crossover celebrating 75 years of Green Lantern and the Flash.

Alter Ego focuses on the Golden and Silver ages of comics. Issue #132 [$8.95] kicks off with Kurt Mitchell’s entertaining and informative article on Flash, Green Lantern and a third super-star of the Golden and Silver Age, Hawkman. Those familiar with my own comics writing will recall I’m somewhat fond of the Winged Wonder. That’s followed by a remembrance of artist Arthur Peddy and a few more fragments of the missing Justice Society of America story that Alter Ego has been restoring bit by bit.

Michael T. Gilbert concludes his two-part article on Bob Powell’s The Man in Black Called Fate, piecing together the details on that character’s own lost issue. The issue also features an interview with Al Dellinges (the ultimate Joe Kubert fan), a memoriam for the great Al Feldstein of EC and MAD renown and a few pieces on Captain Marvel and other Fawcett Comics characters.

In Back Issue #80 [$8.95], comics historian John Wells picks up the adventures of the Flash and Green Lantern in the Bronze Age. There are several other articles on the two heroes, including one by Mark Waid and another by Paul Kupperberg. Closing out the issue is one final stroll though the various New York offices of DC Comics, now located in the Los Angeles area. I definitely don’t share any dewy nostalgia for DC or its offices - I generally refer to my time as a DC staffer as my “six months in Hell” - but most fans will enjoy the remembrances.

Alter Ego and Back Issue are must-reads for any fan or professional interested in the history of comics. Even as I strive to reduce my Vast Accumulation of Stuff, I know my runs of these magazines will have to be pried from my cold, dead hands.

The five artists named on the cover of Draw! #30 [8.95] read like a wish list of artists any writer would be thrilled to work with: Chris Samnee, Butch Guice, regular columnist Jerry Ordway, editor-in-chief Mike Manley and Bret Blevins. The magazine’s audience is aspiring artists, but, as with the Modern Masters series, a writer can learn a lot from this publication about working with artists.

Leading off the issue, managing editor and designer Eric Nolen-Weathington interviews Samnee on cartooning in a field increasingly driven by photo-realism. Ordway writes about taking an image from your mind-s eye to the finished page. Manley interviews Guice about his latest work. Blevins and Manley offer a “Comic Art Bootcamp” on the drawing of the human ear. Columnist Jamar Nichols reviews the tools of the trade.

Draw! might not interest the casual student of comics. However, if you’re an artist or a writer looking to understand the artists he will be working with, it’s a valuable magazine.

The Jack Kirby Collector #64 [$10.95] is a “Kirby at War” issue and the most intense exploration of the artist’s life as a soldier and the comics which drew on those experiences I’ve ever seen. From the opening feature - a comics story visualization by Jean Depelley and artist Tom Scioli based on the often brutal combat Kirby saw during World War II - to interviews with people who knew Jack or some of his fellow soldiers to rare World War II art by Kirby to overviews of Kirby’s war comics, this issue is sometimes shocking, sometimes terrifying and always interesting. The best Kirby scholarship puts its emphasis on his incredible work and a life that mirrors so much of the American experience. That’s what this fantastic issue of The Jack Kirby Collector does and why I give it my recommendation.

That’s all for today. I’ll be back here tomorrow with another rip-roaring installment of our “Rawhide Kid Wednesday” series.

Posted by Tony Isabella at 6:46 AM