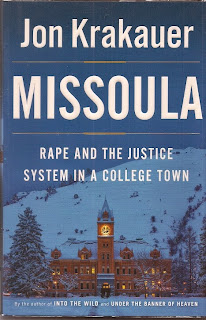 Greetings, my beloved bloggy thing readers. I’ve been working on my kind of sort of memoir while trying to get through nearly a week of feeling like something any decent cat would refuse to drag in. I could only sit at my keyboard for an hour or two and then I would have to take a break for an hour.

This wasn’t great for my memoir or anything else I was writing, but did allow me to read some books and watch some TV. You’ll be seeing bloggy things on many of these books and shows when I take breaks  from working on the memoir. You think a self-indulgent blogger like me would have learned long ago that writing about oneself can be tiring.

Last night, I finished Missoula: Rape and the Justice System in a College Town by Jon Krakauer [Doubleday; $28.95]. This non-fiction account of non-stranger rapes in a typical college town in Montana is frightening, all the more so because it is a true account of how athlete hero worship, indifferent prosecutors, inadequately trained detectives and utter denial of the obvious allowed serial predators to escape punishment for their crimes and condemned their victims to abuse, anxieties and terrors, day and night, which they’ll live with their entire lives.

Halfway through reading Missoula, I was consumed with rage at this ongoing situation in that town and across our nation. At one point, the Department of Justice investigated 350 sexual assaults reported to the police in the town over a period of four-and-a-half years. Prosecutors, especially the despicable Kirsten Pabst, would fail to pursue any case that wasn’t a slam dunk, denying victims the chance to see their rapists face trial. Pabst even went so far as to take the side of an “alleged” rapist by defending him as his university hearing. The “alleged” rapist got off scot-free. Pabst then became a defense attorney, defending other “alleged” rapists. Amazingly, she is now the county attorney, elected because football fans were ever so grateful that her efforts returned one of their heroes to the playing field. I threw up a little in my mouth at that point, as I did when her predecessor refused to cooperate with the DOJ in its investigations because Obama and freedom. The thought of living in an area where someone like Pabst wields such discretionary power is horrifying.

Missoula is a must-read for anyone who seeks to understand the rape culture of too many U.S. universities. It will not be an easy book to read. What got me through it was thinking of my own daughter and her friends. They and all our daughters deserve a safer world and, failing that, serious justice when their rapists are identified and put on trial.

Posted by Tony Isabella at 1:49 PM