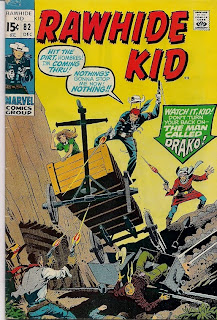 The Rawhide Kid is my favorite western comics character and one of my favorite comics characters period.  Something about the short of stature (but big on courage and fighting skills) Johnny Clay spoke to the short of stature (but big on comics-reading skills) teenage Tony Isabella.  After rereading the Kid’s earliest adventures when Marvel Comics reprinted them in a pair of Marvel Masterworks and an Essential Rawhide Kid volume, I wanted to reacquire every Rawhide Kid comic, reread them and write about them in this bloggy thing of mine. This is the 67th installment in that series.
The Rawhide Kid #82 [December 1970] has a new cover by Herb Trimpe, but, inside this issue, we get a reprint of “A Man Called Drako” (17 pages) by writer Denny O’Neil with art by Dick Ayers and Vince Colletta. The story originally appeared in Rawhide Kid #59 [August 1967]. Even back in 1970, I thought it was way too soon for Marvel to reprint a story barely three years old. Makes me wonder if the issue was running late and the editorial/production staff grabbed the first set of photostats they could lay their hands on. Anyone know for sure?

I want to spend a bit more time on that Trimpe cover, which I like a lot. It’s an exciting image with lots going on. There’s plenty of room for the Kid’s two word balloons and the arrow-caption warning him about Drako. The bright yellow background makes the cover pop. It’s a swell cover on all fronts.

“A Man Called Drako” isn’t identified as a reprint, a practice that Marvel would eventually abandon. You can read my comments on this story by going to my bloggy thing for June 19, 2013.

The issue’s second story is also an unidentified-as-such reprint. “The Badlands” (4 pages) was first published in Kid Colt Outlaw #80 [September 1958]. Drawn by Ayers, this is a clever little tale of an aging sheriff who rides alone into the badlands on the trail of a killer named Brad Gower. The story is narrated by a ballad-singing cowboy. I admire the unidentified writer who actually made that difficult device work.

No one from the town of Chemung will accompany Sheriff Frank Carter on this manhunt. Dozens of outlaws are hiding out in those badlands and the townsmen don’t have the stones to risk their lives bringing Gower to justice.

The outlaws laugh at Carter when he tries to enter their badlands after Gower. They taunt Carter and fire their rifles into the air. They think they spooked the sheriff’s horse, but it was all part of the lawman’s plan. He has tricked them into revealing exactly where they are.

Carter pulls the main log from a damned-up river. Nature does its part, flooding the outlaw hideout. Their guns and ammo soaked and useless, the outlaws surrender to the sheriff.

Carter herds up the outlaws and marches them into Chemung, much to the amazement of the townsfolk. The angry Gower demands the ballad-singer include him in the song.

SINGER: And to think the end of Brad Gower was brought by Frank’s man-made shower!

The rest of the page is a Marvelmania advertisement for 6-inch tall “molded and unbreakable 3-D statues of your favorite super-heroes, each with its own base [and] no assembly required.” There are two sets of three heroes each. Set A has Spider-Man, Hulk and Iron Man. Set B has Captain America, Thor and Daredevil. Including postage, each set costs $2. Order both sets and the cost is $3. This statue pitch suggests you “paint ‘em or just set ‘em around to form your own super-hero museum!”

Marvelmania had a deservedly shady reputation. By this time in its existence, I wasn’t buying anything from the fan club. So, having never seen these models back then, I ask if any of my bloggy thing readers did order and receive them. I’d be interested in learning what you thought of these mini-statues.

Various back-issue dealers bought space on this issue’s classified ads pages: Howard Rogofsky, Passaic Book Center, Robert Bell, Grand Book Inc. and Clint’s Books. A sample copy of The Comiccollector could be yours for a dollar. If you still had another dollar left after buying all those Marvel comics, you could get “100 stick-on stamps of the scariest Movie Monsters!”

There was no “Marvel Bullpen Bulletins” page this issue, but we did get a “Ridin’ the Trail with Rawhide” letters page...and it’s just now occurred to be that “Riding’ the Range with Rawhide” would’ve been a better name for the column. Am I slow or what?

Reader Jackie Brannan of Memphis, Tennessee is having a hard time tracking down issues of Ringo Kid and has never read a Ghost Rider story. He or she would also like to see Rawhide team with Ghostie, Kid Colt and the Two-Gun Kid. Brannan also caught a goof, spotting that a character drew his gun with his left hand, but it was the man’s right holster that was empty.

Would you believe it was a fancy cross-draw, Jackie? How ‘bout if we tell you it was a good? That’s what it really was, most likely. About our splendiferous spook of the plains, the galivanting Ghost Rider, you’ll find him, along with some pretty rough hombres in Western Gunfighters.
Mike Francis of Manhattan beach, California, who was published in Rawhide Kid #74, suggested in that earlier letter that the Rawhide Kid should meet some modern-day villains like Doctor Doom. At that time, Marvel said that decision would be made by readers. Francis asks how that worked out and Marvel answers with an evasive “still waiting for comments on your suggestion.”

Michael Nesmith of Hopewell, Virginia wants to know how the Rawhide Kid and Kid Colt became outlaws. He also wants a gunfight between Rawhide and the Ringo Kid.

That’s it for this issue. Look for another “Rawhide Kid Wednesday” next week.

I’ll be back tomorrow with other stuff.