DANCING WITH THE SQUIRRELS 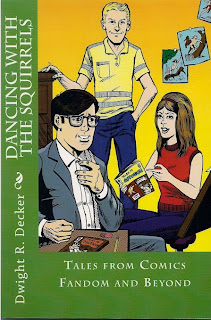 When I finish writing my "memoir" later this summer and go into hiding at some secluded cabin with my stack of books I really want to read, this one will be at the top of the pile.

Dancing with the Squirrels: Tales from Comics Fandom and Beyond is a collection of stories by my dear old friend Dwight Decker [CreateSpace; $14.95]. We met through the fanzines when we were mere teenagers and have been friends for closing in on half a century. Dwight has written all sorts of interesting stuff over the years, but I have a special love for his tales of comics and science-fiction fans. I always hoped he would publish a collection like this and now he has.

Here's the Amazon pitch for the book:

Long before any theories about oversized detonations… there were funny stories about comic book fans! A long time ago, a certain aspiring author realized that he didn’t know much about what real-life detectives, spies, cowboys, or starship captains actually do, so it would be hard to write stories about them. But what he did know was what kind of trouble his fellow comic-book fans got into. So, taking the old advice to new writers, “Write what you know,” a little too much to heart, he instead wrote real fan fiction — stories about fans. This book collects some of his best, new and old, all as fresh and funny as when they were first written. In the title story, destiny strikes like lightning at a comics convention — but its aim is a little off. In the other stories, teenage comics fans hunt for rare and valuable old comic books in unlikely places while trying to live down the damage done to their reputations by the Batman TV show. The fictional locales range from a small town in Illinois to Los Angeles and even England, but the strangest story of all is set in Cincinnati — and happens to be perfectly true! Whether you’re a comics fan or a science-fiction fan, know some fans, or just have some idea of what comic books and science fiction are, Dancing with the Squirrels will introduce you to a world you may have never known existed. The fanboys — and even a fangirl or two — are on the move!

Even unread, I recommend this book to you...based on how much I enjoyed the writing of a somewhat younger Dwight Decker. I have to wait a few months to read it, but you don't.

Posted by Tony Isabella at 8:21 PM