WHAT I DID THIS WEEKEND 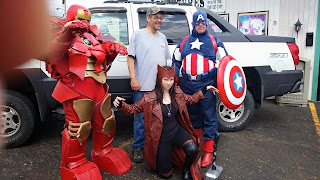 Owner Curt Griffin and his staff are first-rate. Despite the store being packed with customers - Free Comic Book Day tends to do that to a shop - I watched them help countless customers find comics and other cool stuff. I have to give a special shout out to the woman I’ll always think of as “Little Helper Loni,’ a diminutive dynamo of charm and smiles.

There were some amazing cosplayers on hand for the celebration of comicdom’s holiday. Captain America looked like he could have won World War II by himself. Iron Man was huge and imposing. Hawkeye and the Scarlet Witch looked great. There were two fans dressed as Black Widow, one of my favorite Avengers.

The store’s other guest was artist Dan Gorman, who I know from too many conventions to count. Dan does medical illustrations, comics, sketch cards, commissions, t-shirts and more. I bought one of his prints a while back and love it a lot. We had a great time chatting at Heroic Adventures and - fingers crossed - we might be working on something together in the near future.

I had a wonderful time at Heroic Adventures and, if you live in the area or are just passing through the area, I highly recommended you  pay the store a visit. On Free Comic Book Day and every day, great comic-book shops are a national treasure.

Some conversations I had with people at Heroic Adventures have now reached the level of frequent conversations.  I want to talk about them for a bit.

The first is when someone doesn’t know who I am or what I’ve done. Sometimes they are embarrassed about that and they really shouldn’t be. There have been thousands of - maybe tens of thousands - comics creators in the comic-book industry. The days when one could know  most active professionals are long since past.

My healthy ego notwithstanding, it doesn’t bother me when someone doesn’t know who I am. In fact, I’ve gotten a kick out of this on occasion. Recently, in a convention artist alley, an artist seated across from me had no idea who I was. He was curious about all the people who seemed really excited to see me. He mentioned this to a few friends at a comics-grading service and they gave him a bit of a (joking) hard time over not knowing me. When he told me about it, I chuckled.

I take no offense when someone comes up to my table and asks who I am. I take pride in the work I’ve done and do. I’m always happy to  talk to someone about it. Maybe I get a new reader. Maybe I don’t. But I do like to think I’ve added, if only a little, to the fan’s  enjoyment of the convention.

Except when I’m making with the jokes, I don’t consider myself to be a “legend” in the comics industry. However, with increasing and alarming frequency, I’m being called a “comics legend.” One of my friends thinks it’s all about survival. If you manage to live long enough, you automatically become a “legend.”

If you must call me a “legend,” add the adjective “living” to that. I find that reassurance comforting.

This one does bug me a little. It’s when people assume I’m retired. The basis for this assumption seems to be that I’m not writing for Marvel or for those evil bastards at DC Comics. With the right gig, I would love to write for Marvel again because I think the company is publishing some very entertaining comic books and treating even old guys like me with respect. But there’s so much more to my life than those two outfits.

My current workload includes writing a 60,000-word memoir, writing plots for a comic strip client, writing the weekly “Tony’s Tips” column for Tales of Wonder, preparing movie pitches at the request of a studio, writing this nigh-daily bloggy thing, preparing a new weekly comics feature and looking wistfully at the 200-plus items on my growing bucket list of things I want to write before I kick the bucket. Does that sound like “retirement” to you?

That said, I could use a nap every now and then.

What else did I do this weekend?

I wrote my “Tony’s Tips” column for May 11, scanned covers for the column and e-mailed the whole shooting match to Tales of Wonder. I signed the contract for my new book and mailed it to the publisher. I figured out my production schedule for the new book. I collected my winnings - around $50 - from son Eddie having placing a bet for me at the Kentucky Derby. I watched recorded episodes of Backstrom and iZombie. Finally, when Eddie got home from Kentucky, we went to see Avengers: Age of Ultron with daughter Kelly and our neighbors Giselle and Greg.

What did I think of Avengers: Age of Ultron? A film that incredible deserves a bloggy thing all to itself. I’ll be back tomorrow with that bloggy thing. See you then.

Posted by Tony Isabella at 5:56 AM