AN AUDIENCE OF ONE 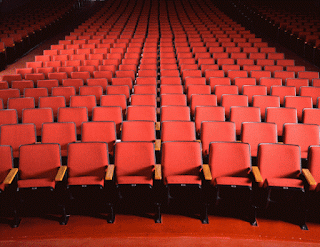 So what if I gave a library talk and no one came? To be fair, it’s not as if no one was in the room when I gave a talk at a library in one of Cleveland’s eastern suburbs. My Sainted Wife Barb was there. The library employee who had arranged the talk was there. A trio of young women came into the room about ten minutes into the talk and left about ten minutes later. One older woman stayed for the entire talk and said she enjoyed it. But that was it.

These things happen. Okay, not to a Stan Lee or a Tom Batiuk or a Katy Perry, but, to people on my level of “celebrity,” they happen. It’s usually not something for which blame can be attributed to any one thing. Maybe the weather kept people inside their homes or out doing fun stuff. Maybe the promotional efforts didn’t reach people who would have been interested. Maybe I should have changed my name to Ryan Reynolds.

Whatever the reason for the ego-shattering attendance, I was going to give my talk. Which I think was a pretty good talk. I spoke on the history of comics for well over an hour with a slide show of my comics in the background. I gave a pretty good abridged lecture on the subject. I answered the enthusiastic questions of the one person in the audience who wasn’t Barb or me or the library employee. The show must go on.

After leaving the library, Barb and I drove home. During the drive, we talked about the talk. One of these days, I think I’ll write out a script for a filmed version of this talk. I would find a better narrator for the talk - maybe Katy would be interested - and expand the images beyond my own work. Maybe I’ll launch a Kickstarter or another crowd-funding campaign to finance the project. I’m mulling that over even as we speak.

My ego recovered quickly from this library appearance. But it might be a while before I agree to do another such talk.

As for Katy Perry, I have no idea if she gives library talks. But, if she did one around here, I would go to it. I suspect she might draw a somewhat larger audience than I did.

My family and I are living in those proverbial interesting times. While dealing with some employment and family matters, we are also dealing with the incredible good turns my career has been taking in recent months. Because of the demands all the above have placed on me, I canceled all of my remaining convention appearances save for two of my favorite shows:

I’ll have more on those events as we get a little closer to them. Needless to say, I’m looking forward to them and hoping to see some of my bloggy thing readers and Facebook friends there.

Tomorrow’s bloggy thing will have another convention report. That will be followed by a new “Citizen Tony” column and four columns on comic books of the past. I’m also working on a piece on annoyingly bad and rude behavior at some of the conventions I’ve attended this year. I’ll post that one when I’m comfortable with it.

Thanks for stopping by today. I’ll see you tomorrow.

Posted by Tony Isabella at 6:23 AM