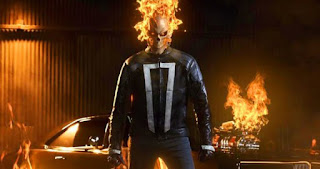 Most of what I watch on TV these days comes from comic books: Agents of S.H.I.E.L.D., Arrow, Daredevil, Gotham, Guardians of the Galaxy, iZombie, Jessica Jones, Legends of Tomorrow, Lucifer, Preacher, Supergirl, The Flash, Ultimate Spider-Man and whatever the current season of the Avengers cartoon is called. I should also mention the coming Luke Cage. I think the only comic-book TV I’m not watching is The Walking Dead (because I want to get caught up on the comic books first) and the reality show Kevin Smith is on. That’s a lot of television.

In celebration of fans like me who watch too much damn television, here are a few quick thoughts on some of the above shows. If there are major spoilers, I’ll warn you beforehand.

I was intrigued by the season premiere of Agents of SHIELD. As has become usual for this series, the events of the last Marvel movie weigh heavily on the agents. SHIELD has a new director and, though he’s not in this premiere, I don’t like or trust him. The Sokovia Accords limit the super-powered help the agents can call on. Daisy is still hunting the Watchdogs and the various criminals who work for them...and she’s being hunted by the government. The members of the core team from last season are scattered throughout the agency. And then there’s the Ghost Rider.

The Ghost Rider is the Robbie Reyes version of the character. He’s the most intriguing part of the show. He strikes me as more violent and lethally vengeful than his comic-book counterpart, but he’s got my attention.

The reader/viewer in me who wants to see heroes both triumphant and happy hopes the core team gets back together. If that happens, it probably won’t happen until near the end of the season. However, based on this first episode, I’m in for the long ride.

Ultimate Spider-Man has been playing in the Spider-Verse with Miles Morales becoming something of a sidekick to our Spider-Man. The episodes have been entertaining with Spider-Gwen showing up in the season finale. Though the show is aimed at younger fans, it doesn’t dumb down the alternate universes stuff or the pseudo-science. I get a kick out of it.

Marvel's Avengers Assemble has a similar feel. This season, we’ve seen Ultron, the Inhumans, Ms. Marvel and the Vision with Captain Marvel and the Black Panther due to appear in the finale I haven’t watched yet. It’s an entertaining series.

The first season of Jessica Jones told a gripping story of a hero with PTSD and a villain who was as terrifying as any I have seen on the big or small screen. The introduction of Luke Cage was played just right. The brief appearance of Claire Temple from Daredevil likewise. That said, I had three problems with the show.

The first was its pacing. It took thirteen episodes to tell a story that wasn’t a thirteen-episode story. To stretch out over so many episodes, it had to...

...fall back on having smart people do really stupid things. When Jeryn Hogarth freed Kilgrave so that he could force her spouse to drop her divorce demands, my son Eddie gave up on the series. Being older and wiser (or, at least, having read and watched a lot more stories than him), I merely rolled my eyes painfully.

The third problem is more a problem with me than the show itself. I am bone-tired of heroes who fail to make the moral choice to end a threat that can’t otherwise be contained. I don’t see the whole “heroes don’t kill” thing as being absolute because sometimes that is the only moral choice. Nothing short of killing Kilgrave could have ended the clear and present danger he presented to Jessica and  all others. He was a sociopath who reveled in death. He needed to be put down.

I never bought that a Kilgrave confession was the only way to get justice for the imprisoned Hope Shlottman. With Kilgrave dead, any number of witness could have testified to the villain’s power over them. In a world that has seen Avengers and Asgardians, Hope could have gained her freedom in a court of law.

Those problems aside, I have nothing but love for the performances of Krysten Ritter (Jessica Jones), Rachael Taylor (Patsy Walker), Mike Colton (Luke Cage), David Tennant (Kilgrave) and the rest of the cast. They were magnificent.

Technically, Better Late Than Never is not a comic-book show. What it was: the four-episode story of Henry Winkler, William Shatner, George Foreman and Terry Bradshaw traveling through Asia. What it was: delightful, funny, informative. I hope the show is released on DVD with lots of extras. I hope the series will return for another travel adventure with these gentlemen.

Eddie and I have watched the first four episodes of Daredevil Season Two on Netflix. I assume these episodes were the first Punisher story arc and that Frank Castle will be back before the end of the season. Elektra has shown up as well.

I’m loving this season as much and maybe even more than I loved the first season. I’m a little put off by the Punisher’s use of deathly torture, but that’s hardly out of line with how he’s been portrayed in various comics in recent years. Elektra seems a little off to me as well. But, as I said, I’m loving this season. If Eddie and I can manage to be free at the same time, we’ll likely binge-watch the rest of the episodes.

Gotham kicked off its third season and, with that season opener, I have developed a theory:

Gotham takes place in a world that will never have a Batman. There will be no Dark Knight to keep the monsters at bay. That task will fall to flawed heroes like Jim Gordon, Harvey Bullock, Selina Kyle, Bruce Wayne and others. They will all have to make tough decisions. Gotham may never run out of monsters.

That makes Gotham a pretty gloomy show. What keeps me watching is the great acting and writing. This isn’t my Batman. It is a series that intrigues and entertains me.

Lucifer kicked off its second season. There’s so much going on in just the first episode that I need to warn you...

Despite the fact this his mother has escaped from Hell and might be up to enormous no good, Lucifer really has his shit together by the end of the second season premiere. His relationship with Detective Chloe Decker now makes sense for both of them. He and his brother Amenadiel are mending their relationship. Demon Maze is redefining her relationship with Lucifer. Even Dr. Linda Martin, his shrink, is finally getting through to him. I’d like to see Lucifer keep his shit together because this improved state of mind hasn’t lessened his sarcasm or swagger one whit. I like character growth like this. We don’t see if often enough in TV shows or comic books.

High marks to actors Tom Ellis (Lucifer Morningstar), Lauren German (Chloe Decker), D.B. Woodside (Amenadiel), Lesley-Ann Brandt (Maze) and Rachael Harris (Dr. Linda Martin)...and to the Lucifer writers. Who would have thought that a show about the devil would become a cheerful followup to Gotham?

My daughter Kelly and I binge-watched the last ten episodes of the second season of The Flash over the past week or so. It was quite the ride to the finale. A few missteps, to be sure, but, overall, very satisfying. As for those few missteps, an appearance by King Shark in all his CGI glory plus the spectacle of a metahuman army gathered by Zoom balances the scales. I can’t wait to see what’s in store for season three.

My goal for the next three to four weeks is to stay current on all of the above series while catching up on Arrow, Daredevil, iZombie and Legends of Tomorrow. I love a challenge.

The bloggy thing will be going on hiatus until Monday, October 3. See you then.