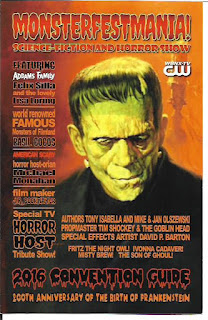 Monsterfestmania was held on Friday night and Saturday, July 29-30, at the Quaker Station in downtown Akron, Ohio. The event organizers were Robert Jenkins, Michael Savene and Jesse Noble, the same fine folks who put on the Akron Comicon. Despite some problems outside the control of the guys, this inaugural event was a great success and a whole lot of fun.

The head liners of the guest list were Felix Silla (Cousin Itt) and Lisa Loring (Wednesday) from The Addams Family. Silla, of course, is also known for playing Twiki on Buck Rogers in the 25th Century and many other roles in movies and on TV.

Silla is among the most friendly celebrity guests I’ve ever seen at a convention. He was energetic and personable, engaging with fans and posing for pictures even when he wasn’t at his table. He seemed to be having a great time and he was a definite assist to the show.

Basil Gogos, the renown painter whose classic works graced so many covers of Famous Monsters of Filmland, was scheduled to appear at Monsterfestmania. Unfortunately - and this was one of the problems I mentioned earlier - his traveling companion was unable to fly due to an eye ailment. I was looking forward to seeing Basil as I had enjoyed talking to him at a convention earlier in the year. We’re hoping he’ll be able to attend the next Monsterfestmania.

Horror host-orian Michael Monahan was on hand to moderate a number of panels. The convention wasn’t shy on horror hosts. Among those  attending were Fritz the Night Owl, Ivonna Cadaver, Misty Brew and the Son of Ghoul.

Authors Mike and Jan Olszewski were guests as well. These friends of mine are experts on Cleveland television in all its often-wild wonderment. Other guests included film maker J.R. Bookwalter, propmaster Tim Shockey, special effects artist David P. Barton, Ted Sikora of Hero Tomorrow and Apama the Undiscovered Animal, artists Jay E. Fife and Dan Gorman and others.

The exhibitors room had an impressive roster and this is even more impressive when you consider this was a first-time event. Fellow convention promoters Cinema Wasteland, Ghoulardifest and Monster Bash were in the house. My friends from WBNX-TV/The CW were there giving out all kinds of great swag. Other exhibitors included Toys That Time Forgot, the Northeastern Ohio chapter of Ghostbusters, Cleveland Memories, artist Robert Kraus of RAK Graphics and the USS LaGrange Star Trek club of which I’m an honorary member. Those are just a few of the fantastic exhibitors at the show. If I hadn’t put myself on a very strict budget, I would have spent much more money than I made at the show by a factor of about a hundred. This was, on my part, an impressive display of will power.

After bringing my boxes of stuff to my table on Friday afternoon, before I set up my display, the next thing I did was go hunting for the Famous Monsters of Filmland 1964 Yearbook. I needed the issue for my “July 1963" feature in which I write about comic books and related items that came to newsstands the same month as Fantastic Four Annual #1. As regular bloggy thing readers know, it was that annual that made me want to write comic books. Unfortunately, though there were lots of other cool monster magazines to be had, none of the vendors had the yearbook I wanted. However, I eventually find it on eBay. But I digress.

Friday’s events included panels on horror hosts, the Jungle Bob’s Animal Show that appears on the Son of Ghoul program and how the Internet has birthed new horror hosts. In the “Shock Theater” room, fans got to view Misty Brew’s Creature Feature, a Fritz the Nite Owl presentation of Plan 9 from Outer Space, and J.R. Bookwalter’s The Dead Next Door.

I spent the evening at my table selling stuff, signing stuff I had written and answering questions. At various times I was assisted by Jesse Noble and his crew of volunteers. I would remiss if I didn’t give a shout-out to the always-ready-to-help Denine. Calling her a treasure is no exaggeration.

Most of the few problems at Monsterfestmania were due to it being held in a terrible venue. The Quaker Station was no great shakes in previous years. Under new management, it’s gotten worse. Example: two years ago, I’d reported a broken lock on the door of the only handicapped stall in the main men’s room. Two years later, it had not been repaired.

In addition, the Quaker Station would not allow food to be brought into the event for the guests and would not allow the food trucks which had filled that void in previous years, There was a terrific restaurant across the parking lot from the Station, but that place had closed. The new management also has an insanely inflated notion of what its rental space is worth. Since both the Akron Comicon and Monsterfestmania will be moving to a better and bigger venue, I’ll be pleased to see the Station devoid of human activity most of the time. Their failure will be on them.

Saturday was a fun-filled day. I chatted with old friends and made some new ones. I talked to two artists who will be creating prints for me. I sold some more stuff, signed some more Isabella-written stuff and answered some more questions. The Saturday panel program kicked off with Mike and Jan Olszewski spoke on “Cleveland TV Memories.” Nobody has better Cleveland TV stories than Mike.

That was followed by a “Ghoulardi Tribute Panel” honoring the late great Ernie Anderson. Michael Monahan hosted the panel. This was my one panel of the weekend. The other panelists were Mike Olszewski and the Son of Ghoul.

I spoke about being a Cleveland kid growing up watching Ghoulardi in the still of the night on a black-and-white TV set. Because my dad had to get up in the wee hours of the morning to get the bread started at the family bakery, I had to keep the sound so low that the only way I could hear Anderson and the movies was by lying on the floor right in front of the set. This is probably why I needed glasses at a young age. Totally worth it.

Ivonna Cadaver hosted an Addams Family Panel featuring Lisa Loring and Felix Silla. A “Tribute to the Son of Ghoul” in celebration of his thirty years on TV followed. Wrapping up the panel program was the Costume and Makeup Contest.

In the Shock Theater room, the day kicked off with “TV Spook Show: The Crypt of Clips!” That was followed by the William Castle Film Tribute with co-hosts Misty Brew and Fritz the Nite Owl. The final presentation was a showing of Destroy All Planets (1968).

I had a great time at Monsterfestmania. In 2017, the convention is merging with the Akron Comicon. The two-shows-for-the-price-of-one event will be held October 28 and 29 at the spiffy John S. Knight Convention Center. I’m looking forward to it.

That’s all for today. Come back tomorrow for a report on my latest library talk, sad reflections on bad behavior at some recent conventions I attended and information on the two 2016 conventions remaining on my schedule. See you then.

Posted by Tony Isabella at 9:06 AM