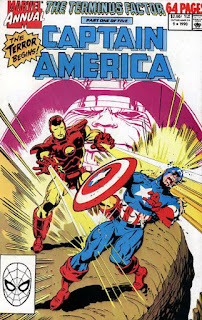 Previously in Tony Isabella's Bloggy Thing...
I’m working my way through Marvel Firsts: The 1990s Omnibus - all 1288 pages of it - a story at a time. I was not a big fan of Marvel during the 1990s, but I figured it was time to take another look at the characters and comics launched in what has been called “comics' most divisive decade.”

Only one story from Captain America Annual #9 [1990] is reprinted in the 1990s omnibus: a 10-page Nomad tale by writer Fabian Nicieza with artists Don Hudson (pencils) and Tom Morgan (inks). “Walking the Line” set the stage for the Nomad limited series which would, in turn, be followed by an ongoing series. The woefully inadequate Grand Comics Database summary is one line long:

Nomad gets a new costume.

There is more to the story than that. Jack Monroe, former sidekick to Captain America, quietly attends the funeral of Patty Joplin, a young woman who was his informant. She was also a drug addict whose habit was fed by drug dealer Umberto Safilos. Nomad is astonished to find Safilos at the funeral, invited by Patty’s parents. We get some tough guy action between Nomad and Safilos’ henchmen. Safilos suggests Monroe talk to the Joplins.

This is not your average gritty story. Though Nomad thought Safilos was Patty’s pimp, the situation is somewhat more complicated than that. Safilos is the father of the child Patty turned over to her parents to be raised. There is a stalemate between the Joplins and the drug dealer. Safilos knows of serious improprieties in Patty’s father’s business. The Joplins are raising his child.

Nomad isn’t sure what to do next, but he knows he has to change how he operates. The new costume is part of that.

I enjoyed this dark story of a dark world. I recall enjoying both the Nomad limited and ongoing series as well. If Marvel collected those issues in a trade paperback or two, I would more than likely buy them.

The annual also has two Captain America stories. The first - “You Are What You Eat” (23 pages) - launches “The Terminus Factor.” The five-part serial ran through this and four other annuals. I have no memory of this serial whatsoever.

This story was written by Roy Thomas with art by Jim Valentino and inker Sam de la Rosa. The GCD summary:

Cap is helping investigate a live volcano when a strange luminous substance escapes the lava and inhabits the local pond. When the villagers (and Iron Man) eat the tainted fish, they go berserk and attack Cap.

Tainted fish? Was this a remake of Airplane?

The second Captain America story - “ A Soldier's Story” (22 pages) is written by Randall Frenz with art by Mark Bagley (pencils) and Mike DeCarlo. The GCD summary:

Reb [Ralston] is shot and dreams of an adventure where Cap and the [Howling Commandoes] saved the Starks from the Red Skull.

I have no memory of this story either.

Since I liked the Nomad story, the 1990s have tied the score 2-2 in  this series of Marvel Firsts: The 1990s Omnibus reviews. I’ll be doing more of these reviews in the future.

Tomorrow is “Rawhide Kid Wednesday” with our straight-shooting hero going up against the “Guns of the Comancheros!” See you then.