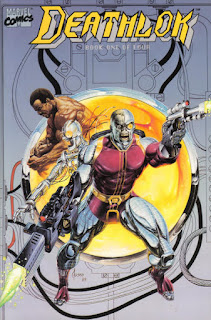 What Has Gone Before: Marvel Firsts: The 1990s Omnibus [$125] was an impulse buy because I hadn’t enjoyed many of the Marvel comics I had read during the 1990s. Even the solicitation for this giant,  1288-page hardcover refers to the 1990s as “comics' most divisive decade...”

Though I’d gotten a deal, I was faced with the knowledge I’d spent fifty dollars on this volume and should read it. I decided to read a story here, a story there and write about them in mini-bloggy things. This allows me to amortize the cost of the book over many mini-bloggy things and write it off as a business expense.

Deathlok #1 [July 1990] was the first issue of a four-issue series that was one of my favorite comics series of the year. Here’s the Grand Comics Database synopsis of the 52-page issue:

Michael Collins, a Cybertek employee, uncovers evidence of the Deathlok project and he confronts the company's head, Harlan Ryker. Ryker has Collins drugged and then puts his brain in the Deathlok cyborg. While the cyborg is on a mission for Roxxon putting down guerillas in the South American nation of Estrella, Collins' mind unexpectedly awakes and gains some control of the cyborg which is quickly recalled to Cybertek. At Cybertek, Collins achieves full control of the Deathlok cyborg and escapes.

Writers Dwayne McDuffie and Gregory Wright pushed all my buttons in this first appearance of their new Deathlok. From the get-go, this series confronts and dismantles the concept of a hero being little more than a man with a big gun. It shows a strong black family and a man whose sense of morality remains intact even when he’s trapped in an artificial body. It showcases the horror of the military-industrial complex President Dwight D. Eisenhower warned us about back in 1961. Corporations aren’t people. Too often, corporations are monsters and that’s certainly the case in Deathlok.

For me, this was a breakout series for Jackson “Butch” Guice, whose pencils conveyed both the humanity and the horror, both the man and the machine with uncommon grace and power. Inker Scott Williams was on point with his contribution to the issue. Small wonder they are both favorites of mine.

The coloring (Wright, Paul Mounts, Brad Vancata) and the lettering (Richard Starkings) strike me as uneven when I look at this story with my 2016 eyes, but both are better than most of what we saw in the comics of the era. The use of the computer in these areas was still relatively new.

Joe Jusko’s cover has a sort of “Mars Attacks” trading card vibe to it. It’s good, but not great.

This being a 1990 comic, there were no credits for Rich Buckler and Doug Moench, who created Deathlok in  Astonishing Tales #25 (August 1974). Mike Peterson, a new incarnation of Deathlok, now appears  on the Agents of S.H.I.E.L.D. television series. He’s played by J. August Richards, a favorite of mine from his role as vampire hunter Charles Gunn on Angel.

Deathlok: The Living Nightmare of Michael Collins [2012] reprints all four issues of this series in hardcover. As one of my picks for the 1000 Comic Books You Must Read (currently available on Kindle), it gets my highest recommendation.

If you like this “Marvel Firsts: The 1990s” series of mini-bloggy things, you’re in for a treat. I’ll be posting new installments on Monday and Tuesday this wee. See you then.