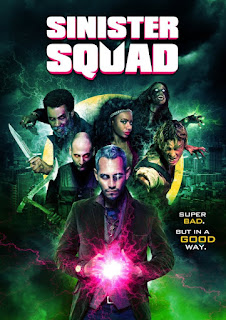 The Asylum is best known for Sharknado and its three sequels, but the company has made well over a hundred films in just about every genre you can imagine. Because of its ability to make movies quickly, Asylum is also known for producing “mockbusters.” Wikipedia defines the term thus:

A mockbuster is a movie created with the intention of piggy-backing on the publicity of a major movie with a similar title or subject or both. Mockbusters are often made with a low budget. Unlike films which are produced to capitalize on the popularity of a recent release by adopting similar genre or storytelling elements, mockbusters are generally produced concurrently with upcoming films and released direct-to-video at the same time the mainstream film reaches theaters or video outlets.
Sinister Squad [2016] is the Asylum’s “mockbuster” of DC’s Suicide Squad, but from a modern “fairy tales” sensibility. It’s similar to last year’s Avengers Grimm, which I enjoyed enough to suggest to my friends at the Asylum that they make a sequel. They should listen to me. I thought Sharknado would be huge before anyone else did. From the back cover of the DVD:

When a violent supernatural cult known as Death’s Messengers reigns [sic] terror on Earth, a team of malevolent storybook villains is captured and coerced into fighting in the modern world, but these baddies must learn to keep their true wickedness at bay if they want any chance at freedom.

Alice aka Mad Alice [Christina Licciardi] is this movie’s Amanda Waller counterpart. Her experience in Wonderland has unhinged her, but she is as clever and conniving as she is cracked. Her team is a mix of heroes, villains and creatures somewhere in between those nomenclatures. She controls the true villains by means of exploding wrist bands. How Waller-like of her.

Rumpelstiltskin [Johnny Rey Diaz]. He’s created the situation the world faces by stealing and accidentally breaking the Magic Mirror which allowed travel between worlds. Death [Nick Principe] wants to rule this world, but he can only exist in it for brief periods by possessing the bodies of his slain cultists. Rumpelstiltskin is the trickster type; you never know which side he’s playing on or if he is playing both sides for his own benefit.

Goldilocks [Lindsay Sawyer]. She looks a little like Harley Quinn. Though human, she can fight as well as the supernatural creatures she encounters. She can control the Big Bad Wolf [Joseph Michael Harris], a man-beast who doesn’t want to kill people in his rage. There’s a Black Widow/Hulk vibe to their relationship.

Gelda [Talia A Davis] is a not-unfriendly witch, mostly in this on account of she and Rumpelstiltskin are lovers. Wears too much makeup.

Bluebeard [Trae Ireland] is the vicious wife-murderer of historical fame. He has magic knives, which he refers to as his “wives.” When he kills someone with these knives, he becomes stronger.

Piper [Isaac Reyes] is the Pied Piper. He’s good with a flute that shoots darts and is a nimble combatant.

Tweedledee and Tweedledum [Aaron Moses] are the custodians of “The Looking Glass,” the office building slash warehouse where Mad Alice keeps her prisoners and where most of the action takes place. You save a lot on sets that way.

Hatter [Randall Yarbrough] is the Mad Hatter of Alice adventures. He’s stoned out of his mind throughout the picture and occasionally has visions. Sometimes those visions are helpful.

Carabosse the Cannibal Witch [Fiona Rene] is insanely in love with Death and wants them to be together forever. She’s like Thanos, but with hideous makeup that utterly disguises the otherwise attractive Rene. Her every scene is like fingernails on a chalkboard.

I spent this much space talking about these characters to emphasize that there was a good movie hidden underneath this not-good movie. The acting ranged from tolerable to really clumsy, though Diaz’s Rumpelstiltskin was intriguing. The story dragged in places...and its convoluted plot twists took it off the rails in other places. The camera work was sometimes bizarre and shaky, as if the film was partly one of those “found footage” cinematic nightmares I loathe. The low budget shows throughout the movie.

To its credit, Sinister Squad delivers a satisfying conclusion that works very well for me. So many horror/monster movies end on a dumb “oh, you’re boned, after all” note that I was surprised to see this one avoid that cliche. That alone would raise it above the dismal 20% audience rating it currently has from Rotten Tomatoes.

My recommendation? This 90-minute movie is worth watching once for the character and story concepts. I wouldn’t recommend buying it. Try to get it from your local library - as I did - and watch it for free. If you can’t get it through your library system, rent it for the lowest price you can find.

On a scale of zero to five bowls of porridge, I give Sinister Squad two bowls that have cooled a little too much and need to go back in the microwave for a bit.

My intended bloggy thing schedule has been upended by the demands of my oh-so-thrilling life, but I’ll return on the morrow with more stuff. See you then.

Posted by Tony Isabella at 6:54 PM