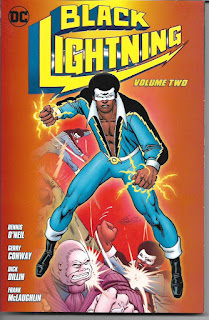 There’s a lot going on with Black Lightning right now. There will be a star-studded premiere of the TV series at this weekend’s “DC in D.C.” event in Washington, D.C. I’ll be there as a guest of DC Comics, for which I thank them. Expect a full report on the event sometime next week.

Popping up all over are Black Lightning billboards, subway posters, magazine ads, TV ads and even, in Times Square, a Black Lightning tour bus. Advance reviews of the TV series have been nothing less than spectacular.

The six-issue Black Lightning: Cold Dead Hands comics series by me, artist Clayton Henry, colorist Pete Pantazis, letterer Josh Reed, associate editor Harvey Richards and group editor Jim Chadwick has been getting great reviews online. I’ve been doing a whole bunch of interviews in support of both the comic book and the TV series. It is an exciting time for me.

I’ll be covering all of the above in future installments of “Black Lightning Beat,” but, for today, I want to go back away and speak about the importance of giving proper credit where credit is due. Warning: what seems to be ethical and straightforward to me might not seem that way to others.

Black Lightning Volume 2 [$19.99] will be hitting the comics shops any day now. For the first time ever, this trade paperback collects  my creation’s major appearances following his original 1970s run. I wrote a new introduction for the book, which is only fair since I was the guy who suggested and urged DC to do this book before a collection of my 1990s Black Lightning stories. I wanted to see as many Black Lightning stories back in print as possible and I wanted to see some talented writers and artists pick up some of that sweet reprint money. I aspire to a niceness that often eludes me at other times in my life.

My delight over seeing my contributor’s copies of this collection was unfortunately marred by an embarrassing credit mistake. As I’ve told anyone who would listen and some who don’t want to hear from me ever again, the official creator credit line is: Black Lightning created by Tony Isabella with Trevor von Eeden.

DC Comics got it wrong in Black Lightning Volume Two. The company, through its representatives, have apologized for the credit error. They have promised to correct in the digital copies of the volume and in any future print editions. I accepted their apology because, if a lifetime in the comics industry has taught me anything, it’s that mistakes happen and they usually happen without malice. But do not equate my understanding with my being okay with this mistake. It pisses me off. It will always piss me off.

I consider myself the creator of Black Lightning. Not a co-creator. The creator. As I have stated in many interviews over the decades, everything important about Jefferson Pierce and Black Lightning was created by me before I brought my creation to DC Comics. This was recognized by DC Comics with the original creator credit line that appeared in all of the character’s appearances during his original 1970s run and his solo stories in World’s Finest Comics.

This creator credit line was changed without my knowledge and in violation of my agreement with DC Comics when Black Lightning began appearing in Detective Comics. A writer, taking his cue from what he’d seen in movies and on TV, changed it to “Based on a character created by Tony Isabella and Trevor Von Eeden.” That credit was a false on two counts. The character he wrote was not based on Black Lightning as created by me. It was Black Lightning created by me. Nor was Trevor von Eeden, as much as he contributed artistically to my first series, an actual co-creator of Black Lightning.

The further revised creator line of “Created by Tony Isabella and Trevor von Eeden" began appearing immediately after I inquired about buying out DC’s interest in Black Lightning. This was not, as I saw it then and see it today, remotely a coincidence. The DC editor/executive who allowed it was attempting to diminish my ownership claim to the character.

Some will claim that the original Black Lightning costume, in which my friend Trevor played a key role, is worthy of co-creator status. However, there were three other people involved in designing that original costume. I came up with the lightning piping on the suit and what I called the “Captain America boots.” Bob Rozakis came up with the Afro-mask. Joe Orlando opened up the shirt on the original costume because he wanted to show more of the hero’s black skin. Trevor pulled it all together with his own design elements. It was a good looking costume for the times. Disco was fun in the 1970s, too, but its time has passed as well.

There have been several Black Lightning costumes since then. None have materially changed the nature of my creation. Yes, some less-than-adequate writers have screwed up the character, but, today, in the new comic-book series and the TV series, we again have a Black Lightning faithful to my creation’s core values. With nary an Afro-mask or 1970s disco vibe in sight. Still, times have changed since 1976 and a newer sensibility is in place when it comes to listing the creators of comic books and comic-book characters.

Current comics industry standard is to list both the writer and the artist as co-creators. Do not mistake this convention for absolute accuracy. Sometimes a writer is the actual creator. Sometimes the artist is the actual creator. Sometimes an editor plays a key role in the creator of a character. The comics industry standard is more a convenience for the bookkeepers than verifiable historical fact. Editor Mort Weisinger was, at the very least, a co-creator of Green Arrow and Aquaman and other characters launched during his tenure at DC Comics, but you never see him created as such.

When DC Comics and I started negotiating an agreement to cover our past and future relationship, the Black Lightning creator line was a vital part of those negotiations. Some of the suggestions would have taken up two or three lines of copy, much as does the current credit on the Superman titles. I thought the longer suggestions for Black Lightning were clunky. The line that all parties eventually agreed upon was one suggested and written by me: Black Lightning created by Tony Isabella with Trevor von Eeden. That’s the credit line DC is legally obligated to use at all times.

SIDEBAR. That official credit line will probably not be used in the TV series. I was given the choice of two credit lines for the show. I chose the one preferred by Warner Bros because I recognize that comic books and TV shows, even those that draw from the same basic material and share the same core values, are not the same thing. I don’t know how the credit line for Salim and Mara Brock Akil will read in the TV series, but they definitely deserve to be credited for their work in developing and creating the TV version of Black Lightning. And I’m 100% fine with that. END OF SIDEBAR.

Here’s what the “with” in the official Black Lightning credit line means to me:

It means that I am the sole creator of Black Lightning while also recognizing Trevor’s contribution to the art of the original 1970s series. I never wanted Trevor to be ignored. I always wanted my friend to share in the financial rewards earned from the character. But do I consider him the co-creator of Black Lightning? I do not. I consider him the co-creator of Tobias Whale and some of the other supporting characters in the first 1970s series because, based on my script descriptions, he designed those characters. That’s what the official credit line means to me.

In the best of all possible worlds, when writers write about movies and TV shows born of comics, they would credit the comics creators who conceived the characters and situations in those shows. After all, it only takes one more sentence to say Green Arrow was created by Mort Weisinger and George Papp. When you have an ensemble show like Legends of Tomorrow that features multiple leads, I understand not listing every creator of every character in your news article. I accept that most mainstream writers don’t care about or even know the writers and artists who created the characters. That’s a change that will be long time coming. If it ever comes.

But when it comes to comics websites - Bleeding Cool, Comics Beat, Comic Book Resources. Comics Reporter and all the others - there’s no excuse not to credit the comic-book creators and to credit them properly. These comics creators are of the tribe, so to speak. They are your people. They deserve your respect. They deserve that one more sentence it takes to show them that respect. To fail to do so is wrong. To deliberately fail to do so is dickish.

That’s what I wanted to say today. I’ll be finishing up some loose ends tomorrow in preparation for my weekend trip to Washington D.C. and the sure-to-be-sensational “DC in D.C.” event that includes the world premieres of the Batman: Gotham By Gaslight animated feature and the Black Lightning TV series.

I’ll be back on Monday, January 15, with the first installment of an entire week’s worth of “Black Lightning Beat” columns. We’ve got a lot to talk about. See you on Monday.