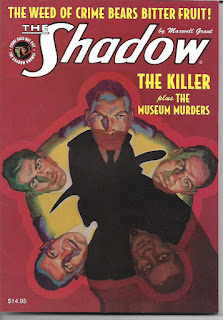 The Shadow #107: The Killer & The Museum Murders [May 2016; $14.95] presents two full-length novels. Both were written by Walter B. Gibson, writing under the house name Maxwell Grant. The theme the novels share is...treasure. Bad people want it. The Shadow doesn’t want them to have it. I’ll overlook the hilarious trivia that there are no murders in the second novel.

The Killer hails from The Shadow Magazine dated November 1, 1933. From the back cover:

The Killer launches a campaign of serial murder until he makes an appointed with death - and The Shadow!

The Museum Murders first appeared in the January 1, 1943 issue of The Shadow Magazine. From the back cover:

Will Murray’s informative “Interlude” essays are the first thing I read when I pick up a Sanctum Books publication. Murray knows stuff I didn’t even know I didn’t know and I always learn a lot from his writings.

Editor/publisher Anthony Tollin also contributes terrific essays to  these books. This time around, he has a concise biography of Walter B. Gibson and background on the Iron Munro comics story that rounds out this issue.

Created by science fiction editor and writer John W. Campbell for the novel The Mightiest Machine, Iron Munro was reinvented for the comic books. His first several tales were adaptations of the novel. They ran in Shadow Comics. The hero moved to Army and Navy Comics and this story, the second drawn by George Tuska, appeared in the second issue of that title [August 1941].

The front cover for this volume was painted by George Rozen. Art on the back cover is by Rozen, William Timmins and George Tuska with the interior illustrations by Tom Lovell and Paul Orban.