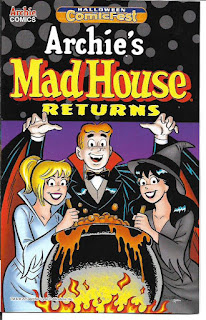 Hey, kids! It’s time for our final look at the free comics given out for Halloween ComicFest.

Halloween ComicFest is the celebration of Halloween and comics! The event takes place October 28th at participating comic shops. FREE Halloween themed comics are available, along with a chance for fans to participate in "The Greatest Halloween Costume Contest Ever!" It’s a great event for comic and Halloween fans of all ages!
Like Free Comic Book Day, Halloween ComicFest happens but once a year. Every year, I get the books from my pals at Stormwatch Comics in West Berlin, New Jersey. Some of the comics are digest-size and some are full-size. After receiving them - there were thirty comics for 2017 - I read and reviewed them. I judged the individual issues on three criteria:

Archie’s Madhouse Returns 2017 [Archie Comics] was a 16-page, full-color digest-size comics. It featured the 11-page “The House on Oak Street” by Rich Margopoulos with art by Gene Colan (pencils) and Rudy Lapick (inks), the one-page “Shadow of Doubt” gag strip and a cover by Bill Galvin. The Margopoulos/Colan story first appeared in  Life with Archie #278 [May 1990].

QUALITY: The lead story centered around an old house, which is said to be haunted. Archie is drawn to the house where, after a chilling night, he learns its secret. Solid writing combines with the fluid art of the legendary Colan for a good story. I especially loved how Colan could balance his distinctive style with the traditional look of the Archie characters. The one-page gag strip made me chuckle.

ACCESSIBILITY: The traditional Archie characters are so well known that almost any reader will be able to follow the story. There is a reason, often lost on current Archie writers and artists, these characters are still considered classic.

SALESMANSHIP: The inside front cover has an ad for nine different Archie collections. Only three of them feature the kind of stories
seen in this free comic book. 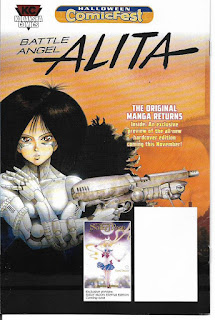 ACCESSIBILITY: The Akira and Sailor Moon excerpts were pretty easy to get into. There wasn’t enough of the Battle Angel Alita story to clue me in on what it was about.

SALESMANSHIP: Excellent. There are ads for collections of all three series. Plus ads for some other publications. 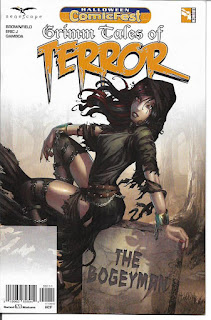 Grimm Tales of Terror Volume 2 #9 [Zenescope] was a 32-page, full-color, full-size comic book. According to the inside front cover, “this terror-filled series re-imagines the creepy stories you know and love for a new generations of readers.” This free comic book presented “The Bogeyman,” a 22-page seemingly done-in-one story by Joe Brueha, Ralph Tedesco, Troy Brownfield and artist Eric J. But I could easily see it as being the opening chapter of an ongoing  series.

QUALITY: Good. It was a solid story that didn’t develop characters as well as it could have, but the writing and art were both better than average.

ACCESSIBILITY: The inside front cover had everything you needed to know. The story unfolded in a straightforward manner.

SALESMANSHIP: Excellent. There was an ad for various Grimm Tales of Terror paperbacks and ads for other Zenescope titles. The emphasis on most of the covers was more cheesecake than adventure or horror. 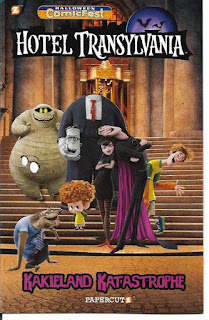 Hotel Transylvania “Kakieland Katastrophe” Hollywood ComicFest #1 [Papercutz] was a 16-page, full-color, digest-size comic. It had a 12-page excerpt from the graphic novel by writer Stefan Petrucha, artist Allen Gladfelter and colorist Laurie E. Smith. When Stephen Cling, wealthy owner of a nearby theme park, wants to expand his holdings, he turns a greedy eye on the Hotel Transylvania. Though the hotel has become human-friendly, Cling uses social media to get people scared of monsters again.

QUALITY: First-rate. The monsters were a likeable bunch. Cling was a devious rat. The excerpt contained funny moments and a serious sense of danger for Drac and his friends.

ACCESSIBILITY: Pretty good. An inside front cover by Jim Salicrup, Papercutz editor-in-chief, helped set up the basics of the series. Drac and the other Hotel folks are like their movie counterparts. If you’ve seen the movies, you know the characters. 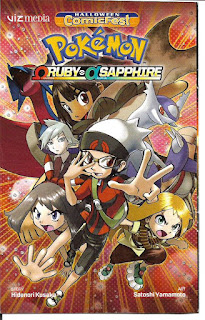 Pokemon Omega Alpha and Alpha Sapphire [Viz Media] was a 16-page, black-and-white digest-size comic book. It features a 12-page chunk of a manga series inspired by video games. Anything inspired by a video game automatically gets a point deducted. Hidenori Kusaka was credited with the story and Satoshi Yamamoto with the art.

QUALITY: Poor. There wasn’t anything in this excerpt that made me want to read more of the same.

ACCESSIBILITY: Poor. If you don’t play the video games, you have to go to Wikipedia to find out what the games are about. As there is no entry for the manga, I haven’t clue one on how closely it might follow the plot of the game.

SALESMANSHIP: Minimal. As in a single ad for the first manga volume tucked into the bottom portion of the inside front cover.

SCORE: Zero out of ten points. 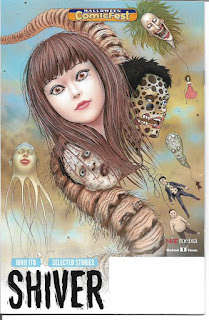 Shiver: Junji Ito Selected Stories [Viz Media] was a 36-page, black-and-white, full-sized comic book featuring a 32-page story by Ito. It was one of the nine short stories selected by the renowned horror author for his collection of the same name.

QUALITY: Very good. This was an honestly scary story about a cursed jade carving and the strange deadly effect it has on people. Based on this story, I plan to read more of Ito’s work.

ACCESSIBILITY: Since this was a done-in-one story, it was easy to follow from start to finish.

SCORE: Eight out of ten points.

Today’s column concludes my reviews of 2017's Halloween ComicFest’s free comics. The next time I do something like this series will be when I receive the 2018 Free Comic Book Day offerings.

Coming up tomorrow: a new installment of “Rawhide Kid Wednesday.” See you then.

Posted by Tony Isabella at 8:47 AM