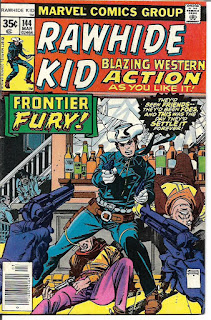 RESOLVED: The Rawhide Kid is my favorite western comics character and one of my favorite comics characters period.  This is why I’ve written over a hundred columns about him. Something about his short stature, but large courage, honor and fighting skills speaks to me.  After rereading the Kid’s earliest adventures when Marvel reprinted them in a pair of Marvel Masterworks and an Essential Rawhide Kid volume, I decide to reacquire every Rawhide Kid comic, reread them and write about them. We’ve reached the title’s extended twilight.  We’ve seen the last new Rawhide Kid story that will appear in the now-bimonthly reprint series. This is the 131st installment of my “Rawhide Kid Wednesday” columns.

The Rawhide Kid #144 [March 1978] has another terrific Gil Kane cover. This would be Kane’s last cover for the series. Subsequent covers would be by Gene Colan, Tony DeZuniga and others. 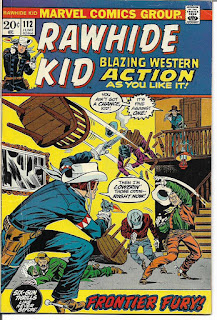 This issue reprints “Frontier Fury” from The Rawhide Kid #112 [June 1973], just five years earlier. The cover to that issue was drawn by Larry Lieber (pencils) and Herb Trimpe (inks). In its original version, “Frontier Fury” ran 14 pages. For this reprinting, a full page was cut. Cutting pages from reprints was the job I most hated when I was working on Marvel’s color reprint titles. Thinking about it still leaves a bad taste in my mouth.

“Frontier Fury” was written and drawn by Larry Lieber with inks by George Roussos. It was one of the first Rawhide Kid stories I saw in various stages of progress. I was sharing an office with George and Larry was a frequent visitor. 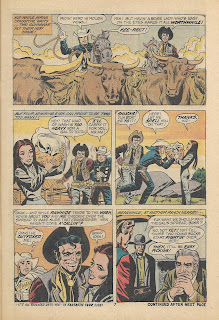 Page six was cut from the original story to fit the page count of the reprint. I have included that missing page for you. The first caption of the original page seven was charged from...

And the ruthless landgrabber hasn’t long to wait!

...to what you see in this panel from the reprint. 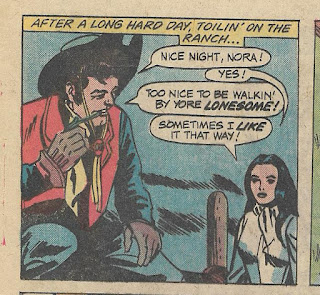 This issue’s paid advertising is much the same as it has been for months. The inside front cover is the Johnston Smith company with its cheap-ass novelty items. Inside the issue, there’s a half-page ad for cheap-ass stuff from the Fun Factory. There’s another full-page ad for “Super Sea Monkeys,” but also a full-page ad for Hardy Boys and Nancy Drew t-shirts. 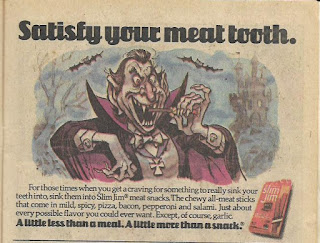 Jack Davis drew another monster-themed half-page ad for Slim Jim meat snacks, which are “A little less than a meal. A little more than a snack.” Grit has a half-page ad looking for salespeople to sell the newspaper. There are also half-page ads for Clark candy bars and Mike Marvel’s secrets of developing strong arms.

Two more full-page fitness ads are in the issue. Something called “Synometrics” promises to turn belly fat into a rock-hard and lean stomach. Universal Bodybuilding offers a course they claim will put inches of powerful muscles on your body. 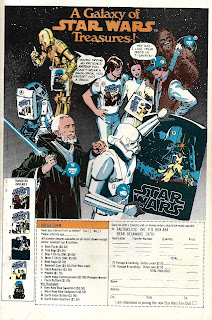 The inside back cover advertises “A Galaxy of Star Wars Treasures.” These include back packs, tote bags, t-shirts and more. The back cover has the American Seed Company signing up salespeople to sell seeds, make money and get prizes. Ho-hum!

There are the usual three pages of classified-style ads with 24 ads for mail-order dealers selling old comics. That’s up two from last issue. The only other comics-related ad is one for 3 mil comic-book storage bags. The cost is three bucks per a hundred bags. 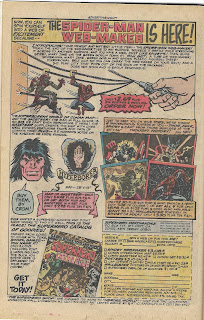 Superhero Merchandise aka Heroes World has its usual full-page ad. The headline item is the Spider-Man Web-Maker. For $3.08, you got a tube of web-maker, Spider-Man, Green Goblin and Mary Jane plastic figures, a three-dimensional belt clip to hold your web-maker and a 3-D play city that pops out of the back of the package. The other advertised items: a Conn Hyperborean map ($5.45); Conan Gazetter ($5.45); posters of Captain America, Thor, Spider-Man and the Hulk ($3.10 each; all four for $10.23); and 38 x 50" wall buster posters of the Hulk and Spider-Man ($4.25 each).

Marvel’s half-page subscription ad, which we saw last issue, runs again in this issue. No changes that I could see. 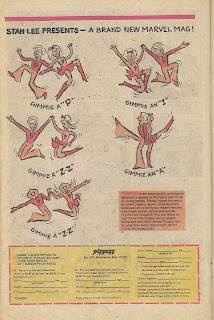 There was a new and frankly underwhelming full-page ad for Pizzazz, deemed “the new monthly magazine designed to appeal to the hearts and minds of young readers.” Nothing about this advertisement says “Marvel” to me. Not the art. Not the copy. I’m going to speculate that this ad was not produced by the Bullpen. 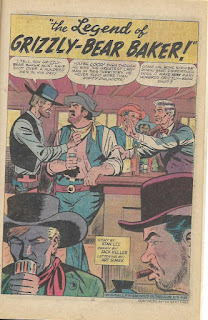 This issue’s non-series short story is “The Legend of Grizzly-Bear Baker!” from Two-Gun Kid #68 [March 1964]. It’s written by Stan Lee and drawn by Jack Keller.

Tempers are short in the town saloon as two jerks argue about how many men legendary lawman Grizzly-Bear Baker shot in his day. One man is convinced it was over a hundred. The other says Baker never shot more than fifty owlhoots. The saloon owner tries to calm them down. It doesn’t work.

The two men start fighting. It’s fists at first, but then they get ready to shoot it out with one another. The saloon owner tells them to knock it off. They taunt him. Bad move.

The old gent punches them in their chins. One man starts to draw on the saloon owner, who kicks the gun out of the man’s hand. When the other man draws on him, the old man shoots the gun out of his hand. I think you know where this is going, but why don’t I let the last two panels of the story speak for themselves? 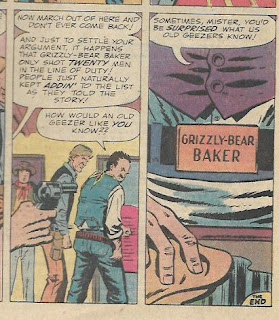 “Stan Lee’s Soapbox” is a nice change-of-pace from the plug-a-thons of recent issues. Stan wrote about the lectures he gives at various colleges. He made sport of his poor memory and professed a special love for the question-and-answer portion of those talks. He loved having to think fast on his feet.

Marvel Comics Super Special #2 would feature Conan the Barbarian in a novel-length epic based on a story by Robert E. Howard (Conan’s creator) and adapted by Roy Thomas and John Buscema with finished art by Alfredo Alcala.

Spider-Woman would soon debut in her own title. She was “revamped, redesigned and refined to a fare-thee-well” by writer Marv Wolfman and artists Carmine Infantino and Tony DeZuniga.

Luke Cage gets a new direction with his fiftieth issue as his book becomes Power Man and Iron Fist.

A coming issue of the black-and-white Marvel Preview will feature “The U.F.O. Connection” by writer David Anthony Kraft and artists Herb Trimpe and Klaus Janson.

Ed Hannigan left his assistant editor’s post to become a full-time penciler with Jim Salicrup replacing him. Mary Ellen Beveridge, the “Lady of the Fan Letters” left that post to become a colorist. Her replacement was “Heavenly” Helen Katz.

Ron Haydock, who wrote many articles for Monsters of the Movies and other Marvel magazines, passed away.

The Bullpen Bulletins page ends with teases. A secret project being worked on by George Perez and David Anthony Kraft. Plus planning sessions with Stan Lee, Chris Claremont and Dave Cockrum over an unnamed super-heroine. 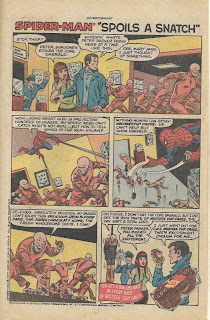 No more editorial pages in the issue, but we do get Spider-Man in an Hostess Cup Cakes ad drawn by Sal Buscema. In “Spider-Man Spoils a Snatch,” some criminal is projecting multiple images of himself as he steals a precious gem. Spidey tosses cup cakes on the floor to make the villain reveal his true self...because nothing human can resist Hostess Cup Cakes.

That wraps up this installment of “Rawhide Kid Wednesday.” We have seven more issues to go until the end of the trail for this title. Look for the next guns-a’-blazing installment in just seven short days.

For tomorrow’s bloggy thing, I’ll write about my recent adventures in Cleveland. That will be followed by anywhere from one to three installments of “Black Lightning Beat.” There’s a lot to cover on that front.

Thanks for stopping by today. I’ll see you tomorrow.

Posted by Tony Isabella at 9:31 AM