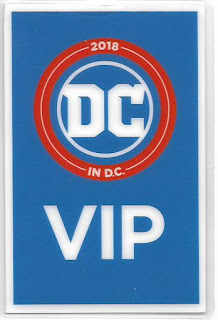 I seriously underestimated how much the extraordinary premiere of the Black Lightning TV series would impact my schedule last week. Which is why I’m here Sunday with a bloggy thing that should have been posted last Tuesday. To refresh my memory...

I was invited to last weekend’s DC Comics in D.C. event that would include the world premiere of the Black Lightning TV series. I went with my son Ed. Because our Friday flights kept getting cancelled, we missed a screening of the Batman: Gotham by Gaslight animated feature and dinner with Dan DiDio, Jim Lee and others. We also had to spent Friday night in the Cleveland Airport, which is not even a one-star accommodation. We persevered and arrived in D.C. around eight or so on Saturday morning. Our adventure resumes.

DC booked us at the Willard Continental on Pennsylvania Avenue. Because of my well-known liberal leanings and our proximity to the White House, I was strip-searched and probed by Stephen Miller. I’d rather not talk about it here, but I’ll be in therapy for the rest of my life. Indeed, I think my eventual grandchildren will be in therapy for the rest of their lives due to my DNA memory, which is a thing I just made up. Fake news.

Seriously, the Willard is a lovely hotel. Our room was large and, though we didn’t get to sleep until after midnight Saturday night, very comfortable. Our bathroom was bigger than my whole room at the Econo-Lodge where I’ve stayed on recent trips to New York City. No knock on the Econo-Lodge, which I do like, but I’m trying to give you a sense of the size of our Willard room.

After freshening up from our stay at the Cleveland Airport, Ed and I went to the lobby, got our passes for the “DC in D.C. event” and went to breakfast with Larry Ganem, DC Entertainment Vice-President Talent Relations and Editorial Administration. On a vice-president  scale of one to ten with Mike Pence being a one, Larry scored about a million. He is a charming, funny and terrific guy who took great care of me at the event.

I wore a Black Lightning t-shirt at breakfast. One of the servers spotted it and ask if I knew there was a Black Lightning TV series. I told him I’d heard something about that. Larry chuckled and told  the guy I was the creator of Black Lightning. The server said how happy he was to meet me. It’s as I’ve been saying, Black Lightning means a lot to a lot of people. It’s a honor and a responsibility to be associated with the character. 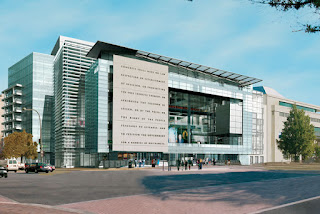 From the hotel, we headed over to the Newseum, the location for the daytime “DC in D.C.” events. This is a stunning building dedicated to free expression and the First Amendment. It was a great choice to host DC’s presentations on such topics as “The Many Shades of Heroism: DC Heroes Through the African-American Lens,” “The Pride of DC: The Art of LGBTQ Inclusion,” “Wonder Women” and more. I wish I had been able to attend all the panels.

In addition to the Newseum’s other exhibits, there were autograph sessions for the various comics creators and the stars of the shows featuring DC characters and, just outside the museum, a DC pop-up store selling Funko figures, shirts and trade paperbacks. Even with the chilly weather, the store did a brisk business.

Every one connected with DC treated me with great friendliness and respect. Larry introduced me to Diane Nelson, the President of DC Entertainment and the President and Chief Content Officer of Warner Bros. Interactive Entertainment. It was a short conversation, just long enough for her to thank me for coming to the event and for me to thank her for the invitation and for all she’s done to make DC a company I’m delighted to be once again associated with. I hope I get a chance to speak with her again soon.

SIDEBAR. If those other DC staffers will send me notes reminding me of our meeting and how they kept me from looking or saying anything foolish, I’ll praise them in a future bloggy thing. I owe you folks at least that and much more.

“The Many Shades of Heroism” was the one panel I was able to enjoy in its entirety. Moderated by David Betancourt (Washington Post), the panelists were Oscar-winning screenwriter John Ridley (12 Years a Slave); Candice Patton, who plays Iris West on The Flash; Black Lightning star Cress Williams; BL’s executive producers Salim Akil and Mara Brock Akil; Chris Chalk, who plays Lucius Fox on Gotham; legendary comics artist and Milestone Media founder Denis Cowan; Milestone writer Alice Randall; Black Girl Nerds editor-in-chief Jamie Broadnax; and, from Supergirl, David Harewood, who plays the Martian Manhunter on that series. It was a great panel and, as with great panels, it gave me things to consider as I continue to write Black Lightning and other comics.

After the panel, while waiting for a scheduled photo shoot with the cast and creators of the Black Lightning TV series, I had a chance to chat with David Harewood. I love his performance as a surrogate father to Kara and Alex on the show and we talked about parenting and such. That Kara and Alex are his character’s surrogate children makes their dynamic all the more realistic. I’m the proud father of a dynamic young woman and Harewood’s J’onn speaks to me. Plus, he was rocking a cool Black Lightning t-shirt. 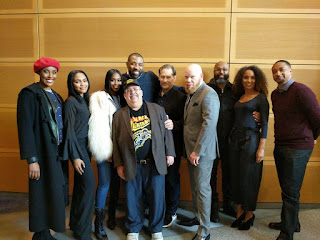 The photo shoot was a dream come true. I got to speak with most of the cast for a few minutes. Cress Williams had this big grin on his face and seemed as excited to meet me as I was to meet him. James Remar thanked me for creating Peter Gambi. I thanked him for doing such a great job with the character.

Christine Adams gushed a bit when I told her I loved her natural voice so much I decided the Lynn Stewart in my new Black Lightning comics would be British. China Anne McClain and Nafessa Williams were delightful. I might not have created the Pierce daughters, but their trailer performances made me know I wanted them in my comics. Even though they are Jefferson’s cousins in those comic books, I’m inspired by their work.

Marvin 'Krondon' Jones III is one of the nicest guys you could ever meet, but his Tobias Whale is incredibly menacing. Damon Gupton’s Inspector Henderson impacted me with his performance as a hard-as-nails cop concerned about his friends and fellow officers.

I got to say “hey” to Salim Akil again and finally got to meet Mara Brock Akil. My respect for them is off the chart.

After the photo shoot, the cast sat down for an autograph session. The DC Comics crew handed me a Black Lightning poster and allowed me to be the first to get it signed by the entire cast. It will be framed and hanging on my wall soon. 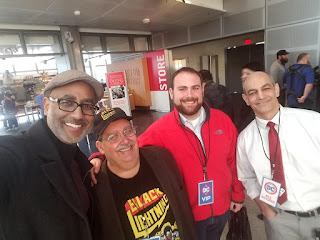 I lost track of all the great conversations I had at the Newseum. Artist extraordinaire Shawn Martinbrough was there and took a photo of the two of us plus my son Ed and Larry. Someday, somehow, I have to work with this man.

SIDEBAR. If anyone has photos of me from the event, please e-mail them to me or send me links to them. I’d love to put them together for a bloggy thing photo album of the day.

Michael Tune, a PhD student of African American women's history at George Washington University in D.C., was at the event. We’d talked some time back about Misty Knight. This time, he had questions on all sorts of other comics I’d written. It was a great conversation, not to mention a chance to get off my feet for a spell.

Ed decided to catch some of the remaining panels. Since I was going on no sleep, I opted to go back to the hotel and relax a bit. The world premiere of Black Lightning was scheduled for a couple hours later at the Smithsonian’s National Museum of American History. It would be preceded by a cocktail reception and red carpet arrivals, then followed by a question-and-answer session moderated by Orlando Jones. I figured my falling asleep during the premiere - as if that were possible - would send the wrong message to the audience and to everyone who had worked so hard on the show.

After the Q&A session, guests would be bussed to the Smithsonian’s National Museum of African American History and Culture for a very cool premiere party. Besides the party itself, the Museum would be open for guests to explore at their leisure. Have I mentioned this day was the best day of my 45-year career?

I want to do justice to the Black Lightning premiere and the events surrounding it. So let’s say we all come back here tomorrow for the next installment of my adventures. See you then.

Posted by Tony Isabella at 6:04 AM