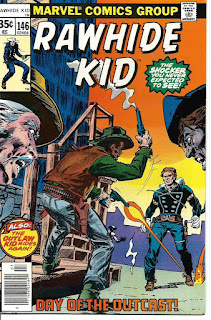 RESOLVED: The Rawhide Kid is my favorite western comics character and one of my favorite comics characters period.  This is why I’ve written over a hundred columns about him. Something about his short stature, but large courage, honor and fighting skills speaks to me.  After rereading the Kid’s earliest adventures when Marvel reprinted them in a pair of Marvel Masterworks and an Essential Rawhide Kid volume, I decide to reacquire every Rawhide Kid comic, reread them and write about them. We’ve reached the title’s extended twilight.  We’ve seen the last new Rawhide Kid story that will appear in the now-bimonthly reprint series. This is the 133rd installment of my “Rawhide Kid Wednesday” columns.

The Rawhide Kid #146 [July 1978] has a cover by Tony DeZuniga and, unlike previous new covers for this title, it actually illustrates the cover story. 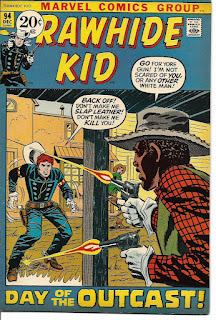 The inside front cover of the issue is for Universal’s free booklet on seeing your muscles grow every day. It’s a come-on for a course that would cost a customer far more than the 25-cent postage costs of the booklet. Most of the issue’s ads are just as common to the comics of the era: Nash skateboards; Slim Jim meat snacks (with a Jack Davis vampire we’ve seen before); Grit newspaper looking for salespeople; a contest for buyer of Sugar Babies and other candy with the prizes being free bikes, Burger King hamburgers and more candy bars; Mike Marvel’s $3.98 book on strong arms; Nirsek fishing outfits; and a Jack Davis-drawn ad for Spaulding basketballs with “autographs” of star players. 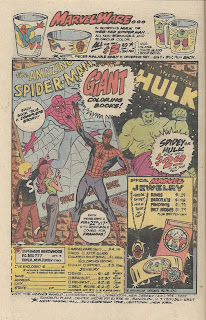 Heroes World’s usual full-page ad offers all sorts of Marvel stuff. A set of MarvelWare (mug, glass, juice glass and soup bowl) is just $4.14. The individual items are $1.68 each. Giant coloring books of Spider-Man or the Hulk are $3.19 each. Then there’s Marvel Jewelry featuring your choice of Spidey, the Hulk, Thor or Captain America. The rings are $1.68 each. The bracelets are $2.37. The pendants are $2.18 each. The belt badges are also $2.18 each. I’m interested in seeing what these items looked like in real life, so I guess some web-searching is in my future.

The most interesting ad in this issue is a four-page centerspread for “Famous Clark Bar Superhero Sweepstakes!” The winner would win a trip to New York and appear in a Marvel super-hero comic. Second prize winners would receive a super-hero watch. Third prize winners would receive a year’s subscription to their favorite Marvel or DC comic. Plus there was all kinds of super-hero swag that you could buy with a combination of candy-bar wrappers and cash. I think this is a subject I need to research further, but, in the meantime, here are all four pages of the centerspread. 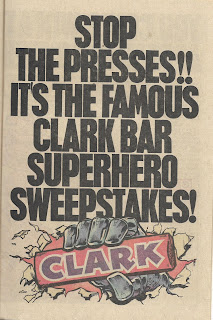 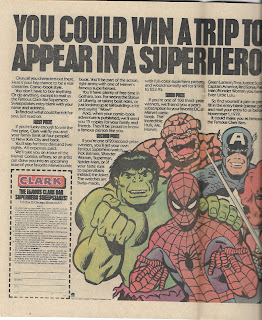 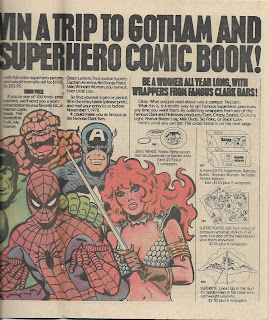 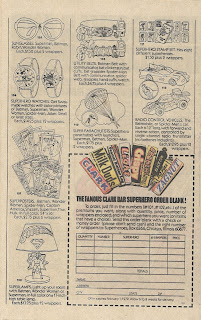 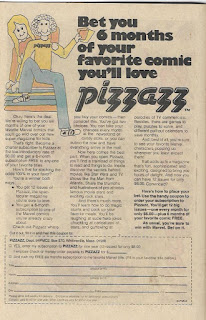 We’re down to two pages of classified ads this issue. There are 22 ads for mail-order comics dealers (down just one), a new ad for The Buyer’s Guide For Comics Fandom and a ad offering 3 mil comics storage bags for three bucks per hundred. 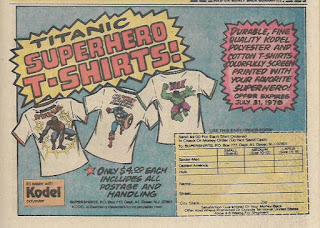 Elsewhere in the issue, there’s a half-page ad for Marvel t-shirts at four bucks each. There are three shirts: Spider-Man, the Hulk, Captain America). The shirts come in three sizes: Small (size 8), Medium (10-12) and Large (14-16). 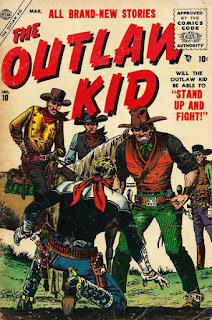 The Outlaw Kid debuts as the regular back-up feature in Rawhide Kid with “Stand Up and Fight!” from The Outlaw Kid #10 [March 1956]. We don’t know who wrote the four-page tale, but it was drawn and signed by the great Doug Wildey. The cover of the issue was drawn by the equally great John Severin. 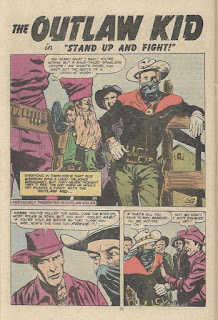 Loud-talking bully Gus Barrow calls out the Outlaw Kid who quickly out-shoots him. When Barrow challenges the Kid to fisticuffs, the Kid refuses:

A man doesn’t prove his courage by his fists or by guns! It’s something far more subtle than that...something you haven’t learned yet!

Barrow, not the sharpest spur on the boots, thinks he’s shown the Kid to be a coward and expects respect from the townspeople. When he doesn’t get it, he plans to ambush the Kid outside of the town.

Barrow’s horse, sensing danger ahead, stops abruptly. Barrow gets thrown into quicksand and is sinking to his death as the Outlaw Kid shows up. Risking his own life, the Kid lassos Barrow and, with the other end of the rope tied to his horse, enters the quicksand and pulls Barrow to safety.

Barrow has learned his lesson. He’s done being a bully and a fool. He’s a changed man, thanks to the Outlaw Kid. The story ends with the two men shaking hands.

The Outlaw Kid had his own (almost entirely) reprint comic book in the 1970s. This tale was reprinted in issues #3 [December 1970] and #19 [December 1973] before being reprinted in this issue of Rawhide Kid. Three reprints in less than a decade. The folks at Marvel must have really liked this short and straight-forward morality lesson. I like it, too.

This Bullpen Bulletins” page has gone through a design change and no longer lists the editorial staff. “Stan’s Soapbox” announced a changing of the guard as Archie Goodwin steps down from editor-in-chief to return to full-time writing and Jim Shooter takes over the top editorial spot. In some ways, this was good for Marvel creators and staffers. In many other ways, it was not. Most certainly, this will continue to be debated by fans and professionals.

In other news that month...

The live-action TV series of the Amazing Spider-Man and Incredible Hulk were described as smash sensations. Though the former had good ratings, CBS cancelled both it and Wonder Woman to avoid getting a reputation as “the superhero network.” But it kept the Hulk for 82 episodes and a couple of movies. A Doctor Strange TV movie was said to be due in April. Despite the claim that it was sure to be terrific, that one movie was all that was done.

Another item promised a Savage Sub-Mariner special in early spring. That never happened.

Roy Thomas would be taking over The Mighty Thor from writer/artist Walt Simonson, said to be working on other secret projects. John Buscema and Tom Palmer were the artists.

Marv Wolfman was reported to be chained to his typewriter, writing Nova the Human Rocket and Spider-Woman. Fake news. Except for his writing those two titles and many others.

Another item debated Chris Claremont’s proper Marvel nickname. Was it “Cheerful” or “Charismatic” or “Carefree?” This debate led to a plug for a Star-Lord special by Chris and Carmine Infantino.

A following item debated the correct pronunciation of “Magneto.” I always went with Mag-Neato.

Another item plugged The Defenders by David Anthony Kraft and Ed Hannigan, followed by an item about Hannigan writing Power Man and Iron Fist.

The penultimate item was about Dave Cockrum hanging photos clipped from magazines or newspapers for “caption contests.” It’s like my old friend Dave invented the Internet before the Internet existed.

The final item was a plug for the Dave Kraft-edited FOOM Magazine. The fall issue of the magazine would be the last. 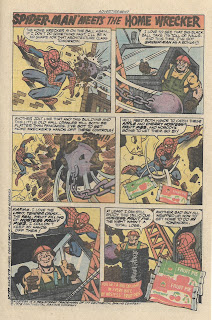 This month’s comic-book style Hostess ad was “Spider-Man Meets The Home Wrecker.” Once more, a villain was defeated by a Hostess tasty treat. This time around, humanity owed its salvation to delicious fruit pies. Yummy.

That wraps up this installment of “Rawhide Kid Wednesday.” We have five more issues to go until we reach the end of the trail for this title. Look for the next installment in seven short days.

If all goes as planned, tomorrow’s bloggy thing will be all about the premiere episode of Black Lightning. After that, I’ll likely be alternating “Black Lightning Beat” columns with other stuff. I’ve got a lot to say about my creation.

Have a great day. See you tomorrow.