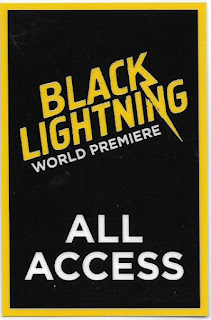 Having successfully navigated past Scylla and Charybdis to actually get to Washington, D.C. for “DC in D.C." (aka the hottest ticket in town), my son Ed and I spent several enjoyable hours at the Newseum portion of the event. You can read about our Friday night travels and Saturday afternoon in the bloggy things I posted last Tuesday and yesterday. We continue... 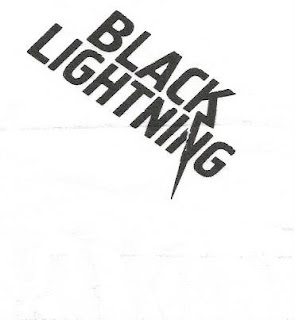 Shuttles were ready at the Willard Intercontinental Hotel to take us to the Smithsonian’s National Museum of American History for the world premiere screening of the first episode of Black Lightning. The evening started with a cocktail reception where the drinks and hors d’oeuvres came with Black Lightning napkins like the one shown above. Okay, not every napkin had the logo, but I managed to grab a few unused ones to I could have a memento of the event and scan one to share with you here.

Full disclosure. Much of the evening was an exciting blur for me. All I recall about the hors d’oeuvres is that they were delicious and there were lots of them. I didn’t eat lots of them. I was way too overwhelmed for that. But I know I ate enough of them to keep something in my stomach beyond whatever I drank. It might have been wine or it might have been champagne. I probably had both between the cocktail reception and the premiere after-party. I probably had a Pepsi or two. Excited. Overwhelmed. I was lucky just to remember my name at that point. 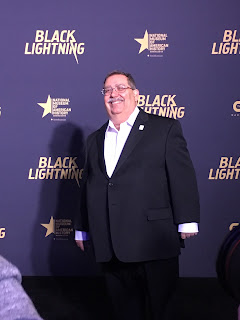 At some point, Larry Ganem, one of my favorite vice-presidents of all time, handed me over to one of the many helpful members of the DC Entertainment team to walk me down the red carpet. The nice lady who escorted me across the carpet made sure I looked okay - nobody was expecting miracles - and was probably ready to sedate me if I said anything stupid. I confident I didn’t say anything stupid, so some miracles do happen.

Most of the red carpet attention was deservedly on the great Black Lightning cast. By now you have come to realize that I am over the top in love with these actors. When I see my creations brought to life so wonderfully, when I see the characters I didn’t create come to mean as much to me as those I did create, it takes effort not to let the happy tears flow down my plump little cheeks.

I think I spoke to three of four reporters, one of whom might have been from the local NBC affiliate. I don’t know if anything I said made it to the airwaves or online or to print. If anyone has links to my red carpet comments, I’d love to check them out to find out if I owe anyone an apology. I don’t think I do, but I don’t recall what I was asked or what I said in response.

I’m going to assume I said nice things about how well Salim Akil, Mara Brock Akil, Cress Williams and the cast had brought my Black Lightning core values to reality. I hope I said that their work on the character inspires my current comic-book work on the character. I hope I conveyed how much Black Lightning means to so many comics fans around the world and that knowing that is a responsibility I will never take lightly. I hope I just didn’t go all Frankenstein Monster and just say “Arrh...Black Lightning good...arrh!”

Not-so-sudden realization. I need someone to follow me around when I do things like this to take notes for me. Or maybe I should start wearing a body camera.

My comments on Black Lightning’s premiere episode deserve a bloggy thing of their own, which will be coming your way within the next few days. I’d already seen the episode before the premiere, having been sent a link to a not-quite-finished version of the episode by my friends at the CW. I watched the episode at home with my Sainted Wife Barb, Ed, Kelly, “other daughter” Giselle and Kelly’s future roommate Lauren. This not-quite-finished version did not have any credits. When I saw this on the big screen... 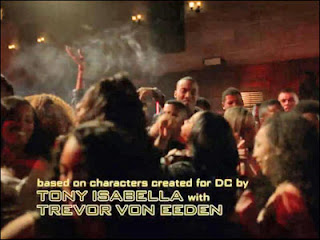 ...my heart darn near burst with pride and joy. This was what I had spent decades fighting for and, thanks to the current management at DC Entertainment, there was proof of my victory over those who had tried to keep me and my creation down.

After the premiere, Orlando Jones hosted/moderated a question-and-answer session with Salim and Mara Brock Akil and the cast of Black Lightning. The esteemed actor expressed his love for the character and the show, making thoughtful comments and asking some terrific questions of the panelists. Any success I’ve had writing Jefferson Pierce, his supporting cast and their lives is because I’ve always listened and learned from insightful and instructive conversations like this one. I have listened to people in the neighborhoods of Cleveland, at the East Coast Black Age of Comics Convention and other comics cons, in online forums and podcasts, and anywhere else where I could gain knowledge of the subjects I’ve been passionate about my entire career. 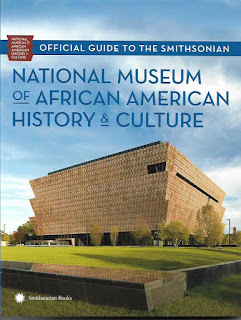 After the Q&A session, there were shuttles waiting to ferry us to the Smithsonian’s National Museum of African American History and Culture for the premiere after-party. The guide shown above was in the gift bags that guests received as they left the party.

The party itself was wondrous beyond my expectations. In addition to the amazing people at the party and the phenomenal food, drink and entertainment, guests were allowed to wander freely through the museum’s several floors of exhibits. Ed and I took some advantage of this, but hope to return at some later date to really check out everything the museum has to offer.

Ed and I had an incredible time at the party. He’s used to seeing excited fans come up to me at conventions. He’s not used to seeing actual celebrities wanting to take selfies with me. I scored a few “Dad points” that evening.

There’s no chance of me remembering everyone I spoke with at this event, but I’ll mention as many of them as I can before my ancient brain starts to boil. 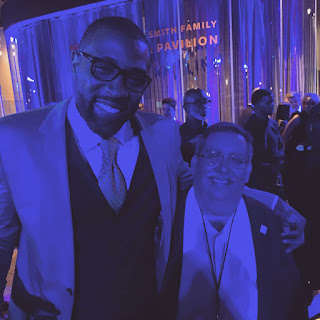 Cress Williams and I had met and chatted at the Newseum, but things were slightly less hectic at the party. This photo doesn’t really do justice at what a heroic figure he cuts and what a tiny “stout” man I am.

Orlando Jones and I had exchanged Twitter messages over the years, but this was my first time meeting him. I love that he’s a comics fan and I love his work. Given the crazy twists my career had been taking, I hope to someday get a chance to work with him on a movie or TV project. All I have to do is learn how to write screenplays. Which I’m working on.

Christine Adams and I had a few fun moments together. Earlier, I’d said her natural voice had inspired me to make Lynn Stewart British in my new Black Lightning comics. Stunned by Christine’s beauty - she’s right up there with my wife and Maureen O’Hara in The Quiet Man - I told her there was more to the comic-book Lynn and that I would be hinting at just that in Black Lightning: Cold Dead Hands #6. She smiled and proclaimed “Spinoff!”

Confession. I probably told her more about Lynn that I should have, but I was intoxicated by her and the party.

I made new comics friends, meeting writers Julie Benson and Shawna Benson. I’ve enjoyed their work on Batgirl and the Birds of Prey, and was excited to hear about their next gig. Thom Zahler, one of my dearest friends and a top-notch writer and artist, was there with lady friend Emily Whitten. She is a comics journalist, most recently contributing to the ComicMix site. Thom was her arm-candy.

Journalist and old friend Michael Rapoport was there. He’s going to do another interview with me in the near future.

One of the highlights of the party was getting to spend time with Dan DiDio, who has been a strong advocate of Black Lightning: Cold Dead Hands and the trade paperback collections of the character. We talked about all sorts of stuff, some of it relating to more Black Lightning comics written by me, some of it about forthcoming trade collections, some of it about our mutual love of Godzilla. I knew there was a reason I like this guy. I also learned some things from him which gave me some new insights into DC Comics. I hope to get to see him again soon. 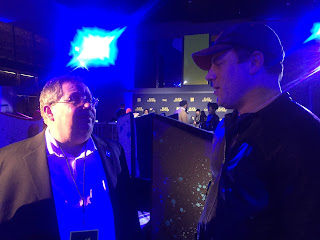 One of the other big highlights of the evening was finally getting to meet Geoff Johns. Geoff and I have exchanged emails and talked on the phone. We’re are fans of each other’s writing. But this was our first-ever face-to-face moment and it was an emotional one for me. I’ll tell you why.

After decades of - let’s face it - anomosity between DC Comics and myself - it was Geoff who reached out to me and started the company and I on the path to the relationship we enjoy today. He is a hero to the Isabella family. If you’ve been enjoying my current work for DC, it all started with Geoff.

My only regrets about this party is that I didn’t get to meet some of the people I would have loved to meet. There were cast members from Gotham, Legends of Tomorrow and The Flash, all shows I enjoy. There were comics creators whose work I enjoy. There were DC folks whose behind-the-scenes work makes terrific stuff like this happen. It was a magical night. 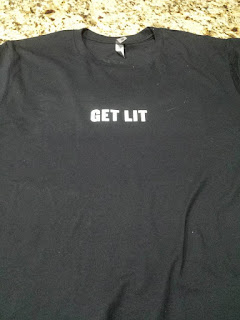 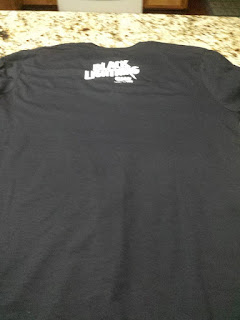 When we left the party, Ed and I got our afore-mentioned gift bags. Besides the museum’s office guide, there was a copy of the newest edition of Black Lightning: Year One and a spiffy “Get Lit” shirt. My shirt was just a bit too small for me, but daughter Kelly wore it during our Casa Isabella cast party. 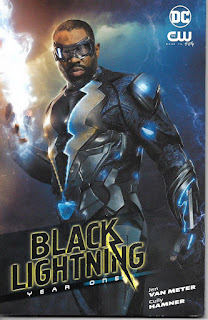 As for Black Lightning: Year One, it’s no secret that I’m not fond of that book. But, what’s also no secret is that Black Lightning is bigger than just me. Every version of the character has its devoted fans and, for those fans, I would be thrilled to see all the Black Lightning stories back in print and kept in print. Just because I don’t enjoy something doesn’t mean others won’t.

When Ed and I got back to the hotel, we were too pumped to go right to bed. He were also feeling a bit peckish. So we ordered some room service and packed our bags for a Sunday morning flight back home. After the nightmare of our flight to D.C., we were glad our return flight was as smooth as could be.

I want to again thank everyone at DC Entertainment for making this weekend happen for me. I want to thank Salim and Mara and the cast of Black Lightning for making me feel so respected and so welcome. I want to thank all the comics fans and pros who have expressed how thrilled they are with my good fortune. It was the best weekend of my 45-year career in the comics industry. Thank you.

I’ll be back tomorrow with the latest installment of “Rawhide Kid Wednesday.” Then, following that rooting-tooting excitement, I will share my comments on the Black Lightning premier episode.

Thanks for visiting the bloggy thing.