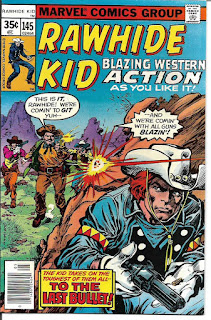 RESOLVED: The Rawhide Kid is my favorite western comics character and one of my favorite comics characters period.  This is why I’ve written over a hundred columns about him. Something about his short stature, but large courage, honor and fighting skills speaks to me.  After rereading the Kid’s earliest adventures when Marvel reprinted them in a pair of Marvel Masterworks and an Essential Rawhide Kid volume, I decide to reacquire every Rawhide Kid comic, reread them and write about them. We’ve reached the title’s extended twilight.  We’ve seen the last new Rawhide Kid story that will appear in the now-bimonthly reprint series. This is the 132nd installment of my “Rawhide Kid Wednesday” columns.

The Rawhide Kid #145 [May 1978] has a cover by Gene Colan (pencils) and Alan Weiss (inks). It’s an exciting cover, but it has nothing to do with the story inside the issue. Which might be a good thing as it turns out. 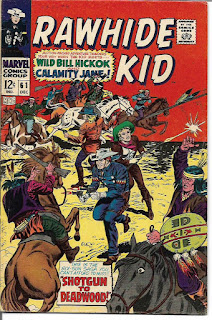 This issue reprints “Shotgun to Deadwood” from The Rawhide Kid #61 [December 1967]. The 17-page tale was written by Gary Friedrich, penciled by Dick Ayers and inked by Vince Colletta. Remarkably and unfortunately, this is the fourth time the story appeared in this series. It was reprinted earlier in Rawhide Kid #93 [November 1971) and Rawhide Kid #132 [March 1976].

I say “unfortunately” because the story is one of the most racist treatments of Native Americans in Marvel’s western comics. When I first discussed it on July 10, 2103, I wrote:

The story’s portrayal of Native Americans leaves a real bad taste in my mouth.  No demeaning cliche is ignored.  They are “redskins” and "savages."  They are working for Black Jack because he gives them “firewater.” They turn tail and run the moment they are faced with more than one gunfighter. Bad stuff.

You can read that entire column here. 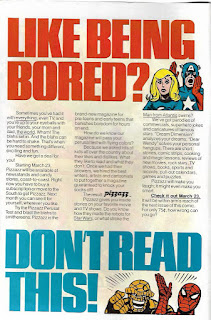 The inside front cover of this issue is an ad for the new Pizzazz magazine. Unlike the Pizzazz ad in the previous issue, I think this one might have come out of the Marvel bullpen. At the very least, it features a quartet of Marvel heroes.

The paid ads were the usual mix. The half-page Jack Davis werewolf as for Slim Jim meat snacks was back. The rest of the page was the Grit newspaper recruitment ad for salesmen to hawk the paper. This time out, it took the form of a badly-drawn “The Adventures of Gritboy” comic strip. 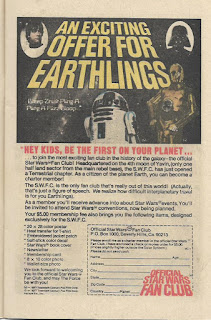 The Official Star Wars Fan Club has a full-page ad. The membership fee was five bucks, for which you got a poster, a transfer for a t-shirt, a jacket patch, a self-stick color decal, a Star Wars book cover, newsletter, membership card, an 8 by 10 color photo and also a wallet-size photo. The items were said to have been designed for the exclusive use of the fan club.

The usual three pages of classified ads are down to two-and-a-half pages this issue. There are 23 ads for mail-order dealers selling comic books, down just one from the previous issue. Also back is an ad for comics storage bags. The cost is three bucks per a hundred 3 mil bags.

Running through the other non-comics ads: Park-Rider skateboards; Universal muscle-building; Clark candy bars; a mail-order course in customizing cars and such; Sales Leadership Club soliciting folks to sell greeting cards for prizes or cash; 100 little dolls for $3; Fun Factory novelty items; Mike Marvel’s strong arms exercises; a secret agent spy-scope for your budding voyeur; and Olympic Sales Club looking for any suckers the Sales Leadership Club didn’t hook. The back cover ad was for Louisville Slugger collectors items like a bat ballpoint pen with a Johnny Bench autograph (fifty cents) and your choice of a bat pen and pencil set featuring autographs from either Reggie Jackson or Pete Rose ($1). 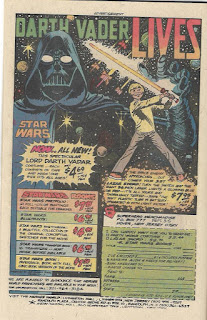 Superhero Merchandise aka Heroes World has its usual full-page ad, but this one is focused on Star Wars. A Darth Vader costume with cape and mask cost $5.44 (including shipping). A “lazar sword” was $8.70. A selection of Star Wars books were also offered, ranging in price from $2 to $8.45. The Heroes Worlds ads were produced by Joe Kubert and his Kubert School students. There seems to be a lot of Kubert himself in this ad.

“Stan Lee’s Soapbox” tells of a young Virginia Polytech University professor who remarked sadly that the column seemed to have moved from Stan talking about philosophy and such to just plugging Marvel products. Our fearless leader promises the column will once again be what it once was.

The Bullpen welcomed Dickie McKenzie as a new Marvel proofreader.

Artist Bob Hall was lauded for both his comics work and for “The Passion of Dracula,” a stage play. That was followed by a plug for Tomb of Dracula by Marv Wolfman, Gene Colan and Tom Palmer.

The page ended with a “Coming Soon” image of Ms. Marvel in her new costume. Which I seem to recall was designed by Dave Cockrum. 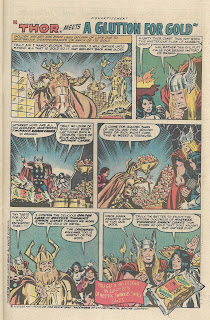 This month’s comic-book style Hostess ad was “Thor Meets A Glutton for Gold.” The villainous Gudrun the Golden wants all the gold in Asgard, but is distracted from his goal by “golden bars of rich, moist cake. AKA Twinkies. Based on my limited art detective skills, I think John Buscema penciled this one-page strip. 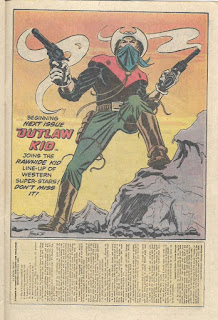 The last editorial page of this issue is a three-fourths of a page illustration of the Outlaw Kid by John Romita, Jr. Along with the drawing is the announcement that, beginning next issue, the Outlaw Kid will be joining the Rawhide Kid line-up of western super-stars. Four-page Outlaw Kid reprints will appear from issues #146 through #151, the final issue of the title.

That wraps up this installment of “Rawhide Kid Wednesday.” We have but six more issues to go until we reach the end of the trail for this title. Look for the next rip-roaring installment in just seven short days.

Tomorrow’s bloggy thing will be the first of several installments of “Black Lightning Beat.” With the Black Lightning TV show getting a star-studded premiere in Washington D.C. this week, with the show making its CW premiere on Tuesday, January 16, and with the great reviews the six-issue Black Lightning: Cold Dead Hands comic book series is receiving, I decided to devote the rest of this week and most of next week to Black Lightning. Besides, it’s all anyone asks me about of late.

Power up, my friends. I’ll see you tomorrow.

Posted by Tony Isabella at 8:55 AM