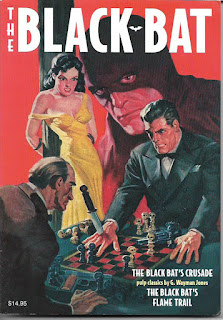 The Black Bat #4: The Black Bat’s Crusade and The Black Bat’s Flame Trail [$14.95; June 2016] has two book-length Black Bat adventures from the May and July 1940 editions of Black Book Detective. The first is written by the prolific Norman Daniels as house name “G. Wayman Jones” while the second has been attributed to the equally prolific Norvell W. Page. Here are the back cover blurbs for each of these novels.

Voodoo drums sound across the nation as a wave of mysterious murders fueled by ancient magic takes a terrifying toll.

The Black Bat’s Flame Trail leads to a sinister arsonist who wields a deadly torch of terror as New York tenements burn in a tale by The Spider’s Norvell Page!

In Will Murray’s “The Belfry” column, the author and pulp historian shares some thoughts on the possible roles future DC Comics editors Whitney Ellsworth and Mort Weisinger might have plated in the Page-attributed novel. He then outlines his reasons for naming Page as the author of The Black Bat’s Flame Trail. These historical essays are as intriguing as the novels themselves.

Editor and publisher Anthony Tollin again discusses the remarkable Kin Platt, who worked in animation, comic books and even newspaper strips. Platt drew and probably scripted the six-page comics story that appears in this volume.

“The Mask, Enemy of Corruption” is from Exciting Comics #4 [July 1940]. It features the Mask battling a Mask impersonator. For its six pages, the tale has quite a bit of action, drama, mayhem and murder. Note: this Sanctum Books edition has incorrect information as to where this story first appeared.

The front cover art of this volume was by Rafael DeSoto. The back cover art is by Rudolph Belarski, Rafael DeSoto and Kin Platt. The interior illustrations are by Harry Parkhurst and V.E. Pyles.

Posted by Tony Isabella at 1:00 PM