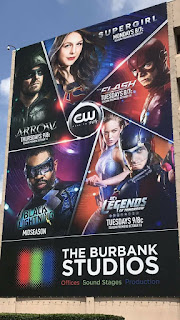 Last month, I wrote about being brought out to Burbank to meet and meet with Salim Akil, show runner, writer, director and producer of the Black Lightning TV series and the writers of that forthcoming smash hit. Hey, I have faith in Jefferson Pierce. Truth be told, I was so excited and nervous about that visit that I fear I may have come off a little crazy and didn’t do the best job reporting on one of the most exciting days of my life. With your kind indulgence, I want to give it another shot.

Note. In the interest of trying to keep this to one bloggy thing, I’m going to forego retelling you about my flight to Los Angeles, the weird and wonderful Key Hotel (where I stayed the night before my meeting), my evening with Mark Evanier, my subsequent visit to the DC Comics offices and my return flight. I’ll backtrack to those in some near-future bloggy thing.

Outside of having to be checked in at the entrance gate and at the main Burbank Studios building, there wasn’t anything about these buildings that screamed “Hollywood” to me. On my way to the Black Lightning offices, I saw a couple workers moving things that might have been parts of sets, but, if that’s what those were, it wasn’t obvious to me.

Jamon Brown, assistant to show runners Salim and Mara Brock Akil, met me at the main building and walked me to the Black Lightning offices. Jamon took great care of me the entire time I was in Los Angeles, making sure I had transportation from and to the airport and their offices, arranging for me to visit the DC Comics offices (about a block from the studios) and keeping me from getting lost. He also wants to write and, more importantly, he writes every day. I have no doubt I’ll see his name in the credits one day.

In the hallway outside the Black Lightning offices, I didn’t spot anything proclaiming that’s what they were. In fact, I don’t think I saw any signage outside any of the other offices. I didn’t learn until later that Mike Carlin, one of my editors on my second Black Lightning series, had his office down the hall from where I was. Had I known that, I would have stuck my head in to say “hi.”

Jamon walked me into the empty writers room. At the risk of being blasphemous, it was like walking into holy ground for me. The first thing I saw was an enormous white board filled with rough notes on the thirteen episodes that will comprise the first season of Black Lightning. I let out a gasp when I saw how much of me was up there on that white board. Across from the white board, there were drawings and photos of some characters who will be appearing on the series and a smaller board with names of characters who might appear on the series. I saw quite a few of my creations represented with some of the images taken from comic books drawn by Trevor Von Eeden and other artists.

Note. I want to be clear about something from the get-go. While I saw a lot of me in that room, I also saw a lot of ideas from Salim and the other writers. I’m honored they are using some of what I’ve done, but I’m thrilled by the great ideas they are contributing to Black Lightning. I can’t give you specifics, but Salim’s version of a classic DC Comics villain (not one I created) is breathtaking in concept. I can’t wait to see that villain on the show.

The writers and I sat at a long table in the middle of that room. Mara wasn’t there because she was at an out-of-state event with one of her and Salim’s sons. The Black Lightning team: Charles Holland, Jan Nash, Pat Charles, Adam Giaudrone, Lamont Magee, Keli Goff, Asheleigh Conley, Kamaria Robinson, Melora Rivera and Jake Waller. If there had been time, I would have taken photos of all of them to share with you.

In front of each seat was a print out of character and story flow. I deliberately didn’t do more than glance at it because I was very conscious of accidentally revealing more than I should and because I wasn’t there to go over what they had written but to answer their questions about what I had written.

Note. Early on in my new relationship with DC, before we had even started work on our overall agreement, I had been asked to write a paper on “Black Lightning Core Value.” That was one of the starting points for this series, but it was not a bible in any sense of the word. It wasn’t carved in stone. It was just a place to start. In the future, after the show debuts, I’ll share that paper with you here or in a non-fiction book I’m writing.

I was amazed at the questions. I was asked about comic books I had written forty years ago. I was asked about back story that I never actually put into a comic-book script. We discussed how that back story might be adapted to 2017. We talked about Jefferson Pierce’s character. We talked about my impressions of what it is like to be a black man in America in 2017, and some of the writers offered me much greater insights into that part of their worlds.

I can’t and won’t discuss specific questions and answers. You will get no spoilers from me. What you will get when the show makes its debut is a TV series based on a comic-book creation that takes that creation to a new and more realistic level.

I don’t have any official role with this series beyond that I will likely be its number-one cheerleader. I’m there to answer questions or do whatever else they ask of me. Because, official role or not, the importance of this character demands that everyone involved in it, even at a distance, gives it their very best efforts.

I hope I didn’t come off as a pompous ass, but I told these writers the question should never ever be “What would Tony Isabella do?” It should always be “What would Jefferson Pierce do?”

Note. One of the two questions everyone asks me at conventions is if I’ll be writing for the series. I’ve been telling fans I should have learned enough about screenwriting to pitch a script for the  show’s third season. Some of the writers thought I should shoot for the second season. I’m thankful for their confidence in me.

Note. I’ve also been telling people I don’t know how to write for  TV or movies. One of my dearest and oldest friends has beseeched me to stop saying that. So, from this moment on, if anyone asks me to write a movie or an episode of a TV show, I’m going to answer that I would happy to do so. Have your people call my people.

Note. Remind me to get myself some people.

I spent about three hours with the Black Lightning writers. Salim told me it was a very productive session. I was glad to hear that because I was afraid I spent too much time telling the writers some of my comics industry and lifetime war stories. A couple of them want me to write my memoirs. I’m not quite ready for that.

Salim brought me into his office. On one of his walls was an even bigger white board showing the show’s production schedule. I might as well have tried to read Sanskrit. The main thing I learned from it is...television production is really complicated. Probably just a notch below rocket science. I’m impressed by how well Salim can juggle the business, creative and production operations of running this series.

Salim showed me the presentation piece they had done for the CW to get the show picked up. It ran a little shy of twenty minutes and is the trailer plus additional material. The scene you’ve seen of Jefferson Pierce talking to his two daughters at the roller rink is longer and really rings true. As I told Cress Williams, the scene is what cemented my belief that he is the absolute right actor to be playing Jefferson Pierce.

As I keep reminding fans and readers, I’m not at liberty to write about everything I know about this series or, for that matter, the forthcoming Black Lightning comic-book series. I knew the reports the Black Lightning pilot would be presented at Comic-Con were 100% wrong because I knew no pilot had been filmed. But I couldn’t say anything about that until after the Black Lightning presentation at the convention.

Salim and I talked about Tobias Whale. I knew some of the actors he was auditioning for the character, but I couldn’t/wouldn’t mention any names until he and Mara hired the rapper Krondon for the role.

The second of two questions everyone asks me is if I'll be doing a cameo appearance on the series. This is a concept that fills me with fear. When a particularly nice photo of Jefferson, Lynn and their daughters sitting on a couch in their home hit the Internet, I quipped I’d be playing their wacky next door neighbor. At least one reporter thought I was serious and almost put it in a story.

Salim kidded I could play Peter Gambi, but I wasn’t going to repeat that silly suggestion until the great James Remar was cast in the role. Now that everyone knows Gambi will be in the show, I’ll tell you I answered several questions about the character during my time in the writers room.

Anyway, at this time, no one has actually asked me to make a cameo appearance in the show. If it happens, it happens. If it doesn’t, I’m hoping it’s because they got Stan Lee instead.

Salim also gave me the very cool Black Lightning hat you have seen me wearing in photos from the recent NEO Comic Con. Everyone wants one of those hats, but they aren’t commercially available at this time. I hope that changes.

One last note. I will no longer refer to Black Lightning: Cold Dead Hands as a mini-series. It’s a six-issue series, but, to me, there is nothing “mini” about it. I have ideas for stories beyond the one I’m telling in those six issues and, if the fates are kind, I will be writing new Black Lightning stories until the day they pry my keyboard from my own cold dead hands. My passion for this character has not diminished with the passage of time.

Posted by Tony Isabella at 8:00 PM