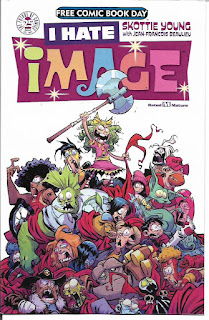 On a scale of zero to ten, each of those criteria is worth up to three points. Tony awards the elusive tenth point when he deems a FCBD offering particularly worthy.
I Hate Image [Image Comics] has what appears to be a new 22-page I Hate Fairyland story by writer/artist Skottie Young with colorist Jean-Francose Beaulieu. Protagonist Gert is an battleaxe-wielding moppet who is slaughtering her way across the Image Comics titles in a quest to escape from Fairyland.

QUALITY: Pretty good. The over-the-top belligerence and brutality  got tiresome, but the snarky comments on various Image characters and titles made me chuckle.

ACCESSIBILITY: Needed work. I had to wait for a house ad to figure out what Gert’s name and deal was. There was more than enough room on the inside front cover credits page to have included some brief background on the series.

SALESMANSHIP: If you liked the new story, a house ad lets you know what I Hate Fairyland trades are available. There are three other Image house ads, but they are so general as to be ineffective. This free comic book missed so many opportunities.

SCORE: Six out of ten points. 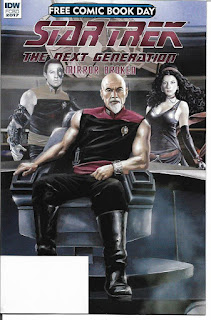 Star Trek The Next Generation: Mirror Broken #0 [IDW] leads with a 12-page story and five additional pages of behind-the-scenes stuff introducing the Next Generation component of the Mirror Universe seen in various Star Trek TV episodes and comic books. Written by David Tipton and Scott Tipton with art by J.K. Woodward, the story focuses on the character Barclay. Also included in this FCBD issue are excerpts from Star Trek: Boldly Go, Star Trek/Green Lantern: Stranger Worlds and Star Trek: Waypoint.
QUALITY: High. The lead feature has me wanting to see more. The Waypoint excerpt intrigues me, but there wasn't enough of it to hook me. I wasn’t bowled over by the other two excerpts.

ACCESSIBILITY: Mostly good. The lead feature is easy to follow. We get decent background on the other features.

SALESMANSHIP: Very good. Each of the four features includes decent information on where to find more of the same.

SCORE: Eight out of ten points. 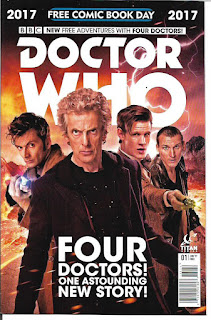 Doctor Who [Titan] is one of the most delightful of the Free Comic Book Day giveaways I’ve read. It features the 16-page, done-in-one “The Promise” by Alex Paknadel and artists Mariano Laclaustra, Pier Brito and Nico Selma. It’s clever and thoughtful tale that manages to include four different incarnations of the Doctor.

QUALITY: Top of the line. When I finally get around to reading the dozens of Doctor Who comic books awaiting my attention, I’ll look for Paknadel’s name in the credits.

ACCESSIBILITY: Between the inside front cover copy and information smoothly inserted into the story, I believe any new reader will be able to enjoy this story.

SALESMANSHIP: A double-page house ads direct readers to the ongoing Doctor Who titles. There is also an ad for the BBC Doctor Who shop and Titan’s Sherlock and Torchwood collections. 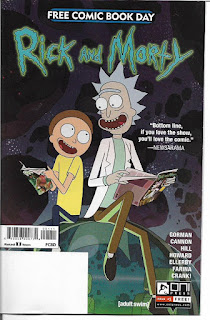 Via Wikipedia, Rick and Morty [Oni Press] is an “American adult animated science-fiction sitcom created by Justin Roiland and Dan Harmon for Cartoon Network's late-night Adult Swim.” The issue has an 18-page excerpt from “The Wubba Lubba Dub Dub of Wall Street” by Zac Gorman and artist C.J. Cannon and a 4-page excerpt from “Pocket Like You Stole It” by Tini Howard and artist Marc Ellerby. On the cover, a Newsarama pull quote proclaims “Bottom line, if you love the show, you’ll love the comic.” That wasn’t much comfort to me. I’ve never seen the show.

QUALITY: Although this isn’t a comic book I enjoyed, I thought the writing and art of the lead story were good and suited each other. I didn’t think the second story was nearly as good.

ACCESSIBILITY: Poor, based on my position that Free Comic Book Day issues should be accessible to readers who have never seen or read the series. I had to go to Wikipedia to learn “The series follows the misadventures of cynical mad scientist, Rick Sanchez, and his fretful, easily influenced grandson, Morty Smith, who split their time between domestic family life and interdimensional adventures.”

SALESMANSHIP: Two house ads point readers who liked this comic book to where they can find more of the same. In addition, Oni promoted Zander Cannon’s terrific Kaijumax and several other titles. That’s the way to go.

SCORE: Five out of ten points. 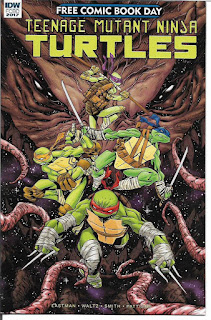 Teenage Mutant Ninja Turtles [IDW] presents a 20-page TMNT story by Kevin Eastman, Bobby Curnow, Tom Waltz and Cory Smith. It appears to be the first part of an arc running in the ongoing TMNT series and a spin-off Dimension X one-shot or series.

QUALITY: Okay. The story is pretty much by the numbers. There’s the equivalent of a sewer Danger Room session, a tedious recapping of a bunch of old villains, a set-up to the trial of one villain and a creature sent to keep witnesses from testifying. It’s a readable story but doesn’t rise above that in any way.

ACCESSIBILITY: No background information outside of the villainous roll call, but the Turtles are so well and widely known that I can cut IDW some slack here.

SCORE: Five-and-a-half out of ten points. 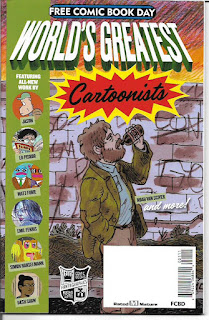 World’s Greatest Cartoonists [Fantagraphics] features 50+ pages of new material by some of the world’s greatest cartoonists and some whom this reader wouldn’t elevate to that category. This is comics and not an exact science. Still, I can’t help but be impressed by the publisher offering work by 16 of its authors in a free comic. Fantagraphics is committed to its mission of publishing diverse and intriguing creators.

QUALITY: I enjoyed some of the contributions quite a bit. I didn’t care for others. Some readers will have the opposite reactions to them. My preference is for more straightforward storytelling with witty dialogue. Some readers will like the artsy-fartsy stuff more. That’s the beauty and challenge of an anthology.

ACCESSIBILITY: This comic is rated “M” for “Mature” and I suspect most readers will be able to follow at least some of these comics.

SALESMANSHIP: Following the comics, there’s a three page section on where you can find more work by these cartoonists. That’s a great idea. The back cover shows two dozen other Fantagraphics books and comics. So...high marks in this category.

SCORE: Eught out of ten points.

That’s all for now. I’m taking a couple days off from blogging to finish another project, but I’ll be back on Monday with more stuff. See you then.

Posted by Tony Isabella at 8:33 AM