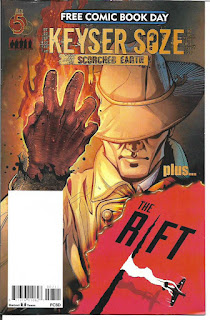 I came to Keyser Soze: Scorched Earth/The Rift [Red 5 Comics] cold. While I knew of The Usual Suspects, I’ve never seen the 1995 film. I should do so one of these days. However, the inside front cover of this Free Comic Book Day issue offers new readers introductory information on the two title features. I’ll share that information with you here.

“I am sure you’ve heard a number of tall tales, myths and legends about Mr. Soze. I can assure you, gentleman, most of them are true.” - Kobayashi

In 1986, Dan Metzheiser - who will one day consult with Agent Baer in an memorable case - is a Justice Department agent with an eye for patterns. For years, he’s been tracking the trace of a whisper of the name Keyser Soze as an obsessive hobby. At least he calls it a hobby.

Presented by Academy Award nominee Jeremy Renner, The Rift tells the story of a single mother and her son whose lives change forever after witnessing a WWII fighter pilot from 1941 crash-land in present-day Kansas. They find themselves drawn into the work of Section 47, a secret government organization responsible for responding to Rifts that open in space and time.
QUALITY: The Keyser Soze excerpt is written by Paul Ens with art by Livia Pastore. The Rift excerpt is by Don Handfield and Richard Rayner with art by Leno Carvalno. The writing and art on both are very good. They each do a good job of introducing the stories and giving the readers reason to explore the two series further. If I have any complaint here, it’s that, ironically, the introductions on the inside front cover pretty much cover the exact same ground as the excerpts.

ACCESSIBILITY: Excellent. No reader should have a problem following these two excerpts.

SALESMANSHIP: Also excellent. The excerpts are good lead-ins to the two titles. Two full-page ads for other titles, while not offering much detail, are intriguing. Another full-page advertising several collections of Red 5 Media titles has nice hooks to all of those collections. 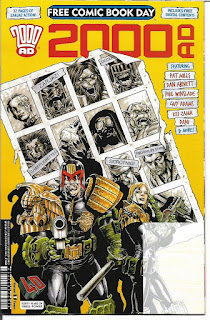 2000 AD Free Comic Book Day Prog 2017 [Rebellion] is an anthology featuring five stories from the British weekly. The line-up: Judge Dredd, Blackblood (a solo story of one of the ABC Warriors robots); Hope...for the Future (a private eye in an alternate universe where World War II was won by Magic; Judge Anderson (Psi-Division judge) and Dreams of Deadworld, a planet similar to Earth but in another dimension where the Dark Judges have taken hold).

QUALITY: 2000 AD is a mixed bag of late. The Judge Dredd adventure is decent, but lacking. Hope...for the Future has a great premise. The other three stories are so-so at best.

ACCESSIBILITY: Better than many FCBD comic books, but not as good as it should have been.

SALESMANSHIP: This free comic book presents a fair sampling of the weekly title. If you like what you see here, you’ll probably like the ongoing weeklies.

RELATED NOTE: After returning to 2000 AD and Judge Dredd Megazine for a few months, I have dropped both titles from my “pull list.” It’s the writing, as in “The writing in 2000 AD isn’t anywhere near as good as it once was. 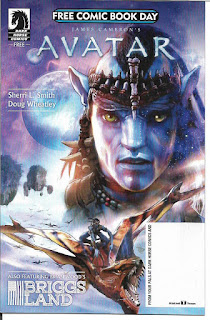 James Cameron’s Avatar [Dark Horse] features two stories, the first being a Sherri L. Smith (script) and Doug Wheatley (art) tale from the title movie. The second story is a Briggs Land episode by Brian Wood (creator/script) and Werther Dell’Edera (art). Briggs Land is about a “modern secessionist movement and the family behind it.” I am reminded that I really need to see Avatar one of these days - I have neglected my non-cheesy horror/monster movie viewing - and a wee bit intrigued by Briggs Land. However, given the apparent lack of black or other characters of color, I’m less likely to check out more Briggs Land comics.

QUALITY: Both stories are well written and well drawn.

ACCESSIBILITY: Decent. Avatar is such a part of the popular culture world that readers know the basics even if they haven’t seen the movie. Briggs Land is accessible, but doesn’t provide enough back story or insight into the characters.

SALESMANSHIP: Excellent. Besides the two comics stories, the issue has good house ads for Dark Horse’s American Gods comics, the trio of titles created by Joss Whedon, the Hellboy titles and the latest Predator series. 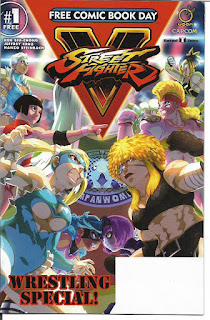 Street Fighter V: Wrestling Special [Udon/Capcom] has two stories of silly wrestling based on some sort of video games. This is not a comic book for Tony Isabella, who is not fond of any wrestling - save for the Netflix series GLOW - and not fond of any video games whatsoever. As my late friend and mentor Don Thompson would often say, “If you like this kind of comic, you’ll like this comic.” He was so much more congenial than me.

SALESMANSHIP: Very good. If you, indeed, like this kind of comic, this giveaway alerts you to others of its ilk. 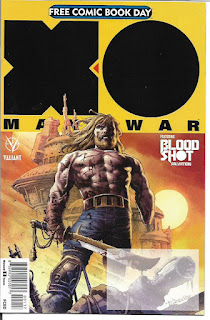 Valiant: X-O Manowar was disappointing because it wasn’t anywhere near as accessible and interesting as the actual Valiant comics. It has a prologue of the new X-O Manowar series, a preview of Secret Weapons #1, a prologue to Bloodshot: Salvation and several pin-ups showing large groupings of Valiant characters.

QUALITY: The writing and art are up to Valiant’s high standards, but the story fragments are not as enticing as they should’ve been.

FINAL SCORE: Four out of ten points. It’s a score that doesn’t even remotely reflect how good Valiant’s titles are. 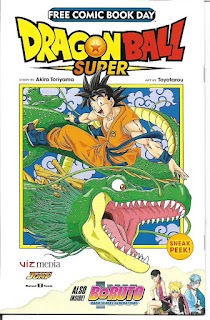 Dragon Ball Super [Viz Media] features uninteresting snippets from two manga series that are mostly about fighting with very tedious segments talking about the fighting. This is another one of those “If you like this sort of thing” giveaways. Me? I stopped buying Shonen Jump when it became little more than manga based on battle anime series.

ACCESSIBILITY: Poor. You get more information from an ad for these two series than from the stories themselves.

FINAL SCORE: One out of ten points.

While you’re waiting for next Friday, you can look forward to two “Burbank Bookends” columns on what happened before and after that memorable day I spent with the Black Lightning writers. Then, come Monday, you’ll get the first of a series of columns in which I do my best to answer your Black Lightning questions.

But...it won’t be all Black Lightning in the bloggy thing. I have more convention and trip reports coming your way. I have the weekly Rawhide Kid Wednesday installments. I have the return of a number of our ongoing series-within-the-bloggy. And I have more news and views and reviews on the worlds of comics, entertainment and even the real world.

The bloggy thing doesn’t get much in the way of props from comics news sites, but a few thousand readers visit here every day. They must know something those news sites don’t.

Thanks for dropping by. I’ll be back tomorrow with more stuff.

Posted by Tony Isabella at 1:58 PM