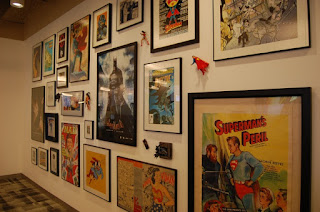 In early July, DC Comics/Entertainment flew me out to Los Angeles to meet with the writers of the Black Lightning TV series. I wrote about that meeting last Thursday. Yesterday, I backtracked to tell you about the day before that meeting. Today, I’m writing about my day after the meeting and my flights home. There are trip reports and then there are obsessive trip reports. You’ve probably figured out which kind this is.

My original itinerary called for me to be with the Black Lightning writers until seven p.m. and then be driven to the airport for my  10:25 p.m. departing flight. But...we covered so much ground so quickly that, even with a lunch break, we were finished with hours to spare. So Jamon Brown, the show runners’ assistant, made a call to the DC Comics offices and arranged for some nice folks to give me a tour of the company’s Burbank digs.

Holy elegance, Batman! Were those DC offices swanky! I’m not gonna give any too many details - have to be cautious of costumed crooks who would love to get their mitts on some on the treasures on open display - but spending a night in those offices would easily match spending a night in Cinderella’s Castle at Disneyland.

The foyer was big and bright. There were costumes from DC shows and movies on display in the lobby. There was a chessboard with pieces based on super-heroes and super-villains. The walls were adorned with museum-quality artwork and memorabilia and prints and photos and so much coolness you’d almost expect to see your breath as you walked by them.

There were magazine and spinner racks filled with comics throughout the officers...and I was told to take anything I wanted. I took a copy of the Colonel Sanders/Green Lantern comic book that would be given away at San Diego’s Comic-Con International later that month.

There was a room filled with hardcovers and trade paperbacks and, again, I was told to take anything I liked. I wished I had brought a second suitcase.

All DC licensed products come to these offices for final approval. When they showed me their secret room where all these products go after approval, I wished I had brought a dozen suitcases. It was DC clothing and toy heaven. I took a child’s Wonder Woman costume for my sort of niece Gabby, an exclusive Funko Catwoman figure for my “other daughter” Giselle and a Matchbox Batmobile for myself. I put the car on the wall, but my cat Simba has been eyeing it. I’m thinking of changing her name to “Selina.”

Because the offices operate on Friday flex time, there weren’t many people still at the offices. I was given the tour by a pair of nice folks from licensing and marketing, but I was also able to have my first face-to-face meeting with Jim Chadwick, editor of the coming Black Lightning series, Cold Dead Hands. It was a brief meeting and we mostly talked about covers and how he had sent me some helpful notes that broke my mental logjam over the vital third issue of the series. It was great to put a face to the emails.

The handful of people I met during my visit to the DC offices all seemed really happy to be working there. It’s a great atmosphere, a decided improvement over the Mordor I used to imagine was the DC offices under the company’s previous management. I’m hoping this is the first of many future visits and that no one looks askance when I bring a couple of empty suitcases with me.

When I returned to the Black Lightning offices, I asked Jamon if I could be picked up early by the car service. I didn’t want the good folks to feel they had to entertain me, so I figured I’d just hang out at the airport for a few hours.

The driver asked me if it was okay if we took a more scenic route to the airport as the LA highways were crazy crowded. He described them as parking lots. Since I had hours to kill - literally - I was okay with that. He pointed out some interesting sites and we had a pleasant conversation.

Things were very hectic at the airport. The TSA agents were a surly bunch, not at all up to the standards I usually find from agents at other airports. Once I got through to the gates, I found each and every gate packed with people. I was hoping to relax until it was time to board my flight. This would have been the exact opposite of  relaxing.

I walked over to Delta Sky Club to ask about the cost of a yearly membership. It was in the neighborhood of $500, which didn’t seem practical for 2017. That’s when the helpful agent told me I could buy a day pass to the club for under $60. That struck me as a good deal to be able to relax in comfort for several hours...and an even better deal when I saw what was available.

There was free food and enough choice to make it both filling and enjoyable. There were free drinks, including alcoholic beverages. There were tasty desserts. There was a variety of free newspapers and magazines. There was lots of comfortable seating and places to plug in phones and computers and other devices. The restrooms were clean. There were shower rooms and, if I hadn’t checked my luggage, I would’ve taken one. I slept for a few hours. Had I requested it, one of the club attendants would have alerted me when my flight was boarding. Next year, if I’m flying as much as I expect to fly, I’m going to spring for that annual membership.

I was on an overnight flight from Los Angeles to Atlanta, which is a favorite airport of mine. Yeah, I know it’s huge, but it has so many great restaurants and shops. I was again flying first-class, which, as you may recall, I have proclaimed does not suck even a little bit. The Delta flight crew was friendly and helpful. I even chatted with the pilot for a few minutes.

We arrived at Atlanta around 5:45 a.m. with my flight to the Canton Akron airport due to depart three hours later. As my pass to the Delta Air Club had expired at midnight, I hunkered down in a seat at my gate and made notes about my hectic few days.

The flight left on time, arriving at Canton/Akron around 10:30 a.m. Barb picked me up at the airport and drove me home. Where I was way too excited to sleep or work.

The most important thing about this trip was...I’m more confident than ever Salim and Mara and their team are going to make a great Black Lightning series. The writers are dedicated and smart. The casting has been wonderful. The fan support has been nothing short of incredible.

The second most important thing...the DC Comics of which I’ve been so critical in the past no longer exists. I’m not going to say the company does everything right, but it’s a much better company than it was at the height of my problems with it. I really am thrilled to be associated with DC again.

The third most important thing...Delta Air Lines has really upped its game since the last time I flew with them. If I have a choice  in the future, Delta will be my go-to airline.

I’m running behind in writing and posting these bloggy things, but I hope to be caught up by the end of the week. Next up: my answers to a bunch of your Black Lightning questions. That’ll be followed by a new “Citizen Tony” column, another installment of “Rawhide Kid Wednesday”, another “July 1963 column, and the finale of my series of reviews of this year’s Free Comic Book Day issues. Beyond that, you’ll be seeing my G-Fest 2017 report, my NEO Comic-Con report and the usual mix of news, views and reviews.