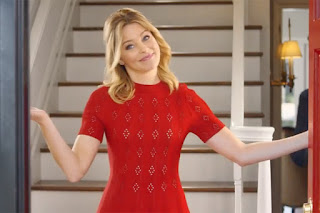 July was, like most months, a mix of the good and the bad. I spent a wonderful day in Burbank visiting with the writers of the forthcoming Black Lightning television series, followed by a tour of the beautiful DC Comics offices. My son Ed and I had a monstrously terrific time at G-Fest XXIII, the convention for fans of Godzilla and other kaiju. On the down side, health issues slowed me down and, of course, the Dumpster President and his fellow right-wing vermin are still working hard to make America horrible.

That’s life. I embrace the joys and do what I can to fight the very real evil. What helps in that ongoing struggle is to take a moment each day to remember the people and things that make the struggle worthwhile. As posted on Facebook and Twitter, here are the “Things That Make Me Happy” from July...

July 1: Elizabeth Banks. She makes me smile every time I see her, especially in her Realtor.com ads.

July 3: The thing I can’t tell you about until next week. [This was my trip to Burbank to visit with the Black Lightning writers. I’ll be writing about this again soon, but the two biggest thrills for me were seeing how much of me will be in the show and how much the writers are adding to that. If the day comes when I can no longer write Black Lightning for the comic books, I think the next great Black Lightning comic-book writer might have been in that room.]

July 4: The Resistence. I admire and support all those who oppose the Dumpster President and the villainous GOP.

July 5: The other thing I can’t tell you about for another month or two. [I still have to remain a tease about this. It’s actually two things, but the word might already be out on them.]

July 6: Flying first class. I’m a nervous flier and having a little more room and care helps me cope.

July 7: The Ace Hotel in downtown Los Angeles. It’s weird in a very good way. Would like to explore it further. [The only drawback is that it’s not near anywhere I’d likely be going to in Los Angeles. I’d still consider staying there again.] 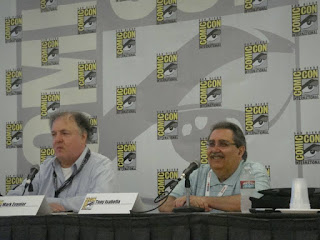 July 8: My fifty years of friendship with Mark Evanier. Anyone who doesn’t like Mark has a screw loose.

July 9: The DC Entertainment offices. If they rented rooms, I would stay there on my next visit.

July 10: Delta Sky Club. My one-day pass was worth the cost for the food, drink and relaxation I got.

July 11: Dominic’s. My new favorite pizza place in Medina. I want to try other items on their menu soon.

July 12: “Walk Through the Fire” from the Buffy the Vampire Slayer musical episode. Rousing, sad and character defining all at once. Always brings a lump to my throat. 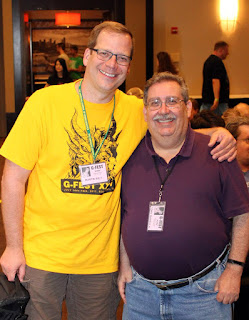 July 14: Pam and Martin Arlt. If it wasn’t for them, I would have kept putting off attending G-Fest. [Next year, I need a photo with both Martin and Pam.]

July 15: J.D. Lees and the G-Fest directors. They make me and every one else feel like they are an important part of this most wondrous of kaiju conventions.

July 16: G-Fest fans. So wonderful to see whole families enjoying the event together.

July 17: The Syfy Monsters panel I did at G-Fest. It was more fun and more successful than I could have imagined.

July 18: Artist extraordinaire Mark Maddox, just one of the nicest guys and best artists I know.

July 19: Holy carp! Black Lightning is on the cover of TV Guide! I have no words.

July 20: Holy carp! Black Lightning is on San Diego Comic-Con bags! I still have no words. 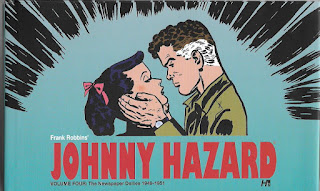 July 21: Johnny Hazard by Frank Robbins. I’m on volume four of the daily strips and loving them.

July 23: So much wonderful Comic-Con interest in and love for the  Black Lightning TV show.

July 25: Those DC/Looney Tunes specials. They are both strange and hilarious. I’m loving them!

July 26: Seeing my name in the TV Guide Comic-Con issue. Something else I never would have expected a few years ago.

July 27: NBC’s Midnight, Texas. The pilot was both entertaining and intriguing. I’m in. 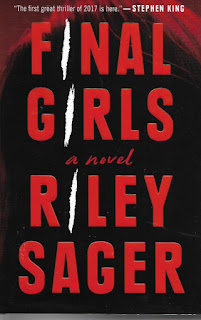 July 30: I’ll be returning to New York City on August 8 through the 11. Hotel and flight are booked.

August will be a crazy busy month, but I hope to post a new bloggy thing every day I’m not on the road. Look for more on my quick trip to Burbank, my G-Fest fun and an updated convention schedule in the next couple of weeks. I’ll be back tomorrow with a new installment of “Rawhide Kid Wednesday!” See you then.