GET MORE TONY: THE GARFIELD SHOW #7 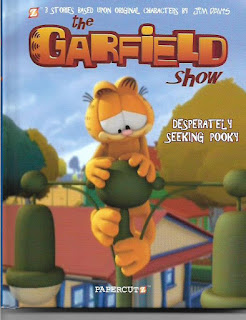 With script restoration and additional dialogue by me, The Garfield Show Vol 7: Desperately Seeking Pooky [Papercutz; $12.99] is due to be released on September 5. Confusing as it may sound, this latest volume is both bigger and smaller than its predecessors. I’ll get to that in a moment.

First, the back cover copy:

DON’T CRY OVER SPILLED LASAGNA!
That’s Garfield’s Favorite Seventh Lunch
Everyone loses things sometimes. But right now, it seems like “sometimes” means “all the time” for Garfield. In “High Scale,” Garfield receives a terrible ultimatum from the vet: lose two pounds in a week or get sent to Maggie’s Cat Spa, where lunch is a single pea. Then, in “Freaky Monday,” Garfield gets a dose of karmic justice as he and Odie switch bodies and he’s forced to watch the helpless pup-turned-cat eat the cheesy treat that rightfully belongs to him. Finally, in “Desperately Seeking Pooky,” tiny but terrible forces conspire to cost Garfield his favorite food and his best friend!
Sidebar. I worked on all three of these stories and, until I read this back cover copy, it never occurred to me that they shared that common theme. Sheesh!

This volume of The Garfield Show has more pages than the previous ones. The raw material for these stories [screen captures from the show turned into comic-book stories] is now coming from China and not France. The Chinese are not abridging the stories in the manner of the French, who would sometimes reduce an episode to a mere five pages. So each of the stories is a full 23 pages in length, adding up to 69 pages of feline fun. That’s the bigger.

The smaller? This volume measures 5 x 6.5 inches. That concerned me when I first saw a copy, but, on looking through the book, it’s as easy to read as ever. Plus, the more compact size makes it perfect as a stocking stuffer or other small gift.

Papercutz gives me a lot of room to exercise my own sensibilities as I translate the stories from their original televised scripts to the comics format. I have a ball working on Garfield and I’d like to think that fun is contagious.

Kudos to all the fine people who make this fun possible. Editor-in-chief Jim Salicrup hired me. The show itself is written, produced and voice-directed by Mark Evanier, my dear friend of nearly half a century. Letterers Tom Orzechowski and Wilson Ramos Jr do a terrific job making my copy look good. Dawn Guzzo is the production coordinator. New editor Alexander Lu came up with a schedule I could handle and supported my efforts. The bottom line is that I’m proud of this book.

Do yourself (and us) a favor and check it out.

The bloggy thing will be on hiatus until August 14. I’m heading to New York tomorrow for a special screening of Marvel’s new Defenders TV series. The eight-episode show will be available on Netflix starting August 18.

When I return, I’ll have all sorts of cool stuff for you. More on Black Lightning. More Sharknado Week reviews. Reports from G-Fest. I’ve got so much material I could write two bloggy things a day and not cover it all.

Be happy and safe while I’m gone. See you soon.

Posted by Tony Isabella at 7:18 AM