BURBANK BOOKENDS (PART ONE OF TWO) 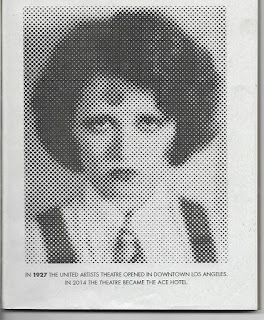 In 1927, the United Artists Theatre opened in downtown Los Angeles. In 2014, the theatre became the Ace Hotel.

A few days ago, I wrote about my visit to the writers room of the Black Lightning TV series. Today and tomorrow, I’ll be telling you about the rest of that West Coast trip because, as you’ve learned from following the bloggy thing these past few years, I am nothing if not obsessive.

On Thursday morning, my son Ed drove me to the Canton/Akron airport to catch a flight to Detroit and then Los Angeles. “CAK” is a small airport, but, in many ways, I prefer it to the Cleveland airport. My plane to Detroit was a puddle jumpers with a row of single seats and a row of double seats. I had a single seat, which I prefer when traveling alone. Even when I’m not traveling alone, I request, at least, an aisle seat. I’m a nervous flier at the best of times and feel a bit claustrophobic if I’m not on the aisle.

I was flying Delta this trip and, though I’ve had problems with the airline in the past, I have nothing but good things to say about it on these flights. The Delta folks on the ground were friendly and informative. The Delta folks in the air were just as friendly and unfailingly helpful. Of course, since I was flying first class, my usual anxieties weren’t as much of an issue.

At the Los Angeles airport, I was met by a car service driver with a sign reading “Mr. Isabella.” Just like in the movies. While the reasons for doing this are obvious, I still giggled at the sight. My life is so wonderfully strange these days.

I was driven to the Ace Hotel at 928 South Broadway. It is a very weird yet wonderful hotel that, though recently refurbished, is a monument to classic Hollywood. Much of the surrounding area is also being refurbished, which means a lot of construction, quite a few theaters and other entertainment venues, and, as near as I could determine from my brief stay, not a lot of great places to grab a meal. 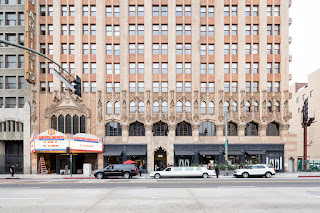 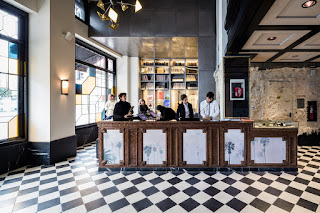 The Ace has no ornate front. When you walk into the place, it gives off an ambience of young people coming to Hollywood in the hope of achieving stardom. From my handful on conversations with employees and others, I learned some of the employees live and work there as they pursue their other dreams...and that many guests come and stay for days/weeks/months when they have jobs in the city. I wished I’d been able to stay longer and explore more of the place. Just being in my room was an adventure. 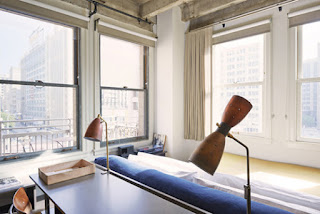 I was booked into a “medium with terrace” room. It had a king bed, ornate sink and bath tub, a small desk, a flat screen TV, a fully-stocked minibar, a snack/convenience items tray filled with weird  stuff at exorbitant prices and a toilet room whose door so matched the wall that, at first, I wasn’t sure the room had a toilet. I’m glad I figured it out before calling the front desk for directions. When I told the toilet story to Mark Evanier later that evening, he improvised a quick sketch...

TONY: This is Mr. Isabella in room 666. Could you tell me where the toilet is in this room?

DESK: Toilet? Oh, did you want one of the deluxe rooms?

On the door of the toilet and the only thing that distinguished it from the wall was a small dot-pattern photo of Franz Kafka by Mike Mills. Every room at the Ace has a similar photo of some figure or event from 1927, meant to “conceptualize” the history of the place. The image of Clara Bow from the top of today’s bloggy thing is one of these photos. It’s the cover of a booklet I’ll tell you about in a few more paragraphs.

A few other things about the room... 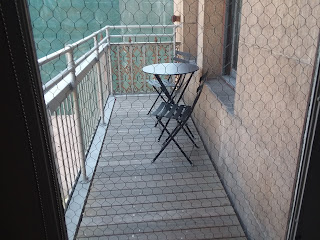 The terrace was small, but quite comfortable. I spent a few moments that night just sitting out there and breathing in Los Angeles and then a few more moments coughing up Los Angeles air. 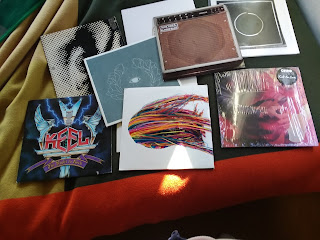 Each room had either a working guitar or, in my case, a turntable with a stack of record albums. I didn’t play any of the albums, but I thought that was a very cool feature.

The snack tray had one free item: condoms. These were of no use to me during my stay, but I thought it was a nice gesture.

I bought one overpriced item from the snack tray. It was 7.5 by 6-inch booklet featuring all of the dot-pattern photos by Mike Mills and a multitude of facts and anecdotes about the era in which this building was constructed.

I made some calls to let my loved ones back home know I was safe at the hotel and to let the Black Lightning writers room know I would be ready for my morning pick-up. Then I called Mark, who sent his assistant John to pick me up and bring me to Mark’s house. Which is filled with so many wondrous things that I couldn’t begin to tell you a tenth of what it contains.

I spent several enjoyable hours hanging out with Mark. He gave me advice. We exchanged “war” stories. We talked about a TV series he created which hasn’t made it to air, but which he will regain the rights to soon. All I’ll tell you about it is that it’s probably not what you might expect from Mark, that it’s terrific and that I would definitely watch it if it gets on the air. I do expect some smart TV producers will show up at Mark’s house carrying very large cartoon-like bags of money to get this series.

One sad moment came when Mark was surfing the web while we spoke. We learned Joan Lee, beloved wife of our mutual friend Stan Lee for seven decades, had passed. The downside of knowing as many people as Mark and I know - Mark more than I - is that it seems like we’re losing a good person every other day. Sigh.

Other than that, it was a great evening. Unfortunately, it didn’t last as long as I would have liked as jet lag caught up with me. I knew I needed to get back to the hotel and get a good night’s sleep before my Friday meeting with the Black Lightning team.

I did get a good night’s sleep, though early morning construction traffic woke me up sooner than I would have liked. I walked out of the hotel in search of breakfast, but didn’t find any places that appealed to me. I did see lots of construction workers heading to their job sites. Literally dozens of them. Like I wrote up front, this area of downtown Los Angeles was being rebuilt and refurbished at an impressive pace.

Wanting to eat something before I was picked up for my meeting, I ordered room service from the Ace Hotel. It was great food at a not outrageous price for room service. Maybe the best scrambled eggs I have ever had in my life and the sides were delicious as well. My compliments to the chef.

I packed and headed down to the lobby to check out. The car service picked me up just a few minutes later and drove me to the Burbank Studios for my meeting. Which I told you about on Thursday, so, if you prefer reading these trip reports in chronological order, you should go back and read that bloggy thing before you come back here tomorrow for what happened after my meeting.

Posted by Tony Isabella at 6:36 PM