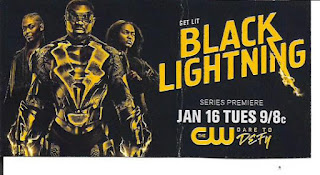 If I were reading this bloggy thing, what I would most like to read about today would be the star-studded DC Comics in D.C. event held this past weekend in our nation’s capital. The keystone of that stellar event was the world premiere of the Black Lightning TV series. And I am going to write about the huge deal that was. But I’m going to write about it tomorrow.

Today...you get a Black Lightning mission statement and an amusing in the “It’s funny because it happened to someone else” school of comedy telling of the journey my son Ed and I took in traveling to Washington, D.C. We’ll start with the heavy stuff, work our way to the funny stuff and, hopefully tie it all together so that you’ll be slapping your foreheads and saying “I saw how he did that.” Or maybe not. This isn’t an exact science.

Black Lightning is much bigger than Tony Isabella. Black Lightning is bigger than the comic books, the TV series and all the talented  people who have worked on the comics and the TV series. All these people, myself most especially, must recognize that and recognize the great responsibility that comes with being associated with this character. The question we must always ask ourselves is not what we would do, but what Jefferson Pierce would do. I think of Jefferson as the man I want to be. The TV show’s Salim Akil has said this as well. We didn’t share that thought with one another. It was simply the unspoken engine which drives us both.
I began to recognize and understand and embrace this mission when I started attending the East Coast Black Age of Comics Convention in Philadelphia. It started when black readers would come up to me, sometimes hugging me with tears forming in their eyes and tell me Black Lightning was the first comic they ever bought for themselves  because it’s the first time they saw themselves in a comic. In all fairness, for other readers, they can probably say the same for the comic books featuring the Black Panther, the Falcon or Luke Cage. But, as the creator of Black Lightning, it was a profound moment to realize how important my character was to so many readers. It was a life-changing moment.

I have told the tale of how, growing up in the very segregated city of Cleveland, my first black friends were comic-book fans met when they attended meetings of the Graphic Arts Society comics club I’d founded and which held monthly meetings at the Cudell Recreation Center. Yes, the same place where 12-year-old Tamir Rice was shot dead by police officers who should not have been police officers. The horror of Tamir’s slaying will never diminish and, even when I think of those fun meetings, I can never forget the terrible crime that was committed by those officers and the loss of a young life that should not have ended there.

Those three comic club friends - Bruce Burke, Leroy Crayton, Dennis Knowles - were the start of the journey that has defined much of my comics career. “Diversity” wasn’t in my vocabulary back then. But I thought there was something fundamentally unfair about the lack of black comics heroes for my friends. When I started working for Marvel Comics in 1972, I eagerly embraced assignments on Hero for Hire and Black Goliath.

My work on those Marvel heroes was why DC Comics wanted me to write a black super-hero for them. They handed me two completed scripts of an amazingly offensive title called Black Bomber. I refused to “punch up” those scripts and take over writing the series with its third issue. I convinced DC to kill the series and created my own super-hero. Black Lightning.

There have been ups and downs with my relationship with DC Comics. There was an unintentional glitch in inviting me to the “DC Comics in D.C.” event. But, once DC was aware of that glitch, the company and its representatives bent over backwards to include me and make me feel like an honored guest. I’ll tell you that story in my next bloggy thing. Or maybe, given how long-winded I can get, I’ll start telling that story.

Now that you have the mission statement, let me tell you how much it took to get me and my son Ed to the “DC Comics in D.C.” event. It was a harrowing adventure lacking only in Nazis for me to punch and snakes for me to dread.

DC booked us for a noon-ish flight on Friday. We would have arrived in plenty of time to see a special screening of the Batman: Gotham by Gaslight animated feature and enjoy dinner with Dan DiDio, Jim Lee and others. Then United Airlines canceled that flight, putting us on a flight scheduled to leave at eight in the evening. So the movie and dinner were off the table, but we would still get to D.C. in time to get a full night’s sleep.

Because the snow-covered roads weren’t being cleaned efficiently or at all, my daughter Kelly drove us to the airport hours before our flight was due to leave. When we checked out bags, we learned that our flight had been delayed by an hour.

We had a nice meal at The Pub, one of the better restaurants at the airport, then headed to our gate. Where we learned our flight had been delayed again. This would keep happening for the next couple hours. Finally, the gate attendant told us we would be departing at midnight. The crew on the plane, which was coming from New Jersey, were going to fly us to Washington D.C.

Two things you should know. Just to build suspense. We were flying United, which is far from my favorite airline at the best of times and, besides us, there were only two other passengers booked on the flight. Both were young women, one of whom had been waiting for a flight since nine in the morning.

The weather was much improved by the time the flight arrived at our gate. The arriving passengers deplaned. We had been told the crew was good to go. Then, just as we were waiting to board, we learned the flight was cancelled. We would not be able to leave until six in the morning on Saturday.

You will never convinced me that United cancelled this flight for any other reason that the airline didn’t want to fly with just we four passengers. Their bottom line was the only concern...and they made no further accommodations for us.

Okay, they did give the young women blankets since they were going to try to sleep on the floor. The United personnel acted as if they were handing out cloth of spun gold.

The airport hotel was booked, but, even if there had been rooms for us, United would not have paid for them.

There would be no food or travel vouchers given to compensate us for the gross inconvenience.

When I request the United Air Club be opened so that we could, at least, sleep on comfortable couches, we were told that was utterly impossible. I briefly considered breaking into the club. I have skills I don't talk about.

The young women tried to sleep, but, when we saw them later, they told us they had managed maybe a restless hour apiece. It’s no fun to sleep in a nearly deserted airport.

Ed didn’t fare better. He tried to sleep on the only row of seats in the area that had three seats in a row without armrests. But the overhead lights were too bright and the continuous music was too loud. I didn’t even try to sleep. What I did do, being a cup half full kind of fellow, was make a new friend.

Sylvia is an always-smiling black women in her late 40s. She drives one of those electric carts used to carry passengers who might have difficulty navigating the long airport terminals wherever they have to go. She was waiting on a long-delayed flight to arrive and just tooling around the terminal.

I was walking around the terminal trying to get a jump on my Fitbit steps for the day when she pulled up alongside me and asked me if I wanted a ride. This was a smile that could not be refused, so I accepted.

We spent a hour or more just driving around the terminal. She asked where I was going and why. I told her about the “DC in D.C.” event and about Black Lightning. She told me about her previous career as a teacher and was excited to hear Jefferson Pierce was a teacher in the comic books and a principal on the TV series. She knows young men who have a knack for drawing and who read comic books, so we’re keeping in touch. The plan is for me to talk to the kids about all the skills that go into making comic books.

We talked about our children and our lives. I tried to cajole her into an electric cart race. She drove me to the airport’s Dunkin Donuts, which was the only 24-hour eatery in the place and waited until I got an egg sandwich. We kept checking on my son and the two young women to make sure they were safe. It was an unexpectedly fun way to kill some time during an otherwise horrible night.

Her late flight arrived, so she drove me back to the gate where Ed has trying to sleep. I gave her my card so she could contact me at some later date. Hugs were exchanged.

I was still pissed off at United. I plan on giving them what for in an email complaint. I don’t plan on ever flying the airline again unless there’s no other choice. But, all the same, I can’t say I’m sorry that I made a new friend. That’s what’s life should be about, especially in a country where we have a Dumpster president and his Republican allies who constantly try to drive Americans apart with their bigotry and hate speech.

Four hours later, our completely packed airplane left Cleveland at its scheduled departure time. Sure, it was going to an airport a half-hour further away from our destination than the airport where we had originally been scheduled to land. Sure, the taxi ride cost us $75 as opposed to the $15 for our Sunday morning ride to our original airport. But, at least, we were on our way to Washington, D.C. and one of the best days of my life.

I’ll tell you all about that electrifying day in tomorrow’s bloggy thing. See you then.

Posted by Tony Isabella at 2:30 PM