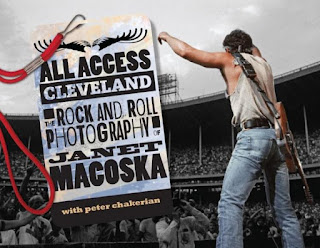 All Access Cleveland: The Rock and Roll Photography of Janet Macoska [Cleveland Landmarks Press; $25.95] is an amazing visual record of my friend Janet’s career as one of the great rock photographer of all time. Here’s what Amazon says about the book:

If rock and roll has been the soundtrack of your life, Janet Macoska has likely provided the accompanying visuals. Her celebrated body of work can be seen in the Smithsonian, the National Portrait Gallery in London, the Rock and Roll Hall of Fame and Museum, the Grammy Museum, and in Hard Rock properties around the world. David Bowie, The Clash, Led Zeppelin, DEVO, Hall and Oates, Heart, The Kinks, John Waite, Michael Stanley, and Alice Cooper are just some of the musicians who have used her photos on their records. This long-awaited compendium of native Clevelander Janet Macoska s 40+ years shooting rock and roll subjects presents many never-before-seen images from Janet s archives combining iconic imagery with entertaining, behind-the-scenes stories of her life as one of the world s preeminent rock photographers.
I like rock-and-roll, but it has never been a passion for me. What I love about this book is that its powerful images and commentaries allow me to understand why Macoska and so many others are so very passionate about the music. You’re never too old to learn something new, which is why I recommend this stunning photographic history to you. It would also make a great gift to the rock-and-rool fans in your life.