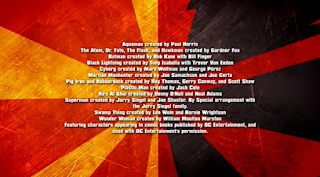 Bill Finger, co-creator of Batman, got his first on screen Batman credit on Adult Swim’s Robot Chicken: DC Special III. At the end of the show, the creator credit card read:

That was the big story of the episode, but there was another story missed by every major comics news site. Another changed credit was on that creator credit card:

If I hadn’t been late in learning of these credits, I would’ve been among the first to proclaim the Bill Finger credit was the more important story. It was long overdue and Batman is somewhat better known than Black Lightning.

I didn’t watch the Robot Chicken episode when it aired and haven’t watched it yet, though it is available for viewing on Adult Swim’s website. I learned about the Black Lightning credit from a dozen or so fans/friends who e-mailed me about it or posted about it on my Facebook page. Several of them sent me a screen grab of the credit card, for which I am grateful.

As regular readers of this blog and my Facebook page know, DC and I are working through a reconciliation on Black Lightning and other issues. I have not commented on these discussions and negotiations, except to confirm they are ongoing. My more than four decades as a comics industry professional have taught me not to be premature in making announcements. Things can change swiftly in the comics biz. Plans can go awry. Hopes can be dashed. I believe the discussions and plans are going well, but I don’t want my fans and friends to be disappointed if events don’t go as I hope.

I have responded and will continue to respond to developments that are made public by DC itself. When Black Lightning: Volume One, a trade paperback collection of my first Black Lightning run and some incidental stories was listed on Amazon and elsewhere, I told you what I could about it at that time.

Though no agreements between DC and myself have been finalized at this time, the wording of that Black Lightning credit is wording I agreed to. It is not 100% accurate, but “created by Tony Isabella; original series drawn by Trevor Von Eeden” is, to my ears and eyes, an unacceptably cluncky credit. I have not changed my position that I am the sole creator of Black Lightning. I am merely understanding of DC’s presumed obligation to Von Eeden. I’ve never sought to deny Trevor any financial rewards for his association with the original Black Lightning series. While I’m no legal scholar, I believe this wording serves the needs of every involved party.

I’m happy with the Black Lightning credit change, especially since DC enacted it before any agreement between me and the company has been finalized. A heads up would have been nice, but I understand how many different elements must be juggled whenever a company like DC does anything. That this credit is already appearing shows good faith on DC’s part. I’m very happy about that.

I wish I could share more with you on what Black Lightning things are being discussed. I hope DC and I will be able to share terrific news with you in the very near future. But I am committed to being cautious as things progress.

I will not be granting any interviews on this. Comics journalists are free to quote from this bloggy thing as long as they credit the source and - to be nice - link to this bloggy thing of mine. I beg them not to read too much or too little into this.

Thanks for your support and understanding.