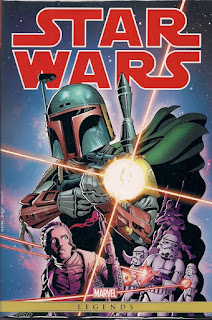 Star Wars: The Original Marvel Years Omnibus Volume 2 [$125] is an expensive hardcover book of 848 pages, which I got via the Medina Library. Amazon is currently selling the book at 66% off, so this would be good time to jump on that price.  Anyway, here’s what the Amazon entry has to say about this collection:

The very first Star Wars comic-book series continues! After the events of Episode V - The Empire Strikes Back, loveable rogue Han Solo is lost, frozen in carbonite. But as the search for Solo begins, Imperial Forces and other troubles keep getting in the way. Princess Leia clashes with Darth Vader! Luke

Skywalker goes on trial for treason! C-3PO and R2-D2 face danger on a droid moon! Lando Calrissian finds Cloud City deserted! If the Crimson Forever doesn't get the Rebels, maybe the new Imperial super-weapon will! And a new member joins the gang, with a crush on a certain handsome Jedi! Meanwhile, the discovery of a gold statue of Han reveals a hidden story from his and Chewbacca's past. And who are the Hoojibs? It's Star Wars in the Mighty Marvel Manner!

This volume reprints the remaining Archie Goodwin/Carmine Infantino issues and those are some of the best Star Wars comics ever done. But their successors were right up there as well. David Michelinie teamed with Walt Simonson and Tom Palmer for a terrific run. They were followed by Jo Duffy, Ron Frenz and Tom Palmer. The quality of the series never wavered.

Star Wars: The Original Marvel Years Omnibus Volume 3 [$125] could be out any day now. I’ll request a copy from my library, but there will likely be a pretty long waiting list. Look for my thoughts on the third volume at some time in the future.

Posted by Tony Isabella at 9:00 AM