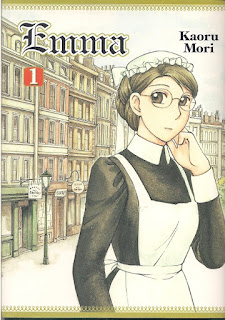 Kaoru Mori’s Emma is one of my favorite manga series. Here’s what Amazon has to say about it:

Calling upon his former governess, William Jones, gentleman, is startled when his knock is answered by an uncommonly beautiful servant, the soft-spoken Emma. Throughout his visit, William's eyes drift to the maid whenever she enters the room, and he contrives to meet Emma socially as she goes about her errands. But London society is a web of strict codes and divisions. For the son of a wealthy merchant, seeking out a working-class girl is simply not done! William's father plans for his son to marry into the peerage and elevate the Jones family to greater heights, but although William says and does what is expected of him, he longs only for Emma's company...

I first discovered Emma in the pages of Viz’s Shojo Beat magazine, which ran from July 2005 to July 2009. Shojo manga in general is aimed at a teenage female readership. The magazine was aimed at the same audience. Among the things that attracted me to the magazine was its physical format (a big thick magazine) and the contents (a combination of comics and articles, even if the articles were also aimed at teenage females). What attracted me to Emma and the other comics were their great characters and realistic situations. Human comedy and drama go a long way with me.

Emma is a gem of a character. While her manner might be off putting to readers who live in a world where women are a powerful force and becoming ever more so, it was consistant with the Victorian England  in which the tale is set. Emma handles adversity with quiet courage  and dignity. William surrenders to adversity, even when his heart would lead him elsewhere. They are both likeable characters.

I never caught up with my reading of Shojo Beat and stopped trying when the magazine was cancelled. But when Yen Press began printing the series in handsomely-crafted hardcovers or nearly 400 pages per volume, I got into the series again. It’s as delightful as ever and I now have a new appreciation for Mori’s fascination with the era and her exuberant depictions of same.

Yen Press has released two volumes of Emma to date with a third one scheduled for December.

Posted by Tony Isabella at 3:54 AM