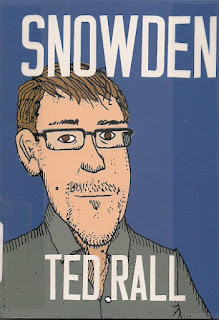 My local Medina library, thanks to its affiliation with the area-wide Clevnet organization of a hundred libraries, has been getting me some wonderful books and graphic novels. The latest was Snowden by Ted Rall [Seven Stories Press; $16.95]. Here’s what Amazon had to say about this angry look at recent American history:

As many as 1.4 million citizens with security clearance saw some or all of the same documents revealed by Edward Snowden. Why did he, and no one else, decide to step forward and take on the risks associated with becoming a whistle blower and then a fugitive? Rall delves into Snowden's early life and work experience, his personality, and the larger issues of privacy, new surveillance technologies, and the recent history of government intrusion. Rall describes Snowden's political vision and hopes for the future. In a way, the book tells two stories: Snowden's and a larger one that describes all of us on the threshold of tremendous technological upheaval and political change.

Snowden is a portrait of a brave young man standing up to the most powerful government in the world and, if not winning, at least reaching a stand-off, and in this way is an incitation to us all to measure our courage and listen to our consciences in asking ourselves what we might have done in his shoes.

My regular readers know I am a supporter of President Barack Obama and his administration. I believe he has done an outstanding job in many areas and in spite of the manic opposition of the Republicans and other right-wingers. But Obama hasn’t been a perfect leader for our nation and one of his biggest failings has been maintaining the fear-based surveillance of American citizens. Many of the actions taken by our government are patently illegal, others, legal though they might be, are unconscionable.

The more I learn about the surveillance of American citizens, the less I see Edward Snowden as traitor or villain. It’s a complicated situation. He exposed illegality and arguable evil at tremendous risk to himself. We need many more whistle blowers like him and, no matter the circumstances of their employment, such men and women need to be protected from retaliation by their employers and our government. I pray I will see that day soon.

Posted by Tony Isabella at 5:05 AM