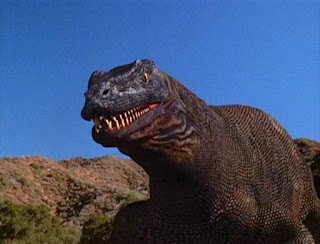 Over the weekend, I watched two monster movies that were basically the same movie. Among the many similarities between the two films was that Glori-Anne Gilbert, a sweetheart of an actress, model and Mid-Ohio-Con guest, was in both of them. She survived one of them and died in the other. Bad komodo!

The Curse of the Komodo (2004) and Komodo vs. Cobra (2005) were directed by Jim Wynorski as Jay Andrews. He was a co-writer on the second of those movies.

Here’s what the Internet Movie Database says about The Curse of the Komodo:

Genetically-engineered Komodo dragons have become ginormous creatures hunting people on a remote tropical island. A small group of scientists must stop the dragons before they escape the island and destroy the rest of the world.

Here’s what it says about Komodo vs. Cobra:

In both movies, the super-sized creatures are created by the usual “science gone awry.” Well-meaning scientists have their experiments co-opted for military applications, namely, creating creatures who will eat the enemy. Apparently, the Geneva Convention, which may or may not still be a thing, has nothing in it about siccing monsters on one’s foe.

The generals in charge of the projects are both major assholes with no human decency to speak of. They both order the islands on which these creatures have been created to be bombed out of existence to protect their culpability in these heinous actions. The bombers do a piss-poor job, given the monsters are amphibious. Both are undone when survivors expose the projects via the media. One general puts a bullet in his brain, the other looks like he wants to. These scenes come right before the shock endings of the movies.

Martial artist Paul Logan, who was so great as the piranha-kicking super-soldier in Mega Piranha (2010) and who will be appearing in the forthcoming CobraGator, is in both movies. In Curse, he plays a ruthless criminal who robs a casino and kills the casino manager. In KvC, he plays the monster movie equivalent of a Star Trek red shirt in the opening scene slaughter of a squad sent to the island to learn why  the scientists haven’t stayed in touch with the general du jour. You can probably figure out why. By the way, both movies have this opening scene and I’m pretty sure they also share some of the same footage.

Each movie has a father-daughter duo. Neither father survives the movie he’s in.

In each movie, komodo saliva is toxic and can infect anyone unlucky enough to even brush up against a spit-covered leaf. You can also be infected if a saliva victim bites you before they die.

Each movie has an ex-military character. In Curse, it’s the chopper pilot hired by Logan. In KvC, it’s the captain of the fishing boat hired to bring environment activists to the island.

Each movie contains several errors as to branches of the military, the training a member of that branch would have, and the aircraft used to bomb the islands. In most cases, the planes shown are not even American planes. All praise cheap stock footage.

Though the chemicals used to increase the size of the monsters are said to be in the ecology of the island, we don’t see any enormous creatures except for the komodos and the cobra. In KvC, we do see corn stalks the size of buildings. The question of what eating such super-food would do to a human being is never discussed, though a saliva-infected character wonders if he will also become a giant. He doesn’t live long enough for this to happen.

In both movies, it’s said the monsters have eaten every animal on the islands except for the remaining humans. However, in KvC, you can hear animal background noises to the end of the movie.

Both groups of survivors realize the military doesn’t give a rat’s behind about saving them. They have to reach a helicopter to have any chance of escape.

Each movie has a surprise ending. In Curse, Paul Logan’s character, left on the island because he went back for the casino money, sits on the beach surrounded by millions of dollars. That’s when a trio of giant komodos come out of the ocean and on to the beach. The man was having a really bad day.

In KvC, a saliva-infected and believed-to-be-dead scientist who was left behind, suddenly opens his now-reptilian eyes. His mouth opens and he now has a forked tongue like the komodo. This cries out for a sequel. Man-Komodo? Night of the Human Komodos? Lord help me, but I would watch either of those.

Despite all the snide remarks I made above, I enjoyed watching both of these movies...or the same movie twice. As long as I was having fun, the similarities don’t really bother me. I don’t watch these low-budget monster movies seeking great art. I just want to have a good time for ninety minutes or so.

These films each had characters I liked, which involved me in their desperate fights for survival. The acting was good. The CGI effects were a little shaky here and there, but well within my tolerance. Give me a few months and I’d probably watch them again. You should watch them at least once.

Posted by Tony Isabella at 8:50 AM