A SALUTE TO STAN LEE 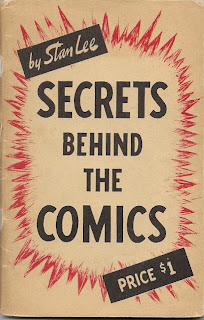 “All the best to Tony Isabella - the fearless fella who’s the
thinking man’s copy writer! Keep up the good work helping to put
ol’ Marvel on the map! Stan Lee ‘73"

-Inscription on my copy of Secrets Behind the Comics (1947)

One of my most cherished possessions is a well-read copy of Secrets
Behind the Comics by Stan Lee.  Published by Famous Enterprises in
1947, it’s a breezy hundred pages of instruction on how comic books
are created.  I asked Stan to sign my copy shortly after I started
working at Marvel Comics.

The first comic-book stories I wrote as a young fan were written on
the same paper I would draw them on.  I quickly figured out that I
was a terrible artist, so I started writing scripts which I would
then cajole my artist friends into drawing.

The first dozen or so scripts I wrote were written to the format I
found in Secrets Behind the Comics. Panel descriptions in the left
column and copy in the right.  After that, I switched over to the
panel description followed by copy method I still use today.  But
Stan’s 1947 method was a good starting point for a kid striving to
learn the art and craft of comic-book writing.

Stan grinned when I asked him to sign the book.  His delight seemed
to be two-fold.  He was excited to see the book again so many years
after he wrote it and that I obviously cherished this book.

During my first several months at Marvel, I worked with Stan two or
three times a week.  I’m not sure he was aware I’d started writing
the occasional script for Marvel’s comics at the time.  He knew me
from the covers and ads and letters pages and other odds and ends
I was writing for Marvel’s magazines and British weeklies.  Hence,
the reference to me as a copy writer.

While on staff at Marvel, I learned more about comics and writing
from Stan, and Roy Thomas and Sol Brodsky, than I would learn from
every other boss and editor I would ever have.  Combined.  It was
the best education a young comics writer and editor could have and
I’ll always be grateful to them for it.

“I used to work for Stan Lee” is a sure attention-getter among avid
comics readers and those who only know comics from the blockbuster
comics movies of the past couple decades.  You and I know that the
people who can say they worked for or with Stan likely number into
the tens of thousands.  Stan ran Marvel for decades and, while he’s
still associated with Marvel, he’s since worked with several other
comics and entertainment companies and launched many companies and
ventures of his own. Even so, folks are still impressed when I tell
them I used to work for Stan.

Almost everyone knows Stan.  They know he created/co-created most
of the Marvel Universe that drives the super-hero movies they love.
They look for his cameo appearances in those films and get excited
when they spot him.  They know Stan, they like Stan.

Stan has been a major influence on my life and career.  At a time
when I was losing interest in comic books, the Marvel comic books
he did with Jack Kirby, Steve Ditko, Dick Ayers and Don Heck were
what revived my passion for the medium.

Stan and Jack’s Fantastic Four Annual #1 (1963) is my pick for the
greatest comic book of all time.  More than any other comic book,
it made me want to make comics myself.  Which is why I devoted an
entire chapter of 1000 Comic Books You Must Read to it.

Working with some of the most exciting artists in comics, Stan was
able to bring action, fun, a sense of belonging and even a sense of
nobility to comic books.  Back then, comics were still looked down
upon, but, thanks to Stan and his incredible collaborators, I never
lost the sense of wonder and certainty of their worth with which I
have regarded comics ever since.

Stan will celebrate his 90th birthday in late December.  In CBG and
elsewhere, comics fans will be celebrating with him.  They’ll talk
about their favorite Stan Lee comments and comics and moments and
- no other word fits here - they will marvel at how active and busy
he remains at age 90.  As well they should.

Over the years since I worked with Stan, he and I have kept kind of
sort of in touch.  Several e-mails each year.  The occasional phone
call. A precious few lunches and meetings.  Each one memorable for
me and probably much less so for him.

Stan and I were planning to get together at one of the conventions
at which he was scheduled to appear in September.  He had to cancel
that appearance because he was getting a pacemaker.

When I first heard the news, my immediate response was to hope that
he was okay.  He was.  So I’m now going to deny that response and
replace it with a better one.

When I first heard the news about Stan getting a pacemaker, I was
delighted.  I figured it would slow him down enough for the rest of
us to keep up with him.  Fat chance of that.

Happy birthday, boss! Please know this “thinking man’s copy writer”
thinks of you often and always with great fondness and the utmost
respect.  Much love to you and yours from me and mine.

It’s time for CBG’s annual holiday gift guide, which always puts me
at a disadvantage on account of my monthly reviews are pretty much
gift suggestions anyway.  Editor Brent “the Gent” Frankenhoff has
asked CBG’s writers for five gift recommendations and the gift we’d
most like to receive.

Here are my recommendations for you and your loved ones:

Weekend movie matinees in the comfort of your home. I’m planning
to give this gift to myself in 2013.  I’ll lay out theater treats
like popcorn, candy, nachos and my favorite soft drinks.  Once I’m
sitting in my favorite spot on the couch - hey, if it’s good enough
for Sheldon Cooper - I commence the afternoon entertainment.

First up is a Three Stooges short, followed by theatrical cartoons.
I prefer Bugs Bunny and other Warner Bros. greats, but Popeye would
be an acceptable substitute.

For me, the afternoon’s double feature would have to consist of two
monster movies. The first film would of the classic variety: the
Frankenstein Monster, Count Dracula, werewolves, mummies, creatures
from black lagoons.  We’re talking Universal or Hammer.  The second
would feature Godzilla or another of the gigantic critters who have
threatened mankind over the decades.

In between the two movies, I’d show a chapter of some movie serial.
Captain Marvel, G-Men, Dick Tracy, or one of the other cliffhanging
thrillers that kept kids coming back to their local movie theaters
week after week.

Weekend movie matinees can be tailored to your tastes or the taste
of the person to whom you’re giving this cinematic present.  Keep
it fun.  Let yourself be a kid again.

Trade paperback collections usually offer a great chunk of story at
a reasonable price.  Alas, many current series never seem to end a
story in a satisfying manner.  Which is why I recommend series that
aren’t tied in to a dozen other titles in a shared universe.  Off
the top of my head and with apologies to any creators and works I
forget, those recommendations would include: Astro City, Bone, Love
and Capes, Usagi Yojimbo, Starman, Sandman, Strangers in Paradise,
Marvels, Avengers Academy, Invincible, The Walking Dead, Chew, The
Batman Chronicles, Little Lulu, Uncle Scrooge, Concrete, American
Splendor, Marvel Firsts, Amelia Rules, Akiko, Elfquest and others.

Manga. There are comics for every interest and taste and Japanese
comics deliver incredible variety.  Interested in the behind-the-
scenes stories of manga creators? Bakuman is about two young men
who are  determined to create the best and most popular manga they
can.  Basketball fans will get a thrill from Slam Dunk.  TV’s House
has nothing on the medical science-fiction adventures of Black Jack
by Osamu Tezuka. Crime, international intrigue, politics, horror,
samurai, romance, comedy...you won’t have to look far to find manga
in any genre you can think of.  Look a little further and you will
find genres you never even dreamed existed.

Commissioned art, original art, sketches.  Buying comics art is not
something you can enter into lightly.  Works of questionable origin
are becoming more common.  However...

You can work directly with comics artists or their agents to obtain
commissioned art custom-made for you.  I’ve started commissioning
pieces teaming up my own Black Lightning with characters created by
artists whose work I love.

Original art isn’t what it used to be as many comics are inked and
lettered on computer.  But, whether you like comics art that shows
the whole package or penciled pages untouched by any one other than
the pencil artist, look around for a reputable comics art dealer,
of which there are many.  They’ll help you find the pieces for that
special comics fan on your gift-giving list.

Sketches.  Get yourself a nice sketchbook and hit the conventions.
Some artists do more elaborate drawings than others, but, no matter
how much detail they draw, you’re still going to end up with a book
filled with wonderful art at generally reasonable prices.  Imagine
the look of delight on the face of your gift recipient when he or
she gets a sketchbook filled or even partially filled with wondrous
sketches.

Whatever holidays you celebrate, how ever many birthdays your loved
ones and friends are willing to admit to, these suggestions should
make their day. It may be more blessed to give than to receive, but
receiving cool stuff is pretty sweet, too.

Suggesting gifts for CBG readers was easy.  Figuring out one gift
I’d like to receive wasn’t.

I’m a guy with a five-year plan to reduce my Vast Accumulation of
Stuff to a manageable level.  I’m made good progress with all the
garage sales I held this summer, but there is still an awful lot of
stuff to contend with.  My Fortress of Storage looks like the final
scene of Raiders of the Lost Ark except without anything that can
melt your face off.

My end game in my war against the VAOS includes turning my office
into a more efficient and pleasant space.  That’s when I decided on
that one gift I’d most like to receive.

Bookshelves.  Handsome sturdy bookshelves lined up against the wall
across from my desk.  My comics history books would be organized on
those shelves and easy to get to when I’m checking a fact for this
column or my blog.  There would also be room for other items, such
as my manga books, my favorite graphic novels and reprint volumes
of classic material and maybe even my DVDs.

Even though I’m cutting my VAOS down to size, one wall of shelves
wouldn’t be enough to hold all of the above.  It would still be a
darn good start to a problem that has vexed me for two decades and
change.  Now all I have to do is hope Sainted Wife Barb reads this
column when I “accidentally” leave it on the kitchen counter.  One
gets forgetful on attaining my advanced years.

Whatever holidays you celebrate, here’s wishing you the happiest of
days with your loved ones and your own Vast Accumulations of Stuff.

Posted by Tony Isabella at 5:20 AM