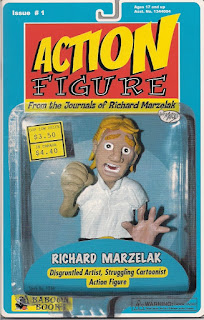 ﻿Richard Marcej sent me a copy of Action Figure: From the Journals
of Richard Marzelak #1 [Baboon Books; $3.50].  The 36-page, mostly
black-and-white with some duo-toned pages comic book was published
in September 2006 and never had a second issue.  I’ll let Richard
himself tell you about it:

“A little more than six years ago, I started a series loosely based
on my days working first with Hasbro Toys and then with Hallmark
Cards.  I was a designer/artist at Hasbro during the 1980s when
they exploded as a major company.  I then went to Hallmark where I
worked as a designer and illustrator dealing with many of their
licensors.  I dealt with Marvel, Warner Brothers and Disney.  It
was my belief many readers who enjoy comics would also find behind
the scenes stories involving this subject matter enjoyable...and
yes, I have a tone of material that I’ve recorded in personal
journals from those days.  Unfortunately, Diamond Distributors and
comic shops across the country didn’t feel the same way.”

I think Richard’s instincts were in the ballpark.  Action figures
and related merchandise are a big part of the comics marketplace.
His cover is a darn clever one and the interior stories and art are
good.  If Action Figure had come from a more established publisher
and if Marcej had worked with an editor who could have helped him
focus and refine the material, the comic might well have been able
to reach a larger audience.

Richard still believes the concept could work and is contemplating
returning to it in a graphic novel format.  In the meantime, he has
lots of copies of this issue available for sale on his Baboon Books
website.  It’s worth checking out.

With Action Figure, Richard also sent me a small sample booklet of
“My World and Welcome to It.”  It’s a drawn blog and I bet if you
ask nice when you order Action Figure #1, he’d throw in a copy of
this clever webcomic.

I have this great friend who loans me his comic books after reading
them and doesn’t seem to care how long they take up space in my
house rather than his.  As a result, I have literally thousands of
his comic books.  One of my resolutions for 2013 is to go through
them by this time next year.  I suspect by March I’ll be incredibly
selective about which comics are worth even a quick flip-through.
From time to time, you can expect brief remarks on various titles.
The All New Batman The Brave and the Bold #1-13 [January 2011 thru
January 2012; $2.99] are worth complete reading.  Written by Sholly
Fisch and usually drawn by the wonderful team of Rick Burchett and
Dan Davis, these issues have all the charm and fun of the animated
series that, in a fairer universe, would still be airing original
episodes every week.  Sigh.

Suitable for all ages, Fisch’s stories are loaded with Easter eggs
for older readers.  I literally cackled out loud when, as a throw-
away panel, we learned of the successful conclusion of the quirky
Jason’s Quest series (written and drawn by Mike Sekowsky) than ran
in three 1970 issues of Showcase.  Spoiler: with help from Batman,
Jason is reunited with his kid sister.

My favorite versions of Batman are those in which he is driven but
not insane and in which he accomplishes missions without collateral
damage to innocents.  “My” Batmen don’t always have to be as much
goofy fun as the hero of these comic books, but they do have to be
both competent and human.

Alas, The All New Batman The Brave and the Bold ended its run after
16 issues.  With DC publishing about a dozen sullen, teeth-gritting
Bat-titles, couldn't the company make room on its schedule for a title
like this one?

I read all 26 issues of Gotham City Sirens [August 2009 to October
2011; $2.99], a series starring Catwoman, Harley Quinn and Poison
Ivy in a shaky-but-believable alliance.  The issues written by Paul
Dini are wonderful.  After he departs, the title slides into crap
quickly.  With the “New 52" offering the opportunity to finish the
series on a happy note, the concluding issues instead took Harley
and Ivy back to their darkest personas.  It was as unsatisfying an
ending as I could have imagined and foreshadowed the grim sameness
of the “New 52" titles.

I also read Madame Xanadu #1-29 [Vertigo/DC; $2.99] by Matt Wagner
and a variety of spectacular artists.  The first ten issues of the
title were tedious, a combination of not particularly interesting
back story and Xanadu PMS-ing over the Phantom Stranger for a few
centuries.  Whenever Wagner returned to the back story or brought
in Morgaine Le Fay, evil sister of the title heroine, I would lose
interest.  However...

When Wagner wrote arcs involving Madame Xanadu interacting with the
more or less modern world and such DC heroes as the Sandman or the
Martian Manhunter, I really enjoyed the series.  When he did more
or less done-in-one stories of Madame Xanadu helping people, I also
enjoyed those.  To me, heroes are more heroic and interesting when
they are helping people than they are when they are fighting their
personal foes for their personal reasons.

Madame Xanadu concluded its run on a satisfying note.  The heroine
has since been reclaimed from Vertigo for Demon Knights, one of the
“New 52" titles launched last year.

Zatanna is one of my favorite comics characters when she’s written
well, which is usually the case when she is written by Paul Dini.
Zatanna, her most recent solo series, ran 16 issues from July 2010
to October 2011.  In the “New 52" universe, she ended up in Justice
League Dark and lacking most of her characteristic charm.  Though I
find JLD moderately entertaining, the joyless Zatanna that appears
there isn’t to my liking.

I read Zatanna #5-16 last week and thought they were pretty spiffy
comic books.  Well-written, well-drawn and, though Zee faced some
truly nasty foes, she herself didn’t succumb to the darkness that
overwhelms almost all DC heroes these days.  I’d recommend the run.
It was collected in two trade paperbacks, but I’m not sure either
is currently in print.