BASED ON REAL OHIO HISTORY 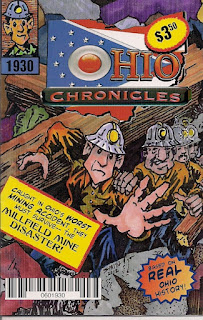 ﻿Former elementary school teacher Lee Smith sent me four issues of
Ohio Chronicles [Prosperity Graphics; $3.50 each]. These booklets
combine Ohio history with comics in a fun way and can be enjoyed by
both young readers - their intended audience - and adults.  I got
a kick out of them.

Issue #1 covers the Millfield Mine Disaster of 1930, so maybe “fun”
isn’t as evident as in later volumes.  Smith opens with an inside
front cover that sets up the situation and asks the reader what he
or she would do.  Then, in 16 pages, he tells the history of this
event in comics style.  An article about the event from the Dayton
Daily News runs on the inside back cover and back cover.

In the other issues I received, Smith wrote about fugitive slave
Addison White (#5); Ohio Governor Nancy Hollister, who assumed the
office when George Voinovich decided to leave early to assume his
new position as a U.S. Senator (#7), and Richard Fenton Outcault,
the Ohio cartoonist who created the Yellow Kid (#8}.  The Outcault
issue also features examples of other early comic strips.  I like
the way Smith delves into lesser-known Ohio events.  In the history
of a state, nation or world, it’s the smaller strokes that inform
the larger ones.

In his letter to me, Smith wrote, “My comics are unlike anything on
the market because they deal specifically with Ohio history.  Each
issue features a story that introduces elementary age students to
Ohio’s rich and colorful history. I am a former elementary school
teacher with little comic book experience, but have had a love of
comics and have thought they would be useful in the classroom.  My
approach was to think what comics might be helpful to teachers,
rather than what comic book people would like to make.  This is my
second year working with these comics and I have managed to keep a
bimonthly schedule.  I have even created Teachers Guides so they
can be used in schools.”

All eight issues of Ohio Chronicles are available for purchase at
the Ohio Comics website.  There are also teachers guides, a blog,
and other documents to be had and seen.  Though not typical comic
books and not as refined as say, the Classics Illustrated comics of
my youth, I think Smith’s comics are worth checking out.

I’ll be back tomorrow with another “October Surprise” review and a
few other items of interest as well.