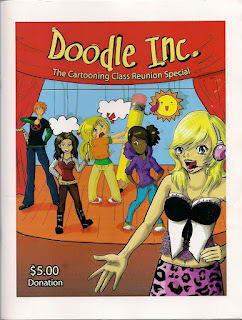 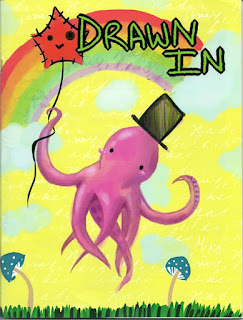 ﻿Greg Hatcher writes for the “Comics Should Be Good” department of
Comic Book Resources. Involved in cartooning programs at Madison
and Aki Kurose Middle Schools, Greg sent two publications from the
YMCA of Greater Seattle..  If he sent a cover letter with these two
magazines, it disappeared into the office of a blogger who has the
organizational skills of a howler monkey.

Hatcher is the editor of Doodle Inc. The Cartooning Class Reunion
Special [March 2011; $5].  This 68-page, black-and-white magazine
features the work of several young cartoonists and the quality of
their work is remarkable.  All stories and art are copyrighted to
their respective creators.

“Sailor Spiderman & Tuxedo Batman” by Brianna Edwards is subtitled
“Comics and Me, a Love Story.” It’s the most accomplished of four
stories about cartooning, not surprising given that Edwards is now
an art teacher.  But there’s a wonderful enthusiasm to the pieces
by Aja Reb, Amanda Stephens and Katrina Varney, the mag’s assistant
editor.  I found myself smiling at Varney’s charming drawings and
her struggles with deadlines.

Rounding out the magazine are “Chef” by David Lloyd, an interesting
tale of chefs involved in international diplomacy and intrigue, and
a selection of pin-ups by cartooning class alumni who didn’t have
time to produce full strips.

From the back cover...

Thank you!!! The proceeds from the sales of this book support not
just our own Cartooning programs at Madison and Aki Kurose Middle
Schools, but many other YMCA art and activity programs running in
partnership with the Seattle School District, including Drama,
Dance and Young Authors.

Drawn In [Spring 2012; no cover price listed], the second magazine,
was edited by Varney and features three long stories by Stephens,
Edwards and Alisha Dacus.

In “One Wish” by Stephens, a lonely young man wishes upon a star.
He wishes for a friend and, the next morning, a friend he’s never
seen before shows up to walk to school with him.  While the art in
the story could use some refinement, the story’s heart carries it.

“Maneki Neko” is an exuberant cat story by Dacus, whose work didn’t
appear in the previous volume. It was fun stuff.

Edwards offers a long snippet of her webcomic “Faleria,” a fantasy
serial involving a dream world that becomes very real to the young
woman dreaming about it.  I’m not a big fantasy fan, but, as noted
earlier, Edwards is an accomplished artist.  I’d like to see a bit
more certainty of storytelling and visualizations of the creatures
feared but not seen.

Neither of these two magazines offers a clue as to how one might be
able to order them.  I’m hoping Greg chimes in with a comment that
provides that information.