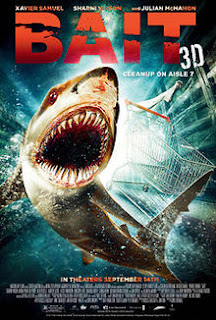 ﻿I’ve watched eight movies this month, which is surprising because
I’m usually hard-pressed to watch even one movie a week.  But, for
one reason or another, I tended to grab a DVD or Blu-ray when I was
done with my day’s work or because it was something to do with my
family without braving the holiday shopping traffic.

Bait (2012) can be snidely dismissed as “sharks in a supermarket,”
but that doesn’t do justice to this entertaining Australian horror
movie.  It was originally shown in 3-D, but it’s effective without
the 3-D.

Lifeguard Josh is hung over after a bachelor party.  He’s going to
marry Tina, the sister of his best friend Rory, also a lifeguard.
Rory volunteers to do a job Josh usually does.  Enter a real hungry
shark who kills an old man and, despite Josh’s best efforts to save
his friend, gobbles up Rory as well.  The marriage never happens.
Josh can’t forgive himself.

Josh, working in a supermarket, is reunited with Tina under awful
circumstances.  A robber has killed one woman and now threatens to
kill Tina as well.  That’s when a tsunami wave floods the store and
the store’s parking garage....and when a pair of great white sharks
find themselves in a new hunting ground.

What makes the movie work for me is that the survivors are, for the
most part, believable and sympathetic characters.  Whenever they do
anything reckless, it’s because they have no other choice.  There
are some heroes among them, which isn’t necessarily a guard against
sudden death.

The sharks don’t do anything very outrageous either. They are not
super-intelligent or super-powered.  It’s pretty much a fair fight.
While the movie does contain some gory violence, it doesn’t dwell
on it overmuch.

Bait gets three out of five stars.  It’s not a great film, but it’s
a good one.  I recommend it.

As I mentioned in a recent column, I received the Blu-ray edition
of Marvel’s The Avengers as a gift from my son Eddie.  We watched
it after Christmas and the second viewing confirmed my opinion that
it’s the best super-hero movie ever. A great script brought to life
by wonderful actors and scoring big in both action and human drama.
The contrast between this film and the pathetic Dark Knight Rises
is stunning.  How can DC and Warner get it so wrong time and time
again? I recommend The Avengers to one and all.  I give it five out
of five stars.

Godzilla vs. Biollante (1989) is the second in the “Heisei” series
of seven movies which started with 1984's The Return of Godzilla
and ended with 1995's Godzilla vs. Destoroyah.  It’s a favorite of
my son Eddie’s but it only became available on DVD and Blu-ray this
year.  I bought the Blu-ray edition and we watched it on Christmas
Eve.  I can see why Eddie likes it so much.

My favorite Godzilla movies are those with compelling human stories
alongside the monster mayhem.  This one has them: a scientist who
grieves for his daughter, agents of foreign governments trying to
steal Godzilla cells, a young scientist searching for a new life,
the beautiful psychic with whom he’s romantically involved, and a
career soldier determined to bring Godzilla down.

There are also cool science fiction elements.  Biollante is created
from Godzilla cells, plants, and the cells of the older scientist’s
late daughter.  The Japanese also use the Godzilla cells to make an
effective weapon against the monster.  It’s nice to see humans hold
their own against the Big G.

This one gets four out of five stars.

If Metal Tornado (2011) hasn’t already aired on the SyFy Channel,
it surely will.  The movie revolves around a businessman’s plan to
harness energy from solar flares and transmit it to his customers
on Earth.  The film stars Lou Diamond Phillips, Nicole de Boer and
Greg Evigan.  It’s not very good.

When the collection apparatus is tested, 2% of the energy escapes
and forms a magnetic vortex that looks like a tornado sans wind and
with metal spinning around inside it.  The effect is cool the first
time you see it and only once thereafter...when a woman and her car
are sucked into it.

Metal Tornado is a surprisingly bloodless film.  We hear of people
dying, but the deaths are off-camera.  The only notable elements in
the film are that the businessman really does want to supply cheap
and clean energy to the world and that, after covering up info that
could have prevented this disaster, he does work with the heroes to
try to stop what he has created.  Unfortunately, that’s not nearly
enough to save this picture.

I give it one out of five stars.

I loathe The Dark Knight Rises.  It’s darn near everything a super-
hero film shouldn’t be. Let me count the things I most loathe about
this piece of cinematic crap.

The “hero” is a quitter and his last-minute and unbelievable escape
from death only allows him to quit again.

Christian Bale’s raspy voice routine gets old in about ten seconds.
Suck on a lozenge, why don’t you?

The once-noble Commissioner Gordon is a lying politician who has
been deceiving the public for years.

No one takes a moment to note the ending of the previous film was
really stupid.  Make the dead villain a hero.  Make the live hero
a villain.  Yeah, that’s gonna work.

The dialogue is so bad even good actors like Michael Caine, Gary
Oldman, Anne Hathaway and Morgan Freeman can’t save it.

Bane always looks stupid.  He’s occasionally been written well in
the comic books and in the cartoons - the cartoons generally play
him for laughs - but he’s a scenery-chewing clown here.

Remember one of the few good moments in the previous Batman film?
When neither law-abiding citizens or prisoners would condemn each
other to death?  Don’t look for that in this film with its soulless
soldiers blowing up a bridge and condemning a busload of orphans to
death.

Big body counts that leave no emotional impact on the audience of
this movie.

The movie is a senses-numbing 165 minutes long.  Someone needed to
whack it down to under two hours.

Was there anything I liked about the movie? Two things.

One. Joseph Gordon-Levitt did better than any other actor with the
lame dialogue.  His character was the only character I liked.  His
character’s background was good as well.

I give this movie two out of five stars, mostly because some comics
creators got paid.

Sing it with me. Grandma got impaled by an icicle, standing outside
setting up the plot.  Okay, yeah, that doesn’t work as a song, but
it is the first of several gruesome deaths in The 12 Disasters of
Christmas (2012), which aired on the SyFy Channel.

The plot? Mayan prophecy.  Granddaughter is latest in a long line
of women who have prevented the end of the world in the past.  All
kinds of familiar weird stuff we’ve seen in other cheesy movies on
SyFy, including people flash-frozen and shattered.  Bad acting and
writing, including a Bible-thumping big box store owner who thinks
he has to sacrifice the granddaughter to save the world.  Doesn’t
even succeed at being so bad it’s good.  It’s just incredibly bad
from start to finish.

It gets no stars. Not even a little smouldering ember.

Dragon Wasps (2012) is yet another movie I watched on SyFy, but it
starred the always entertaining Corin Nemec.  He’s starred in more
than a few SyFy movies and, while none of them are great films, all
were solid B-movie fun.

In this movie, Nemec is hardcore U.S. Army in the Belizean jungle.
He’s at the end of his service, but not sure he wants to leave the
Army.  Up until the appearance of fire-breathing wasps large enough
to carry off a person, the biggest threat in the region was a nasty
drug lord with his own guerilla army.

Nemec agrees to help a comely scientist find her missing father and
they quickly run afoul of the drug lord. Mayhem ensues.  Given the
remoteness of the region, the body count is still impressive with
the humans holding their own with the wasps.

Fun bit: rubbing the leaves of the coca plant which is required to
make cocaine onto one’s flesh makes one more or less invisible to
the wasps.  Making due with actual cocaine, Nemec and the rest of
the good guys are essentially stoned as they search for the nest of
the wasps and any survivors of the wasp abductions.

Dragon Wasps is perfectly acceptable SyFy entertainment, the kind
of movie I loved as a kid.  I give it two stars.

My December movie viewing started with The A-Team (2010), which I
got from the library on the advice of Eddie.  He made no claims for
it, other than to opine I would find it entertaining.  Which I did.

You know the drill from the 1980s TV show.  Elite team of soldiers
convicted of crimes they didn’t commit.  The movie is their origin
story in which we see the crimes and watch them try to prove their
innocence.

The bigger budget of the movie allowed for much bigger and better
explosions, a decent script and above-average acting.  The violence
is sometimes cartoon-like and sometimes more serious.  That duality
of violence was a bit jarring, but it didn’t keep me from enjoying
the movie.  Which is all I ask of any movie.

The A-Team ends where the TV series begins as the narrator intones:
“Still wanted by the government, they survive as soldiers of
fortune. If you have a problem, if nobody can help, and if you can
find them, maybe you can hire the A-Team.”

This one earns three out of five stars.

Check back a little later today for this week’s Vast Accumulation
of Stuff End-of-the-Year Blow-Out Sale.  These weekly sales support
this bloggy thing and my wild lifestyle, so please order from this
and future sales.  Your patronage is appreciated.

Posted by Tony Isabella at 5:53 AM