THE DAYS AFTER CHRISTMAS 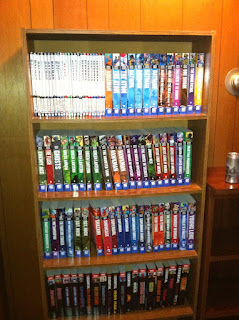 Today’s bloggy thing is being written for two reasons.  The first
is so I can show how cool my “outside the reading room” bookcase is
looking with all those DC Showcase and Essential Marvel volumes in
it.  There are more DC than Marvel volumes, but that’s because we
have yet to move the matching bookcase into place.

Funny story there.  We’d completely forgotten that we already had
the matching bookcase.  Y’see, when we were boxing up books to be
taken to my Fortress of Storage, the matching bookcase was put in
the part of our basement that serves as a catch-all for those items
we didn’t want to move into storage.

Our neighbor Greg, who did most of the heavy lifting in the move,
laid the bookcase flat on a dresser and filled it with empty gift
boxes.  It held the gift boxes well, but, after a while, we forgot
it was actually my matching bookcase.

I plan to reclaim the bookcase sometime after our usual New Year’s
Eve party.  Which Barb thought we weren’t having until I reminded
her our neighbors naturally gravitate to our house on that evening.
I suppose we could turn out the lights and pretend we’re not home,
but I enjoy the annual gathering.  So does Barb...at least when she
isn’t caught up in the chaos of Christmas.

Helmuth von Moltke the Elder, otherwise known as “that German guy,”
is known for having said “No plan survives contact with the enemy.”
The next thing he said was “Oh, rot, everyone will be quoting that
and think it means that war plans are useless, which is not at all
what I was going for.”

My master plan for my continuing war against the VAOS, which we all
know stands for “Vast Accumulation of Stuff,” included setting up
my combination library/mailing station/reading room by the end of
the year.  Which isn’t happening because more stuff ended up in the
room because of the holidays.

My master plan was also upended, albeit in a most wonderful manner,
by Sainted Wife Barb buying me two incredibly nice bookcases.  These
are gorgeous and sturdy as adamantium.  The bookcase shown above is
fine for the relatively light weight of the Essential and Showcase
softcover volumes, but these new bookcases will easily and securely
hold my Marvel Masterworks and Omnibus editions as well as similar
books from DC, Dark Horse and PS Publishing.

Getting these new bookcases means I have to rethink the immediate
details of my master plan and that’s the second reason for today’s
bloggy thing.  I’m using my blog to think out loud.

On my birthday, I made a list of 20 resolutions for the New Year,
most of which I won’t be sharing with my readers until I have made
decent progress on them.  The ones I won’t mind sharing involve my
garage and online sales.  Weather permitting, I’m hoping to start
my garage sales in April or May, so resolutions involving them have
to be met on a weekly basis.

The new bookcases are too big and beautiful to sit empty, so they
have to go into my office as soon as possible.  That means clearing
out around 15 feet of wall space currently occupied by comic-book,
magazine and other storage boxes, by dusty piles of stuff, by one
leaning-to-the-right metal rack and two dusty, cluttered bookcases.
Clearing this space for my new bookcases will be a huge job, though
it will doubtless unearth lots of terrific items for my garage and
online sales.

One of my resolutions calls for me to go to the Fortress of Storage
once a week and bring back two boxes of stuff to process.  I might
have to push that resolution back a month or two to buy myself the
time to clear the office.  The more I think about the enormity of
these tasks, the more I feel like Mek-Quake:

What usually works for me is baby steps. Right now, I’m thinking I
should move stuff from my office into the downstairs family room,
which won’t be much in use after the holidays and, simultaneously,
clear non-Tony stuff out of the reading room.  The non-Tony stuff
are games, stuffed animals and various toys my kids outgrew a long
time ago.  Since they’ve given me the okay to dispatch these items
as I see fit, I’ll be making donation runs to various charities in
the New Year.  If there’s anything that might be of interest to my
garage sale customers, I’ll put it aside.

Thanks for letting me think out loud.  That sounds like a plan and
it should start collapsing in three...two...one...

My holiday season has been pretty darn spiffy.  I had a fun lunch
with Herd brothers Bob Ingersoll, Roger Price and Thom Zahler at a
place called Burgers Plus Beer. I had a burger, fries and a Pepsi.
Banter ruled, lives were caught up on and presents were exchanged.
Though the origins of the Herd are shrouded in mystery, please be
assured we pose no threat to good people.

My birthday and Christmas were equally joyous.  I spent fun times
with family and friends while giving and receiving excellent swag.
Don’t you just love it when the gift you’re giving someone is just
the right gift and to see that reflected in their face?  Receiving
excellent swag notwithstanding, those are the moments that delight
me most.

I watched some movies with the kids.  The Dark Knight Rises made me
glad I hadn’t spent money seeing it in a theater.  I got this movie
from the library and was profoundly disappointed.  I’m thinking I
need to write about it somewhere.

We also watched my new Blu-ray of Marvel’s The Avengers.  I loved
it as much the second time as I did the first.  It remains my pick
for the best super-hero movie and all time.  Heck, DC should just
give up and ask Marvel to make all its future super-hero movies for
it.  Because DC just doesn’t have it and apparently doesn’t have a
clue how to get it.

If you get The Avengers, watch the “Item 47" short that’s included
on the disc.  It’s fun and I hope we see these characters in that
new S.H.I.E.L.D. series that’s in the works.

I hope your holidays have been as happy as mine.

There’s an anonymous coward who attempts to post comments to this
blog on a regular basis, so regular that it’s become clear I am the
center of his universe.  His comments are insulting drivel, which
is why I never approve them and why you never see them.

Some of my closest friends have seen them because, quite honestly,
they are hilarious.  I may regret this, but, in the spirit of the
holidays, I’m going to share with you the coward’s latest attempted
posting.  He sent this in response to my birthday blog.

Wow! You're 61 years old...and have never earned a living wage.

No wonder you hate America and love the Marxist demagogue Obama. He
makes things "fair" for you. He takes from the evil "successful"
people and "redistributes" wealth to losers such as yourself.

So when do you think you'll finally break into comics? By your 70th
birthday? 80th? 100th?

Quite the charmer, isn’t he?

I’m sensing this person doesn’t care much for me.  But, clearly, he
fears me something fierce.  Because he’s never once signed his name
to any of his attempted postings.  Even so, I can’t think too badly
of him.  His crazy comments crack me up.

This is a one-shot special “one moment of fame” gift to this craven
and delusional fellow.  Consider it a fair exchange for how good he
makes me feel about myself every time he spews his nonsense in my
direction.  For me, his posts are a minute of bizarre comedy.  For
him, it’s his life.  How sad for him.