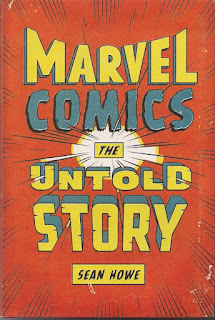 No volume of comics history has ever made me feel as sad as Marvel
Comics: The Untold Story by Sean Howe [Harper; $26.99] and that’s
coming from me, the guy who has often said that the history of the
comics industry is the history of comics creators being screwed by
publishers, editors and even their fellow creators.  It’s taken me
several attempts to push through that sadness to write what isn’t
at all a proper review of Howe’s book.

The Untold Story is a well-written if sensationalistic history of
Marvel Comics.  Not without some justification, Howe’s book almost
invariably portrays industry people (bosses and workers alike) at
their most venal.  However, credit to Howe, this is a page-turner.
I have no doubt the uninvolved will relish its revelations and not
give much heed to whether or not they are accurate.

Understand, I am not accusing Howe of any knowing fabrications in
this book.  Nor am I verifying any of them that do not pertain to
me directly.  But, as I’ve also said on several occasions, we are
all the heroes of our own stories.  Howe interviewed many people in
the preparation of this book.  I suspect, knowingly or otherwise,
they tried to put themselves in the best possible light.  We all do
that.  I recognize this in myself as I recognize it in others and
it’s the reason I try (and certainly do not always succeed) to tell
my own stories as accurately as possible.

My sadness comes from knowing so many of the people who Howe writes
about.  The occasions when those people suffered misery saddens me
because they mostly didn’t deserve that.  The occasions when they
were the architects of someone else’s misery saddens me because I
have always wanted comics creators to be better than that.  So, for
me, someone involved in several of the events and who knows, loves
and admires many of the players, the book is far more sad than it
is fascinating.

And thus I vent for a moment before continuing...

Howe did not interview me for this book.  That doesn’t bother me as
much as it bothers some of my readers.  God bless them for how much
they love my writing, but I think a realistic assessment of my role
in Marvel Comics history is that I was a damn fine utility player
who took whatever position needed playing, did it as well as or
better than most and managed to write some memorable stories
along the way.  I was on staff at Marvel for less than four years
all total.  I was out of the loop as often as I was in the loop.

Early on in my reading of this book, I decided I would only address
the handful of mentions of me in the book.  I tended to avoid the
office dramas as much as I could.  Almost every woman I dated while
living in New York was not involved in the comics industry or even
comics fandom.  I hung out with non-comics friends almost as much
as with comics friends...and I tried to keep both “sides” separate.
I figured out early on that, as much as I loved comics and working
in comics, I would occasionally need a break from comics.

Before I address those specific mentions of me in this book, I want
to make an opening statement of sorts.  I enjoyed my time working
in the Marvel Bullpen, especially when Roy Thomas was the editor-
in-chief.  I learned a lot from Roy, Sol Brodsky, Stan Lee and many
others.  I thought my hard work was appreciated as much as anyone’s
hard work could be appreciated in the comics industry.  I have fond
memories of my co-workers.

Over the years, I’ve come to the opinion that the Marvel writers of
my time there constituted the best writing staff in comics before
and since that time.  In a company often unfairly considered to be
no more than a comic-book fast food joint, Marvel had a whole lot
of extremely talented writers all of whom brought their own voices
to the work.  When I compare myself to guys like Roy, Steve Gerber,
Don McGregor, Steve Englehart, Doug Moench, Archie Goodwin, Chris
Claremont, Jim Starlin, Marv Wolfman and Bill Mantlo, I’m clearly
an “also present.”  If my writing was memorable, it was because I
was playing on the same field with those writers.

Howe first mentions me on page 127:

Tony Isabella, a devout Catholic and a copyboy at the Cleveland
Plain Dealer, moved to New York to assist Sol Brodsky, who’d
returned to Marvel and was overseeing repackaging comics for the
British market. Isabella also began helping out with the monster
magazines.

That paragraph is mostly accurate.  Based on my introducing Jesus
into the cast of Ghost Rider, I can see why someone would assume I
was a devout Catholic.  But, at the time I wrote those stories, I
hadn’t been inside a church in years.

While living with my parents and working for the Plain Dealer, I
quickly figured out that, as long as I left the house for about an
hour on Sunday mornings, they assumed I was going to church and not
one of the local diners for breakfast.  I moved out of their house
before I moved to New York, which meant I could dispense with that
routine.  And, to the best of my recollection, I never stepped into
a church while I lived in New York.

I suppose you could call me a Christian back then...since I tried
to do what Jesus would do to the best of my ability.  But “devout”
remained off the table.  Adding Jesus to the Ghost Rider series was
a fantasy/mythology thing to me.  I thought there needed to be some
sort of counter to all the Satan-types in the Marvel Universe.  I
dabbled with born-again Christianity for a time until I figured out
I had gotten it right the first time.

It’s possible my co-workers believed me to be a “devout Catholic.”
It might explain why I was never invited to participate in the drug
use Howe describes in his book.  My New York drug experiences
were but thrice in occurrence.

The first occasion was because an artist and staffer convinced me
I should try pot.  I burned my lip, but otherwise had no reaction
to the demon weed.  On the other hand, that artist would turn into
a right-wing jerk in his later years, possibly proving that pot is,
indeed, a gateway drug to asshat behavior.

The second occasion was...I asked Duffy Vohland to get me some pot
as a birthday present for a woman I knew.  I wasn’t dating her, but
she was a terrific friend and, at the time, I thought this was just
a really good idea for a gift.

The third occasion was...when a woman I was dating smoked some of
that pot when we were all together.  I wasn’t smoking, but, because
she thought I should, she would inhale and then give me these long
soulful kisses.  I rather enjoyed that.  I might have gotten a bit
high at the time, but I’m not convinced it wasn’t because the lady
was such an amazing kisser.

I pause here so my children can utter a collective “eww!”

We’ll return to Marvel Comics: The Untold Story and my own untold
stories tomorrow.  See you then.