GET MORE TONY: THE GARFIELD SHOW 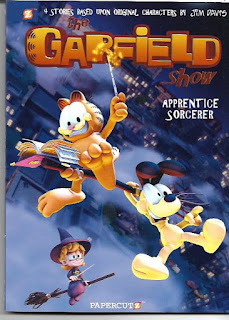 While you’re waiting for the bloggy thing to resume, why not check out The Garfield Show #6: Apprentice Sorcerer [Papercutz; hardcover $12.99, paperback $7.99]? This is the American edition of the two most recent French comics albums produced by Dargaud Media. Here’s how this works...

Dargaud takes screen shots of The Garfield Show and turns them into comic-book pages. These stories are adaptations of the cartoons you see on television.

The albums are translated from French back to English. That’s when editor-in-chief Jim Salicrup sends them to me. I get the art pages and the translations and the original English language television scripts.

My job is described as “dialogue restoration.” I try to restore as much of the original scripts as the art and space allows. I write some new dialogue here and there as necessary or sometimes because I’m just having so much fun working on these stories. When I’ve written the new restored script, legendary lettering guy Tom Orzechowski does his magnificent thing.

I love working on these books. Mark Evanier, who produces and does most of the writing for the show, is one of my dearest and oldest friends. Tom Orzechowski, a pal from my pre-Marvel days in comics fandom and another old/dear friend, got his first professional gigs from me. Jim Salicrup is another old/dear friend who has hired me to write stuff for him at three different publishers. In short, I am having fun and working with three great pals.

Buy this book and get it on the fun.

Posted by Tony Isabella at 6:38 PM