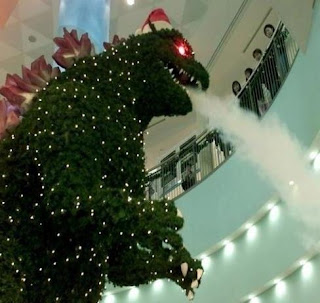 Some of you know I have a 200-plus-item bucket list of the things I want to write before I kick the bucket. However, I have another, less focused bucket list, which I have cleverly named “My Other Bucket List.” The items on that list include actual goals, flights of fancy, life-hacks and downright silliness.

People seemed to enjoy them, so, every other month, I compile them into a bloggy thing for your edification and entertainment. In the even months I don’t post “My Other Bucket List” items. Instead, I post items that fall into the “Things That Piss Me Off” category. You’ll get a list of those tomorrow.

In the meantime, here’s the MOBL items for January with additional comments in italics:

January 1: Do much better with my end-of-the-year holiday planning. Get everything done early so I can enjoy said holidays.

January 2: Get or make a Godzilla Christmas tree. Convince Sainted Wife Barb to let me put it up.

January 3: Start copying my favorable reviews to Amazon and maybe help those creators sell a few more books and movies. This one has been an epic failure, but, hopefully, will not remain so.

January 5: Go to the Stay Classy bar, 174 Rivington Street in New York City. It has a Ron Burgundy/Will Ferrell theme.

January 6: Brush up my Shakespeare by rereading and reexamining all of the Immortal Bard’s plays.

January 8: Catch up with Marvel’s Agents of SHIELD before its next new episode. Read all the recent SHIELD comic books as well. Guess who failed miserably on this one.

January 10: Write an updated version of Dumbo as a graphic novel, prose novel or screenplay.

January 11: Help my kids make good decisions, even though they are now adults. Luckily, I remember all my bad decisions.

January 12: Our world is both wonderful and terrible. I will strive to concentrate on the former.

January 13: Paint my van in psychedelic colors, teem up with four teenagers and a big dog, solve mysteries.

January 14: Get me some “my people” to handle the life and career details so often beyond my meager capabilities.

January 15: Get every volume of The Complete Chester Gould's Dick Tracy; read them from start to finish.

January 16: Get every volume of The Complete Peanuts and read them from start to finish. I decided to buy the volume with President Obama’s foreword and work backwards until I hit the ones I already have. I’ll probably take the same “buy most recent volume” with the Dick Tracy, Judge Dredd and Modesty Blaise books.

January 17: Get every volume of Judge Dredd: Complete Case Files;  read them from start to finish.

January 18: Get all the Modesty Blaise graphic albums; read them from start to finish.

January 20: Read Will Eisner’s The Spirit Archives, then read all the Spirit stories that followed those stories.

January 21: Create a shipping area for online Vast Accumulation of Stuff sales in our downstairs family living room. I have actually done this one. Now all I have to do is fine the time to resume my online sales.

January 22: Try to reach my daily Fitbit goals by the middle of the year. My goal was 5000 steps a day in January, 6000 in February, 7000 in March and so on. January and February were easy, but March has proved dicey so far because my vast accumulation of work keeps me at my desk for several hours each day.

January 23: Start using the Kindle Fire I got for Christmas 2014 now that I've actually activated it. Done. The first book I bought and read was Night of the Crabs, the first book in the giant crabs series by Guy N. Smith. I’m now reading The Talented Miss Highsmith by Joan Schenkar.

January 25: Do a Black Lightning project that has a cover painting by Alex Ross.

January 27: Have lunch with a friend at least once a week. (Another epic failure, but, with nicer weather coming, I hope to make this a reality.)

January 28: Do ten kindnesses a week for people I love, for friends in comics and for people I don’t really know. I manage this most weeks.

January 29: Eat a meal at every restaurant at Walt Disney World’s EPCOT.

January 30: Strive to be so darned pleasant that people wonder what I’m up to. A Twitter poster gave me his vote for the nicest guy at Pensacon, so let’s call this one a tentative win.

January 31: Figure how to deal with my seasonal affective disorder so next January is more productive than this January.

I’ll be back soon with February’s “Things That Piss Me Off” list. See you then.